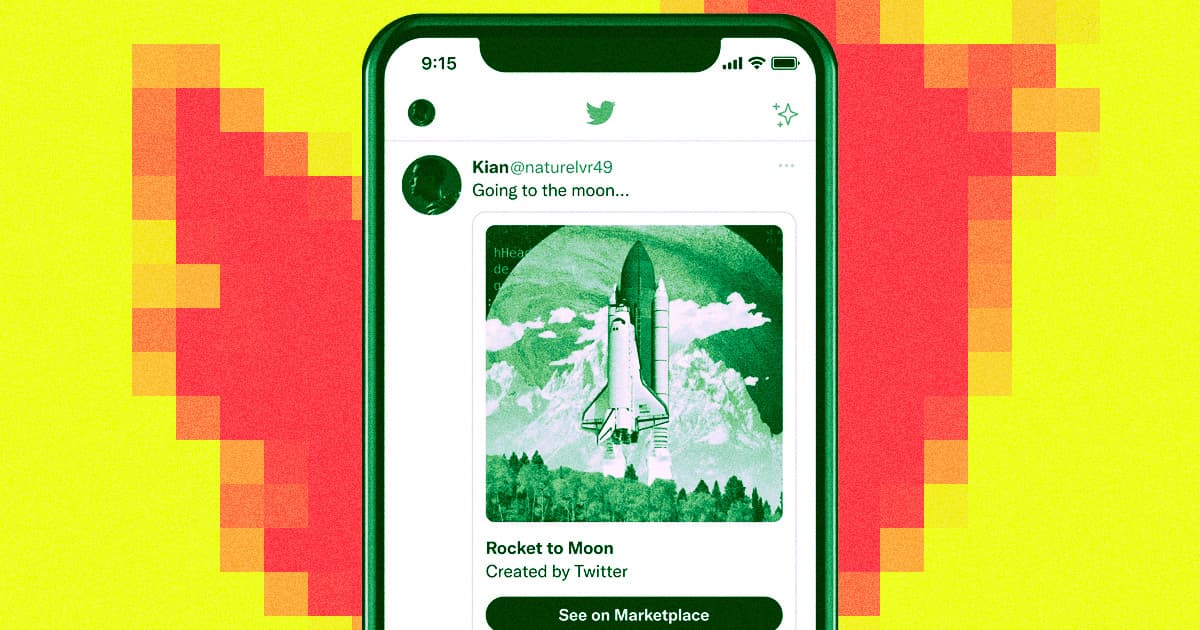 This is certainly curious.

This is certainly curious.

While the world was seemingly watching as Tesla and Space Elon Musk officially got the keys to Twitter, the social network quietly announced that it would allow users to buy and sell non-fungible tokens (NFTs) from select marketplaces via tweets.

Announced at almost the exact same time that the Musk deal went through, Twitter said its "NFT Tweet Tiles" are currently being beta tested by select users and will work in tandem with the Magic Eden, Rarible, Dapper Labs, and Jump.trade marketplaces, which are all on different blockchain protocols.

Per the announcement, NFT Tweet Tiles will expand links to trade on these marketplaces with larger photos of the NFTs in question, as well as information about its artist.

Some links to NFTs on @rarible, @MagicEden, @dapperlabs and @Jumptradenft will now show you a larger picture of the NFT alongside details like the title and creator. One more step in our journey to let developers impact the Tweet experience. pic.twitter.com/AkBisciB1i

This new feature appears to be an expansion of other "tweet tiles" experiments, which allow legacy publishers like the New York Times and Wall Street Journal to have tweet cards that expand links in-app. When Twitter announced tweet tiles in August, the company said that it was meant as a door-opener for "future innovation" in the company's developer community.

In a statement to Decrypt, a Twitter representative noted that the new NFT feature is not yet available to all users — but once it is, it won't require a Twitter Blue subscription, which was required for NFT profile photos.

The timing of the integration announcement is certainly curious, especially given that Musk has been known to make fun of cryptocurrency — and NFTs in particular — repeatedly on the site he now owns. In December of last year, he went so far as to joke that they were a sign of mental illness, and in January of this year, he said that he found Twitter's hexagonal NFT profile pic feature "annoying."

As with everything else related to the mercurial world's richest man, it's very much within the realm of possibility that he's changed his mind about NFTs — and we're curious to see how that will play out now that he's the owner of Twitter.

More crypto crazies: Developers are Transforming the Fyre Fest Island Into an Exclusive Colony for Crypto Millionaires, Because of Course They Are