Logan Paul Says His NFT Game Isn't a Scam, He Just Hired Scammers to Build It and They Did Some Scamming

"He took zero accountability. Zero apologies. He just wants to save his own reputation." 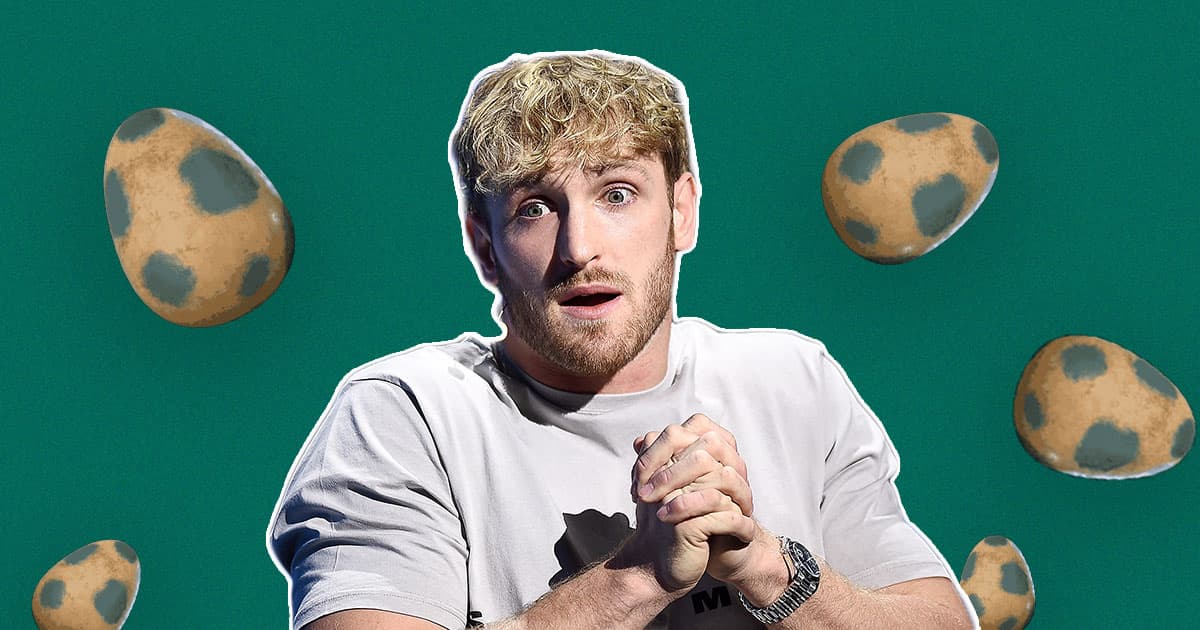 Internet personality Logan Paul isn't just trading blows in the boxing ring. Now he's now scrapping to defend his NFT game CryptoZoo — and we can barely put down the popcorn.

The app, advertised as a "really fun game that earns you money," was meant to earn players passive income by allowing them to hatch and breed NFT "eggs." Sounds legit, right?

As of right now, though, the app has failed to materialize while it's "undergoing upgrades to the core infrastructure of the ecosystem."

In short, it's exactly the kind of thing we'd expect from generic-sounding game that promises to miraculously earn you digital money, much like countless others in the NFT space. Remember Axie Infinity? And it's also just strangely anachronistic to see all this drama about NFTs after the market has thoroughly crashed this year.

After two weeks of radio silence — plenty of time for him to consult his lawyers — Paul has released a response video, lashing out at Findeisen and accusing him of spreading gossip without sufficient research.

Paul's explanation? He says that he accidentally hired scammers of his own to develop the app, who then did some scamming. Paul called out several "bad actors," who he says may or may not have stolen millions of dollars from investors — he remained vague while making this point in his video — but were later fired.

Paul throws his CryptoZoo team under the bus in the rejoinder, saying "that’s what I get for trusting the team that I relied on to vet and manage" new hires.

Paul's claim is that he and his manager Jeff Levin "made no money and will never make any money on CryptoZoo. In fact we only lost money trying to pick up the pieces."

In other words, Paul says he's innocent because he accidentally hired con men who did all the dirty work, not him.

If that's true, it's yet another damning indictment of the crypto industry writ large, which talks a huge talk but time and again gets sucked into scams, fraud, and general drama.

Besides, accusing somebody of failing to do their homework while admitting you mistakenly hired fraudsters is ironic to say the least.

"The fact Logan is suing me instead of the criminals and con men he hired says it all," Findeisen told Kotaku. "He took zero accountability. Zero apologies. He just wants to save his own reputation."

It's a bad look for an internet personality who has already struggled to maintain his reputation. Paul has spent years trying to salvage what was left of his image after visiting and uploading footage of a "suicide forest" in Japan back in 2017, a horrifying misstep that made him synonymous with trashy YouTube clickbait.

So far, it doesn't seem like his foray into the NFT is destined to helping much.

READ MORE: Logan Paul Says Some Of His NFT Game Devs Were 'Con Men,' But He Didn't Scam [Kotaku]

More on NFTs: It Turns Out Trump's Wretched NFTs Were Plagiarized

Read This Next
Sad!
Donald Trump's NFT Collection Is So Fantastically Ugly That Even His Biggest Fans Are Aghast
nvm
NFT Marketplaces Say Oops, Paying Royalties to Artists Is Optional Now
New Kid on the Block
The Latest Idea to Make People Actually Buy NFTs: Throw in a House
Rug Pull
CNN In Hot Water With Investors After Canceling Its Weird NFT Project
Anonymous Allegations
Anonymous Declares War on Bored Ape Yacht Club Over Alleged Nazi Symbolism
More on Blocknik
Girlbosses
Yesterday on the byte
"Cryptoqueen" Accused of Stealing Billions Suddenly Surfaces
Their Minds...
Jan 28 on the byte
Business Geniuses at Amazon Hard at Work on Hot New Idea: NFTs
Floored Apes
Jan 27 on the byte
Yuga Labs Says Its Bored Apes Are Absolutely Copyrighted, Thank You Very Much
READ MORE STORIES ABOUT / Blocknik
Keep up.
Subscribe to our daily newsletter to keep in touch with the subjects shaping our future.
+Social+Newsletter
TopicsAbout UsContact Us
Copyright ©, Camden Media Inc All Rights Reserved. See our User Agreement, Privacy Policy and Data Use Policy. The material on this site may not be reproduced, distributed, transmitted, cached or otherwise used, except with prior written permission of Futurism. Articles may contain affiliate links which enable us to share in the revenue of any purchases made.
Fonts by Typekit and Monotype.