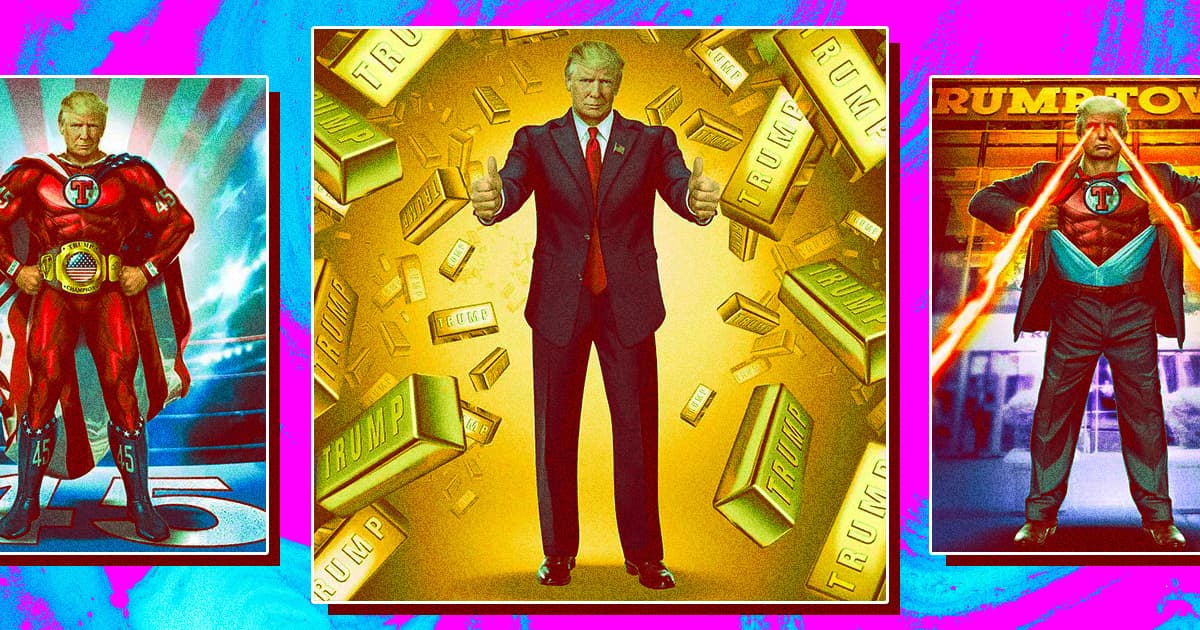 Man of the People

It Turns Out Trump's Wretched NFTs Were Plagiarized

Remember last week, when former president Donald Trump unleashed upon the Earth a collection of absolutely grotesque NFT "trading cards?" Well, turns out that much of the art on the 45,000 digital cards, which sold for $99 a piece, were likely plagiarized. Cheers.

It's not exactly surprising news, but cursed information nonetheless. According to Gizmodo, most of the art appears to be taken from small clothing companies, and the apparent theft was indeed so poorly hidden that a quick reverse-image search was all that was needed to identify the apparent original.

It's unclear whether the photoshop job was done by a human or an AI image generator, but the similarities between the "digital trading cards" and the seemingly lifted images are remarkable nonetheless. And considering that Trump, who's currently running for president, reportedly raked in revenue to the tune of $4.5 million off the fugly JPEGs in a single sell-out launch day, their being plagiarized would be a pretty gross turn.

Plagiarism aside, the behind-the-scenes of these cards gets even stranger.

As Gizmodo reports, the company that held the auction, NFT INT LLC, is wildly sketchy — its address is listed as belonging to a UPS box at a random strip mall in Utah, and their website makes it very clear that the cards "are not political and have nothing to do with any political campaign," and that the company is definitely, one hundred percent, certainly not owned and operated by "Donald J. Trump, The Trump Organization, CIC Digital LLC or any of their respective principals or affiliates." Cool.

Man of the People

Heavy sigh. This whole thing has really just been strange, and given the fact that the whole ordeal feels predatory, it's all a bit infuriating, too.

It's hard to scrape up a ton of sympathy for anyone who dropped $4,500 for a chance to have dinner with the "grab 'em by the p**** guy," but at the same time, the Trump base likely isn't too hip to the absolutely dismal state of the NFT market. Mix in the fact that these images were not only unimaginative, but very likely stolen? It's got scam written all over it.

But alas, the guy clearly knows he's got an audience.

More on the cursed Trump NFTs: Donald Trump's NFT Collection Is So Fantastically Ugly That Even His Biggest Fans Are Aghast