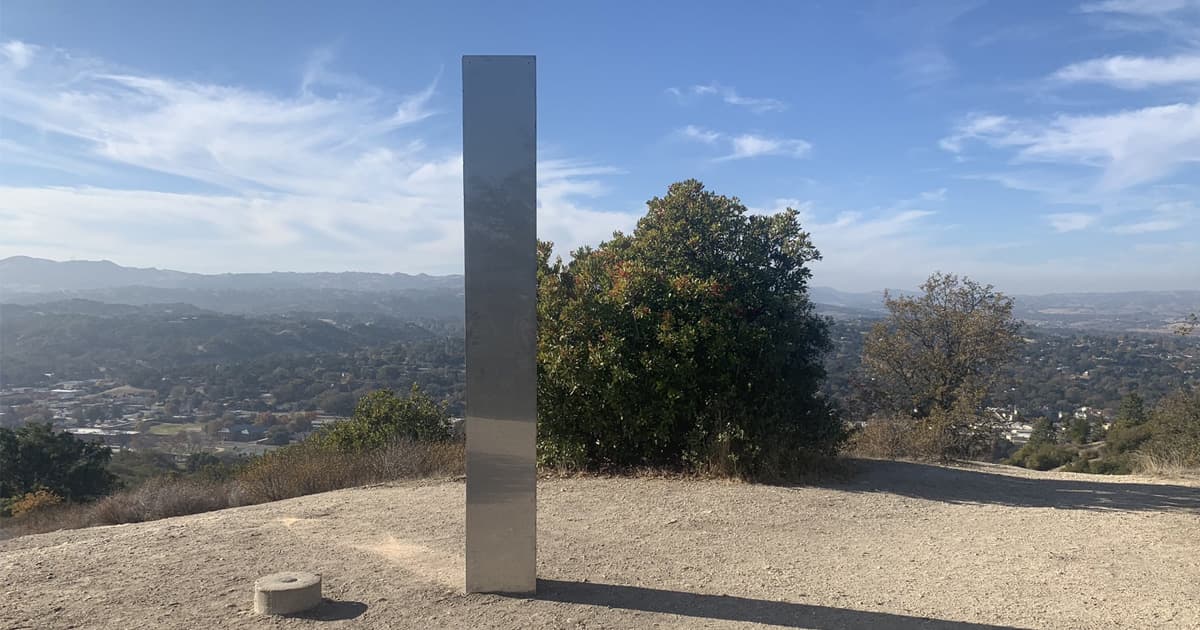 A third monolith has appeared.

A third monolith has appeared.

Okay, seriously, who's doing this? Knock it off.

A third monolith has appeared on top of Pine Mountain in Atascadero, California, as spotted by local news correspondent Connor Allen.

There is currently a monolith at the top of Pine Mountain in Atascadero!!

Unlike the "amateur welder" travesty that was the second monolith found near a famous archeological site in northern Romania, this monolith appears to be as pristine as — or perhaps even shinier than — the first one, discovered in the Utah wilderness late last month.

Is it a marketing stunt? Aliens playing a joke? We still have zero clarity on the origins or purpose behind the strange structures.

It's the same triangular design made out of stainless steel, and stands about ten feet tall. Strangely, this monolith wasn't anchored to the ground like the one found in Utah and could easily "be knocked over with a firm push" according to local news outlet Atascadero News.

If past is prelude, we'll now be waiting for the roughly 200 pound installation to disappear overnight — just like the ones found in the Utah and Romania.

While we don't know how the Romanian monolith disappeared, we have a first-hand account of how a gang of four men toppled over the one in Utah late Friday evening and taking it with them.

More on monoliths: A Gang of Men Apparently Stole the Utah Monolith

Monolith Heist
A Gang of Men Apparently Stole the Utah Monolith
12. 1. 20
Read More
Dishonorable Discharge
Scientists Alarmed by Video of Deep Sea Mining Company Spewing Waste Into Ocean
Yesterday
Read More
Sing Me a Song
Google Officially Announces ChatGPT Competitor Called "Bard"
Yesterday
Read More
+Social+Newsletter
TopicsAbout UsContact Us
Copyright ©, Camden Media Inc All Rights Reserved. See our User Agreement, Privacy Policy and Data Use Policy. The material on this site may not be reproduced, distributed, transmitted, cached or otherwise used, except with prior written permission of Futurism. Articles may contain affiliate links which enable us to share in the revenue of any purchases made.
Fonts by Typekit and Monotype.