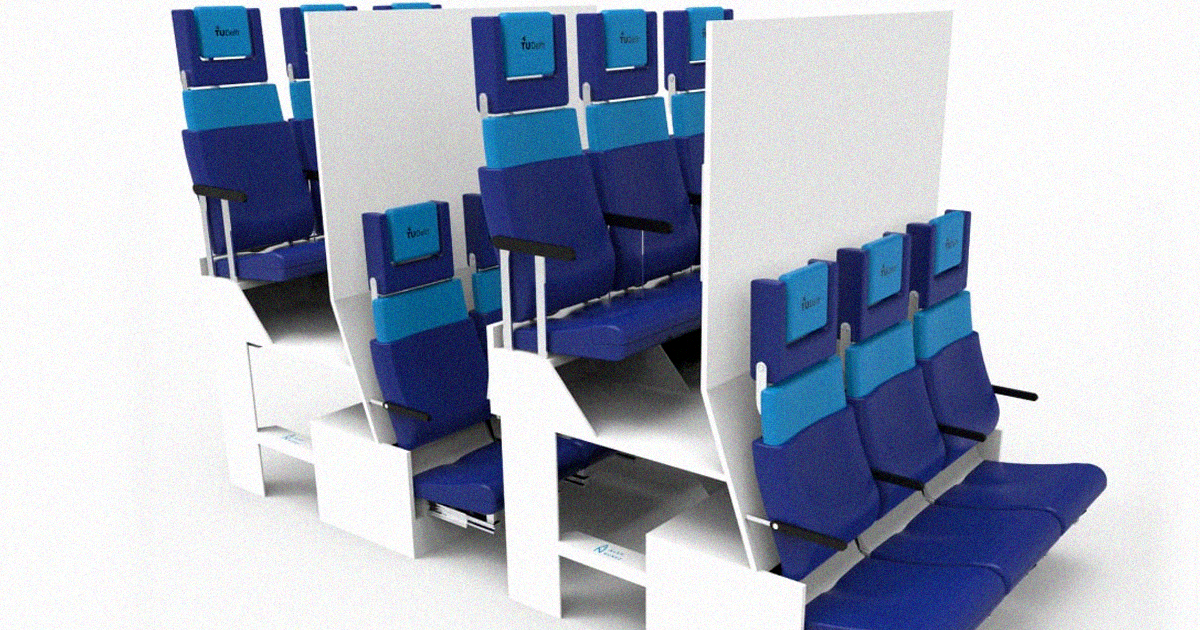 Close quarters. Armrest battles. That one passenger who chooses evil by eating eggs in a flying metal can. For most, flying coach is not exactly a great time.

But just you wait! Economy travel may just get worse. Meet the Chaise Lounge Airplane Seats, a proposal for a bunk-like jetliner layout wherein one passenger sits in a fairly comfortable-looking seat a few steps up, while an unlucky joe suffers the flight in a L-shaped space below, their face just a foot or so away from Top Bunk's derriere.

It also appears as if working on a laptop or even reading a book would be uncomfortable or even impossible, due to the lack of arm room.

The double-decker hellscape was presented this week by its creator, 22 year-old Alejandro Núñez Vicente, at the 2022 Aircraft Interiors Expo in Hamburg, Germany, CNN Travel reports. Honestly, we're not sure this is a humane future of air travel.

The Chaise Lounge monstrosities — which debuted for the first time last year and, unfortunately, was received extremely well by airline execs — were originally designed to suit the cutting-edge Flying-V jetliner, an innovation still many years away from mass use.

Alas, according to CNN, the double-deck designer says that these seats need not await the experimental aircraft — they could be outfitted for the Boeing 747, Airbus A330, and other wide-bodied planes. Cheers.

Despite the criticisms leveraged against the model — of which the young innovator is well-aware, CNN reports — Núñez Vicente is intent on making his claustrophobic cocoons a reality. He's actually refreshingly candid about why the negative judgement doesn't really phase him — and likely won't phase any airlines looking to buy in.

"One of the phrases I get a lot, is 'if it's not broken, why change it?'" Núñez Vicente told CNN. "If passengers still fly in the worst economy class seats, why are we going to give them a better option? It makes money. That's the goal of the airline at the end of the day, not to make your flight better."

Hard hitting! Given our experience of money-saving travel, this checks out. We gotta say, though — while we appreciate an honest take, pushing people to the limits of discomfort because they can't afford more, especially as plane ticket prices continue to rise, maybe isn't the best line to live by.

READ MORE: A Horrifying Proposal for Airplane Seating Confirms the Future of Coach Is Being Knocked Unconscious [Slate]

Deadly Development
Whistleblower Says Boeing 787 Oxygen Masks Don't Work
11. 6. 19
Read More
Nose Dive
Pilots Were Worried About Boeing 737 Max Before Deadly Crash
3. 13. 19
Read More
Airplane Noise Can Be Reduced With a Simple Solution
3. 9. 18
Read More
+Social+Newsletter
TopicsAbout UsContact Us
Copyright ©, Camden Media Inc All Rights Reserved. See our User Agreement, Privacy Policy and Data Use Policy. The material on this site may not be reproduced, distributed, transmitted, cached or otherwise used, except with prior written permission of Futurism. Articles may contain affiliate links which enable us to share in the revenue of any purchases made.
Fonts by Typekit and Monotype.