Pilots Were Worried About Boeing 737 Max Before Deadly Crash

"The fact that this airplane requires such jury rigging to fly is a red flag." 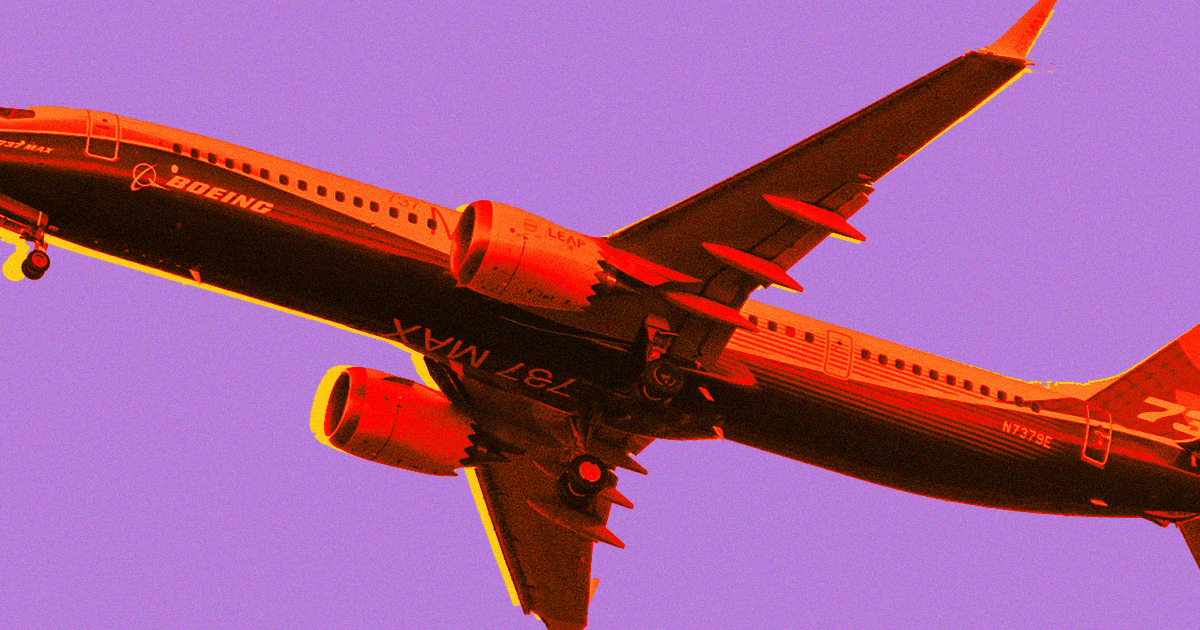 Boeing has a lot of questions to answer.

Its 737 Max passenger jetliner was supposed to provide more comfort for passengers and better fuel efficiency. But the plane's reputation has been tarnished by two recent crashes that have captured international attention: October's Flight 61, operated by Indonesian airline Lion Air and which killed 189, and a second crash only four months later of Ethiopian Airlines flight 302 which killed more than 150.

Now more bad news is coming out for the aerospace giant: pilots have reportedly been complaining about the jet's automatic flight features since before the latest crash.

"The fact that this airplane requires such jury rigging to fly is a red flag," said an unnamed pilot in a November statement to the Federal Aviation Administration (FAA) in the aftermath of the October crash, as quoted by Politico. The pilot had reportedly experienced the aircraft pitching its nose down within seconds of turning on the feature back in November.

The 737 Max 8's futuristic Maneuvering Characteristics Augmentation System (MCAS) automatically adjusts the pitch downwards to reduce the risk of stalling the engine. It turns itself off automatically when the angle of attack — essentially the horizontal angle of the plane — is sufficiently lowered.

Or at least, that's how it's supposed to work.

"Now we know the systems employed are error prone — even if the pilots aren't sure what those systems are, what redundancies are in place, and failure modes," the pilot said in the FAA statement. "I am left to wonder: what else don't I know? The Flight Manual is inadequate and almost criminally insufficient."

Despite the flagged issues, the exact link between the MCAS anti-stall system and the two deadly crashes has not been confirmed by authorities.

A preliminary report by Indonesian investigators found that the 737 Max 8 plane was "not airworthy" weeks after the deadly crash. The investigation also found that the plane's nose dove down repeatedly, even when it wasn't stalling.

Boeing was clear in its response to the report: "As our customers and their passengers continue to fly the 737 Max to hundreds of destinations around the world every day, they have our assurance that the 737 Max is as safe as any airplane that has ever flown in the skies."

The FAA has yet to follow a large number of countries in banning the use of Boeing's 737 Max altogether. Its reasoning: it's too early. "Thus far, our review shows no systemic performance issues and provides no basis to order grounding the aircraft," reads a statement from yesterday.

READ MORE: From the flight manual to automation, why pilots have complained about Boeing's 737 MAX 8 [USA Today]

Read This Next
It Was the Tesla
Manslaughter Case Has a Strange Twist: Tesla That Killed Couple Was on Autopilot
Full Self-Delusion
Survey: 42% of Tesla Autopilot Drivers Think Their Cars Can Entirely Drive Themselves
Streisand Effect
Hurry Up and Watch These Videos Tesla Wants Removed From the Internet
tesla recall
Tesla Accused of Shutting Off Autopilot Moments Before Impact
Junk in Trunk
Oh Great, They’re Filming Porn Inside Teslas on Autopilot
More on Advanced Transport
Out With a Bang
Tuesday on the byte
Driver Says His Ford F-150 Lightning Made a "Loud Boom" and Died When He Plugged It In
Deep in a Hole
Tuesday on the byte
Something Very Weird Is Going on at Elon Musk's Boring Company
Pizza Personnel
Nov 23 on the byte
Domino's Buying Hundreds and Hundreds of Electric Delivery Vehicles
READ MORE STORIES ABOUT / Advanced Transport
Keep up.
Subscribe to our daily newsletter to keep in touch with the subjects shaping our future.
+Social+Newsletter
TopicsAbout UsContact Us
Copyright ©, Camden Media Inc All Rights Reserved. See our User Agreement, Privacy Policy and Data Use Policy. The material on this site may not be reproduced, distributed, transmitted, cached or otherwise used, except with prior written permission of Futurism. Articles may contain affiliate links which enable us to share in the revenue of any purchases made.
Fonts by Typekit and Monotype.