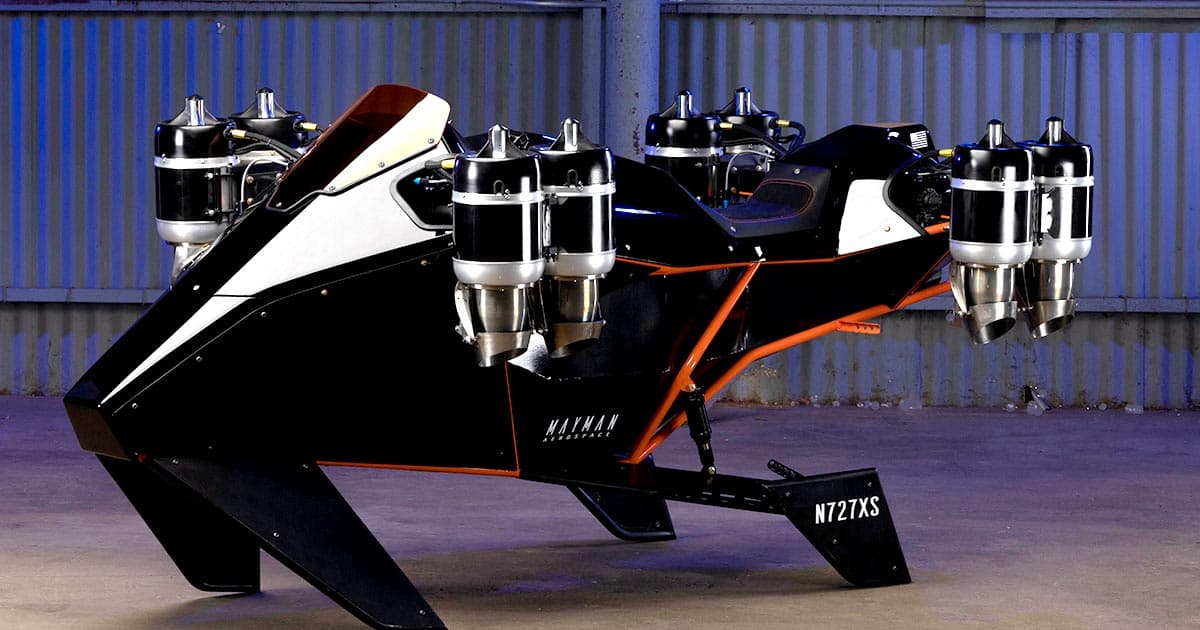 Startup JetPack Aviation has shown off its latest adrenaline-fueling invention: a prototype of its upcoming P2 Speeder flying motorcycle.

The vehicle, which it's calling an Air Utility Vehicle (AUV), features eight jet engines and is the third full scale prototype developed by Mayman Aerospace, a subsidiary brand launched by JetPack Aviation.

It's a refreshing change of pace — and an apparent sign of concrete progress. We've been swooning over renders of the machine for quite a few years now, but had to wait until now to see anything real emerge from the idea.

The company says the final iteration will be able to lift 1,000 pounds, cover 400 miles, and reach speeds of over 500 mph — if it ever gets a flight certification from the Federal Aviation Administration, that is. The company says it's working with the agency to make that happen.

"The Speeder AUV is a total game changer," primary investor Tim Draper, who's also shoveled money into SpaceX and Tesla, said in a statement. "It is one of the most exciting, industry disrupting technologies we’ve seen and we were thrilled to provide this platform for its first public unveiling."

The company is also eyeing the Speeder to assist autonomously during firefighting or medical evacuation efforts, according to its website.

JetPack Aviation is hoping to begin remote-controlled test flights later this year, with pilots taking control towards the end of the year.

The P2 Speeder is built with "maximum flight efficiency and ultra-safe system redundancy" in mind, according to a press release. That means that even if one of the eight jet engines gives out, the others can adjust their thrust to make sure the pilot doesn't spin out of control.

While it's exciting to see such a wild idea come to life in the form of a functioning prototype, getting this kind of vehicle to market will likely prove to be quite an undertaking, given the obvious safety hazards involved.

But still, we can't wait to see it take off.

For the First Time, a Civilian Pilot Flew a Jetpack
3. 28. 17
Read More
A New Jetpack is About to Take to the Skies
1. 15. 17
Read More
I Don't Like This Simulation
Fun Website Lets You Simulate an Asteroid Impact in Your Hometown
Yesterday
Read More
+Social+Newsletter
TopicsAbout UsContact Us
Copyright ©, Camden Media Inc All Rights Reserved. See our User Agreement, Privacy Policy and Data Use Policy. The material on this site may not be reproduced, distributed, transmitted, cached or otherwise used, except with prior written permission of Futurism. Articles may contain affiliate links which enable us to share in the revenue of any purchases made.
Fonts by Typekit and Monotype.