"A Cessna aircraft will cruise at 120 mph. We’re doing nearly four times that." 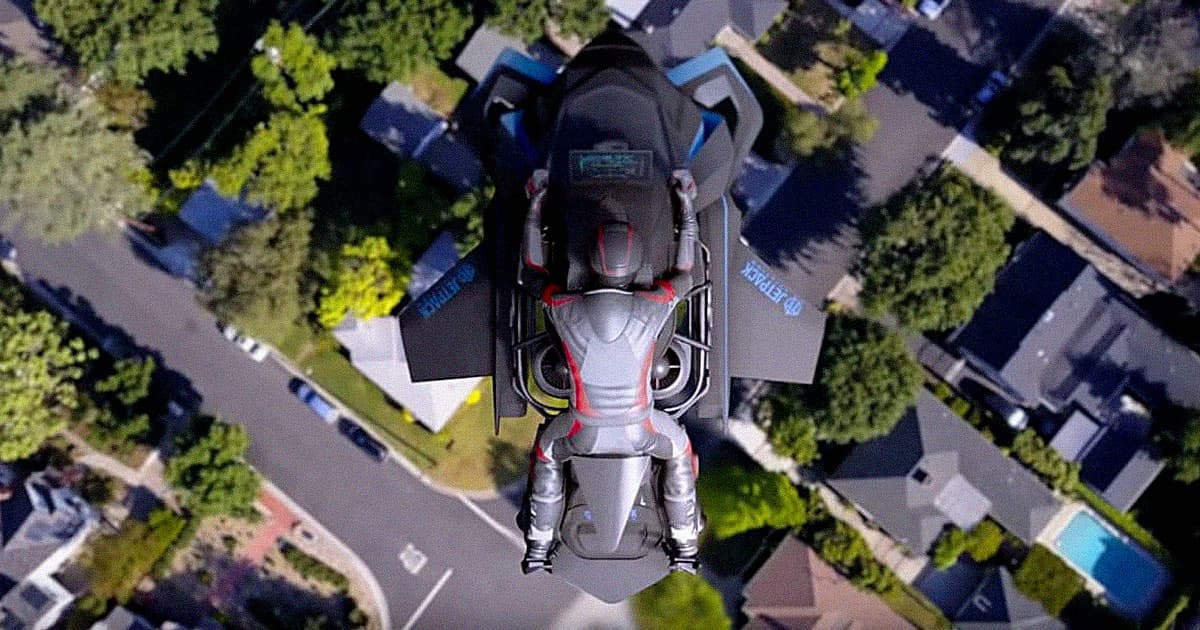 David Mayman, the founder of JetPack Aviation, says he fell in love with flight because with three uncles and a cousin employed as pilots, it's in his blood.

He didn't just want to fly planes, though. His 10-year-old company, based in California, creates jetpacks and trains both civilians and military personnel how to fly them — although at $4,950 for a two-day program, it's not for the casual enthusiast.

There's just one problem with this unusual career: Mayman himself is afraid of heights. In an interview primarily focused on JetPack Aviation's new flying motorcycle, called the Speeder, Mayman told us how he overcame that fear, why global military clients are purchasing Speeders for emergency response, and what he thinks aviation's future will look like.

The following interview has been edited for length and clarity.

Futurism: Let’s talk about the flying motorcycle. Who is it meant for?

Mayman: The Speeder is an aerial utility vehicle. To some extent it pivots away from the concept of a flying motorcycle, because when people think of motorcycles they think of recreation. The primary use case is really emergency response and disaster relief rather than recreational.

Imagine you’ve had a hurricane. Roads are damaged, you can’t get trucks on the road. You can swarm ten of these for less than you can fly one helicopter. They can fly pretty much in any weather — even if it's rainy and you can’t see the horizon. In our aircraft it really doesn’t matter. You could have a 40-50 mph wind and our craft will still be rock solid.

I think recreational use will be during Phase 2 or Phase 3.

Futurism: It can go up to 15,000 feet? That’s above the basic skydiving level.

DM: If it’s flying at 14,000 feet or 20,000 feet it will be doing that because it’s mountainous terrain. It’s typically designed to be flying 0-1000 feet above ground level. In the Himalayas you can fly at 20,000 feet but only be 100 feet above ground. It could be autonomously operated, perhaps shipping medical supplies where it has to fly at that altitude. A pilot would need O2.

Futurism: How fast is the Speeder?

Mayman: Incredibly fast. A Cessna aircraft will cruise at 120 mph. We’re doing nearly four times that. You would not do that piloted. If you can lay the pilot down like in a fighter jet then you could. That’s like, phase 3.

Futurism: And it can take three different kinds of fuel?

Futurism: How much will it cost?

Mayman: We haven’t announced it yet. The idea, one day, will be to bring it down to a very luxurious supercar.

Futurism: How many pre-orders do you have for it?

Mayman: We got about 50 pre-orders in a couple of hours and we shut it down. We’re not seeking letters of intent until we can demonstrate the aircraft. My feeling is the first thing anybody should say is "let me see it fly. Bring me to your test field."

Futurism: Do you have working prototypes?

Mayman: We’ve actually got two. We started with P1 and flight-tested that a year and a half ago. We’re working now on P2, a third full scale prototype. That’s the one that will look way more like the air utility vehicle we intend to take to market.

It’ll have a seat and flight controls. It won't be piloted at first. I’d love to, but the FAA has a pretty strict process. As a commercial aviator I need to take that seriously. It'll be either fully autonomously making its own decisions or remote-flown by a pilot. That could be with VR goggles or just watching the aircraft.

Futurism: When will delivery or production happen?

Mayman: I think we’re going to look at certification toward end of next year. Certification can take six months to a year, then after that go into production.

Futurism: Is personal aviation superior to individual vehicles, and is there a future where it’s common?

Mayman: There's no doubt in my mind that the urban air mobility movement will happen, but not soon.

There will be four or five seat vehicles. Just as there are SUVs that can carry several people, we’ll have the same kind in the sky at some point. We’ll have big people haulers. They’ll do intra-city routes pretty well. A downtown route will be highly sensitive because these things are not quiet no matter what anyone tells you. Any aircraft that creates thrust makes noise.

Also, how do we fly safely over people when we’re transiting? What’s the public perception? Are you ready to jump into a 5-person vehicle without a pilot and launch off a 50-foot building tomorrow?

Futurism: Could these vehicles ever be electric?

Mayman: The bigger the rotor system, the easier it is to make it electric, because the efficiency of propulsion is better. The smaller it is the more you have to accelerate.

Electric propulsion will be possible for very small aircraft but we have to wait for energy density to get to 1,500 watt-hours per kilo. Nobody has demonstrated a quantum leap yet in battery energy density. We're sitting at about 250 watt-hours per kilo now. That’s just individual cells, if you pack those cells into a pack, it drops from 250 to 200. If you then run that through a speed controller it runs down to 150. We’re ten times away from where we need to be.

Futurism: Can you talk about the JetPack deal in South-East Asia? What kinds of benefits will jetpacks provide a military client?

David Mayman: Getting emergency assistance to people in need of urgent care. That’s their focus. When it would be very difficult either because of traffic or terrain to dispatch a car or even a helicopter, it takes a lot longer than dispatching a jetpack. Primarily, the goal is to get hands-on medics to an injured person faster. There's heaps of research on that triage stage and what impact you can have on somebody’s health outcome if you can get to them.

Futurism: Do you need a military skillset to fly jetpacks? Or could civilians easily train and learn?

DM: We’ve trained ten times more civilians than we have military at this stage. Frankly the people who’ve had no experience do better than people who have aviation experience.

Futurism: So has Jeff Bezos bought a jetpack?

Mayman: We've been approached by well-resourced individuals. Where the price of a squadron wouldn’t be an issue.

Futurism: What are we leaving on the table?

Mayman: You know, I have a morbid fear of heights. My wife says the way you overcome fear is to do the most frightening thing. That's why I skydive. I’m nearly up to 1,000 and it still holds my attention every time. It’s so zen.

Futurism: Would you say the future is created by people who overcome fear? Is facing fear important in changing the world?

Mayman: All entrepreneurs and inventors face some form of fear because they are doing something new and unknown. Humans seek the known and predictability. We need to fight this to create the things we want to create.

More on the future of flight: An Experimental Flying Car Just Crashed During a Test

Read This Next
Plane Nonsense
Experts Don't Know Why Boeing 777 Doused Children With Jet Fuel
Futurism
Uber Plans To Launch Flying Taxis With Technology That Doesn’t Exist
Futurism
A Real-Life "Iron Man" Jet Pack Just Smashed World Speed Records
Futurism
For the First Time, a Civilian Pilot Flew a Jetpack
Futurism
A Jetpack Company Is Coming Out With Flying Cars
More on Advanced Transport
Netflix and Drive
Monday on futurism
Mercedes Claims to Have Achieved Level 3 Automation, Beating Tesla
Battery Trouble
Monday on the byte
Tesla "Spontaneously" Bursts Into Flames While Driving Down Freeway
High Tide
Jan 27 on the byte
We’re in Awe of Amsterdam’s Huge Underwater Bike Parking Garage
READ MORE STORIES ABOUT / Advanced Transport
Keep up.
Subscribe to our daily newsletter to keep in touch with the subjects shaping our future.
+Social+Newsletter
TopicsAbout UsContact Us
Copyright ©, Camden Media Inc All Rights Reserved. See our User Agreement, Privacy Policy and Data Use Policy. The material on this site may not be reproduced, distributed, transmitted, cached or otherwise used, except with prior written permission of Futurism. Articles may contain affiliate links which enable us to share in the revenue of any purchases made.
Fonts by Typekit and Monotype.