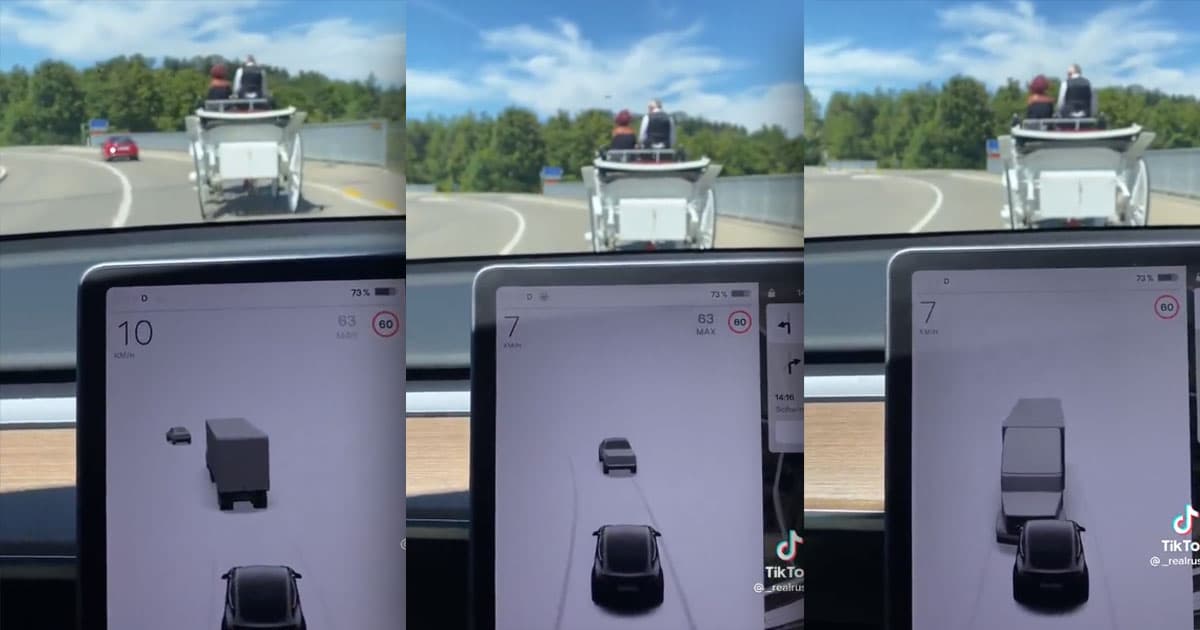 It's definitely none of those things.

It's definitely none of those things.

A new viral video, shared on TikTok, shows a Tesla vehicle getting mightily confused by a white, four-wheeled carriage being pulled by a horse.

The electric vehicle's self-driving software can be seen visibly struggling to cope, flipping between a number of wrong guesses ranging from a van being followed by a pedestrian to a backwards-driving semi truck.

Judging by the readouts on the infotainment screen, the video was filmed outside of Zurich, Switzerland, and it's unclear who was holding the reins.

The video is an excellent example of artificial systems struggling to come up with an explanation for unusual edge cases — and shows just how tricky it is for a driver assistance software to visually interpret and account for the vast range of things that can happen on public roads.

"I wonder how many carriages the model has seen during training," Igor Susmelj, co-founder of AI software company Lightly, mused in response to the video.

US regulators are also officially investigating the company over reports of collisions involving Tesla's Autopilot feature.

Tesla itself has hit considerable headwind in its efforts to develop a driver assistance feature advanced enough to take care of all driving. So far, all its systems require the driver to continue to closely monitor the road, and in late June Tesla cut around 200 autonomous driving-related jobs from an office in San Mateo, California.

In other words, the fact that the system didn't quite know how to correctly categorize a horse-drawn carriage shouldn't come as much of a surprise — and stamping out rare-but-serious errors like it will be necessary for Tesla to gain any serious ground in the tech.