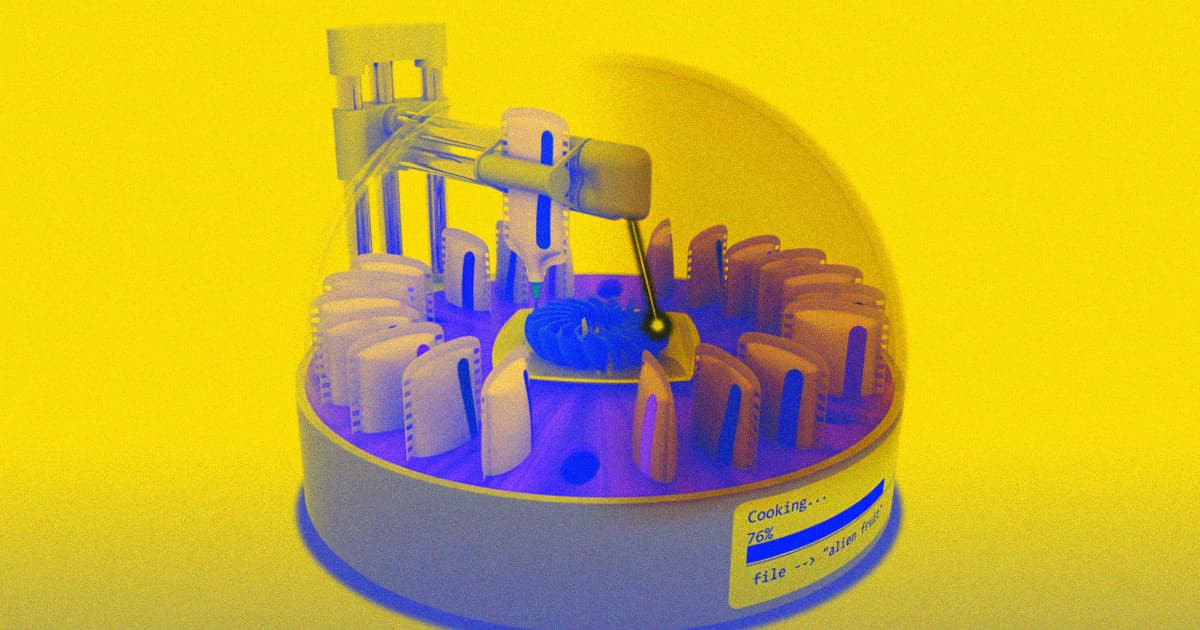 You can really taste the lasers.

You can really taste the lasers.

A team of Columbia University scientists built a sort of robot "chef" that 3D prints chicken breast cutlets — and cooks them with powerful lasers at the same time.

The lasers allowed for incredible cooking and heating precision, according to research published in the journal npj Science of Food earlier this month. The researchers behind the system told Ars Technica that they think their work will be a crucial part of preparing 3D printed meals, which aren't a good fit for conventional cooking methods.

"We noted that, while printers can produce ingredients to a millimeter-precision, there is no heating method with this same degree of resolution," study coauthor and Columbia mechanical engineer Jonathan Blutinger told Ars.

It's worth noting that the new robotic chef didn't solve the problem of lab-grown food. Unlike other researchers who are trying to create realistic cuts of entirely-synthesized meats, the Columbia scientists simply bought chicken from the store, pureed it, and then loaded it into the 3D printer. Yum!

Still, the end result was a reconstructed chicken cutlet that retained more moisture and shrank less than those cooked by more traditional methods, according to Ars. The researchers also learned that different lasers were better for different things: blue lasers were best for cooking the meat internally, while infrared lasers were better at browning the surface — even through a layer of packaging.

"Millimeter-scale precision allows printing and cooking a burger that has a level of done-ness varying from rare to well-done in a lace, checkerboard, gradient, or other custom pattern," the authors wrote in their paper. "Heat from a laser can also cook and brown foods within a sealed package... [which] could significantly increase their shelf life by reducing their microbial contamination, and has great commercial applications for packaged to-go meals at the grocery store, for example."

In an extremely small trial with two taste-testers, the laser-cooked chicken was the unanimous favorite. That, Ars notes, is even despite one taster picking up on a slight metallic taste from the laser.

"Ever go to the dentist and get fillings done?" the tester told the researchers, according to Ars. "They have a laser they use to seal the fillings and you get that smell — a little bit of an industry odor, a sharpness that you don't get with normal chicken."

Brands We Love
The Toybox 3D Printer Deluxe Bundle Lets Kids Print Their Own Toys
7. 17. 19
Read More
Helping Hand
This Autonomous Robot Arm Feeds People Who Can’t Feed Themselves
3. 14. 19
Read More
With Bees Scarce, A Drone Pollinates A New York Apple Orchard
6. 7. 18
Read More
+Social+Newsletter
TopicsAbout UsContact Us
Copyright ©, Camden Media Inc All Rights Reserved. See our User Agreement, Privacy Policy and Data Use Policy. The material on this site may not be reproduced, distributed, transmitted, cached or otherwise used, except with prior written permission of Futurism. Fonts by Typekit and Monotype.