This Autonomous Robot Arm Feeds People Who Can’t Feed Themselves

It understands the difference between a bite of banana and a bite of carrot. 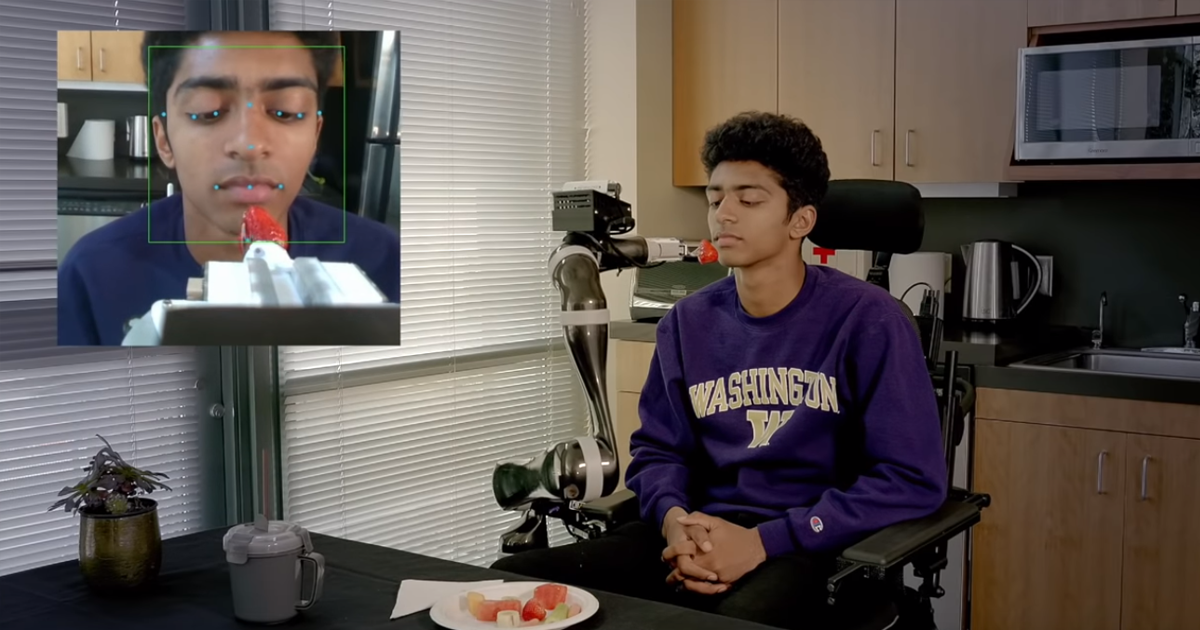 Image by Eric Johnson/University of Washington

An estimated one million Americans can't feed themselves. That leaves them little choice but to rely on another person at mealtime, which can be both awkward and time-consuming.

But now, researchers from the University of Washington have built Assistive Dexterous Arm (ADA), an artificially intelligent robot arm capable of using a fork to move food from a person's plate to their mouth — another encouraging example of how AI and robotics can help people with disabilities live more independent lives.

In a pair of recently published papers, the UW team describes how a pair of algorithms give ADA the ability to feed a person.

The first algorithm, RetinaNet, is an object-detection system. It scans a plate to determine the types of food on it, placing a "frame" around each item.

The second algorithm, SPNet, analyzes the food in a frame and sends instructions to the robot arm that let it know how to skewer the food in a way that'll be easy for a person to eat — it might instruct the bot to stab a piece of banana in its center, for example, but a carrot near one end.

Giving the system the contextual knowledge that not all food should be treated the same way was a key part of ADA's development process, according to researcher Siddhartha Srinivasa.

"If we don’t take into account how easy it is for a person to take a bite, then people might not be able to use our system," he said in a press release. "There’s a universe of types of food out there, so our biggest challenge is to develop strategies that can deal with all of them."

Once the robotic arm, which attaches to a wheelchair, receives its instructions from the algorithm, it relies on a system of sensors and cameras to skewer each piece of food with a 3D-printed fork and move it to a person's mouth so they can eat it.

While Srinivasa is hopeful that ADA will provide people who have trouble feeding themselves with a new level of independence, he doesn't see envision the system eliminating the need for human help altogether.

"Ultimately our goal is for our robot to help people have their lunch or dinner on their own," he said in the press release. "But the point is not to replace caregivers: We want to empower them. With a robot to help, the caregiver can set up the plate, and then do something else while the person eats."

Read This Next
From the Dept. of Things to Buy
5 Tasty Condiments That Aren't Pink Sauce
Futurism
With Bees Scarce, A Drone Pollinates A New York Apple Orchard
Futurism
Don’t Be Shy. This AI Robot Just Wants to Help You Get Dressed.
Futurism
Florida Man Becomes First Person to Live With Advanced Mind-Controlled Robotic Arm
Futurism
Sally Can Create and Serve 1,000 Different Meals, but This Chef's Not Human
More on Robots & Machines
FROM THE DEPT. OF...
Thursday on futurism
The Best Wired Earbuds in 2022
FROM THE DEPT. OF...
Thursday on futurism
The Best Gifts For Gamers in 2022
Egg Drop
Thursday on the byte
Former NASA Guy Drops Egg Out of Space, Tries to Keep It From Breaking
READ MORE STORIES ABOUT / Robots & Machines
Keep up.
Subscribe to our daily newsletter to keep in touch with the subjects shaping our future.
+Social+Newsletter
TopicsAbout UsContact Us
Copyright ©, Camden Media Inc All Rights Reserved. See our User Agreement, Privacy Policy and Data Use Policy. The material on this site may not be reproduced, distributed, transmitted, cached or otherwise used, except with prior written permission of Futurism. Articles may contain affiliate links which enable us to share in the revenue of any purchases made.
Fonts by Typekit and Monotype.