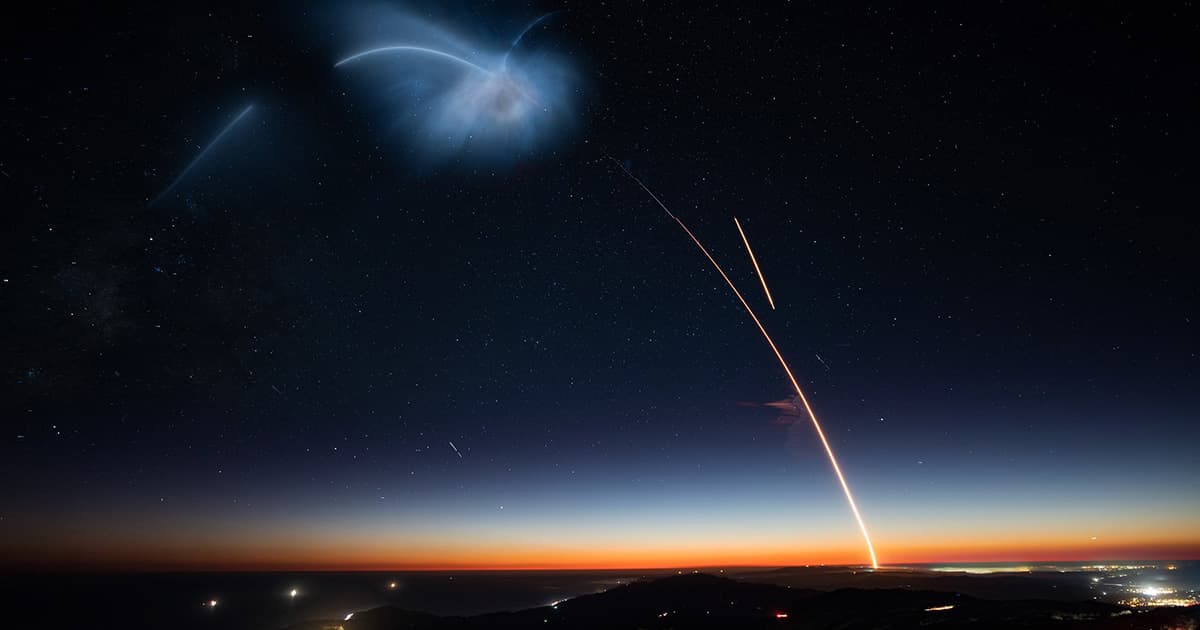 When the Falcon 9 rocket took off from NASA's Kennedy Space Center in Florida at around 8 pm Eastern time, about half an hour after sunset, onlookers were treated to an incredible sight: a hazy, jellyfish-like "nebula" caused by the rocket burning its propellant during its ascent into space.

One image shared by Supercluster photojournalist Erik Kuna shows off the unique lightshow in spectacular fashion:

Our photographer @erikkuna captured what's been dubbed a 'nebula' as the @inspiration4x Dragon separates from its Falcon 9 rocket.#Inspiration4 pic.twitter.com/AEzUC8jPVl

While it isn't technically a planetary nebula, the phenomenon sure resembles the hot, exploding shell of superheated gas, released by a dying star.

But the effect is actually produced by the rocket's chemicals reacting with the air particles around them. Some of the rocket exhausts freeze and form clouds, while the remaining rays of the Sun, still illuminating regions above the Earth's surface shortly after nightfall, interact with those particles and refract through them, reproducing spectacular ranges of color, according to Quartz.

The effect is triggered following stage separation, when the Falcon 9 rocket's two stages come apart to either keep propelling the Crew Dragon spacecraft into space or plummet back down to Earth to be reused later.

It also involved a little bit of camera trickery. To end up with a picture like Kuna's requires a bit of a balancing act of an incredibly high ISO (light sensitivity of the camera sensor) and a long shutter speed, as Space.com reported last year.

The result: a fantastic firework of colors that resembles galactic structures on a much smaller scale.

But there is a darker side to the phenomenon: rockets appear to emit shocking amounts of greenhouse gasses during every launch — a steep environmental price to pay for a select few to spend three days circling the Earth.

More on the launch: The View From Inspiration4's Toilet Is Absolutely Incredible