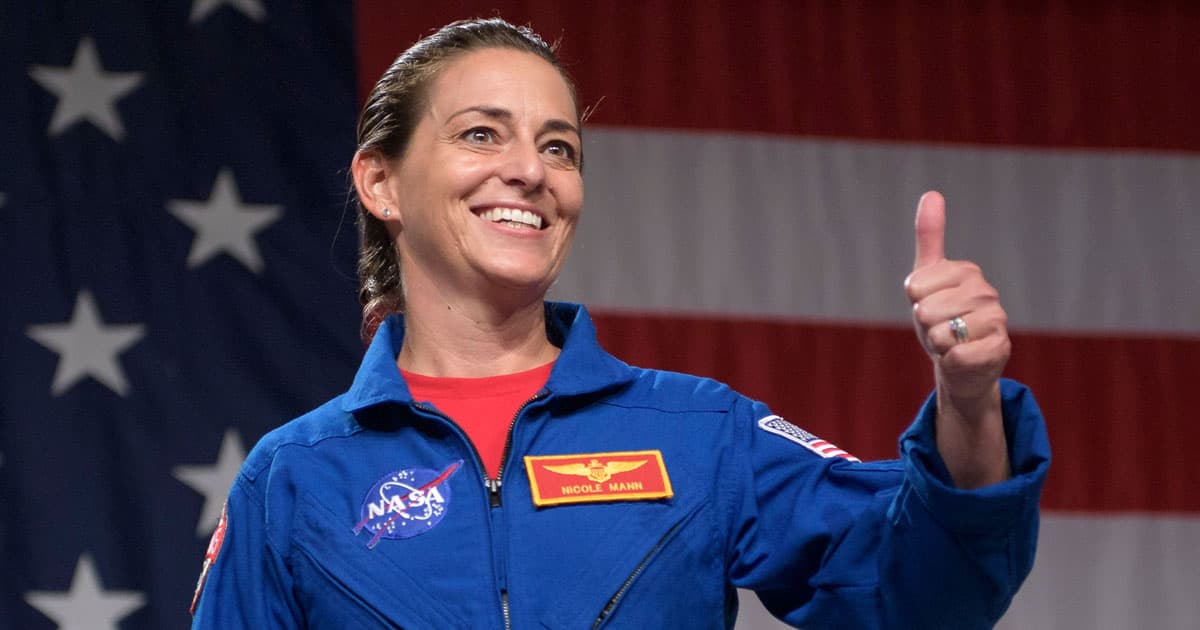 Big round of applause for Nicole Aunapu Mann, a member of the Wailacki nation!

Big round of applause for Nicole Aunapu Mann, a member of the Wailacki nation!

This fall, astronaut Nicole Aunapu Mann, a naval aviator and mechanical engineer, is set to fly to the International Space Station as a member of NASA's upcoming SpaceX Crew-5 mission — and in doing so, as Universe Today reports, she'll become the first ever indigenous woman in space.

Mann, who hails from Petaluma, California, is a member of the Wailacki nation, one of the Round Valley Indian Tribes native to Northern California. A marine with a venerable military career, she's served tours in Iraq and Afghanistan and has logged more than 2,500 hours of flight time in 25 different types of aircrafts, according to Universe Today.

"It's very exciting," Mann told Indian Country Today. "I think it's important that we communicate this to our community, so that other Native kids, if they thought maybe that this was not a possibility or to realize that some of those barriers that used to be there are really starting to get broken down."

This is an achievement worth highlighting. NASA has a long history of exclusion — something that the agency has had to grapple with in recent years. And while NASA shouldn't get any untoward credit for righting wrongs that are long overdue, we should absolutely celebrate the change-makers like Mann who are bravely breaking decades-old barriers.

Mann's space exploration aspirations don't stop with Crew-5. She's one of the 18 astronauts who was selected to train for the Artemis Moon landings, which means that Mann — if ultimately chosen from this elite group of 18 — could someday be the first woman to step foot on the Moon.

"It's just this really overwhelming sense of emotion," Mann told Inverse back in 2021, discussing the opportunity to potentially be chosen for the Moon landings, "in the best of ways that I can describe."

Moon Wrestling
The Head of NASA Is Scared Chinese Astronauts Will Seize Portions of the Moon
Jan 3
Read More
Shot Well
Head of NASA Relieved to Hear Elon Musk Isn't REALLY Running SpaceX
12. 12. 22
Read More
Little Boxes
One Silly Little Detail Is Reportedly Delaying Artemis II by Years
12. 8. 22
Read More
+Social+Newsletter
TopicsAbout UsContact Us
Copyright ©, Camden Media Inc All Rights Reserved. See our User Agreement, Privacy Policy and Data Use Policy. The material on this site may not be reproduced, distributed, transmitted, cached or otherwise used, except with prior written permission of Futurism. Articles may contain affiliate links which enable us to share in the revenue of any purchases made.
Fonts by Typekit and Monotype.