How NASA Got Price Gouged on the SLS, According to Its Former Second-in-Command

"I think it is just not sustainable." 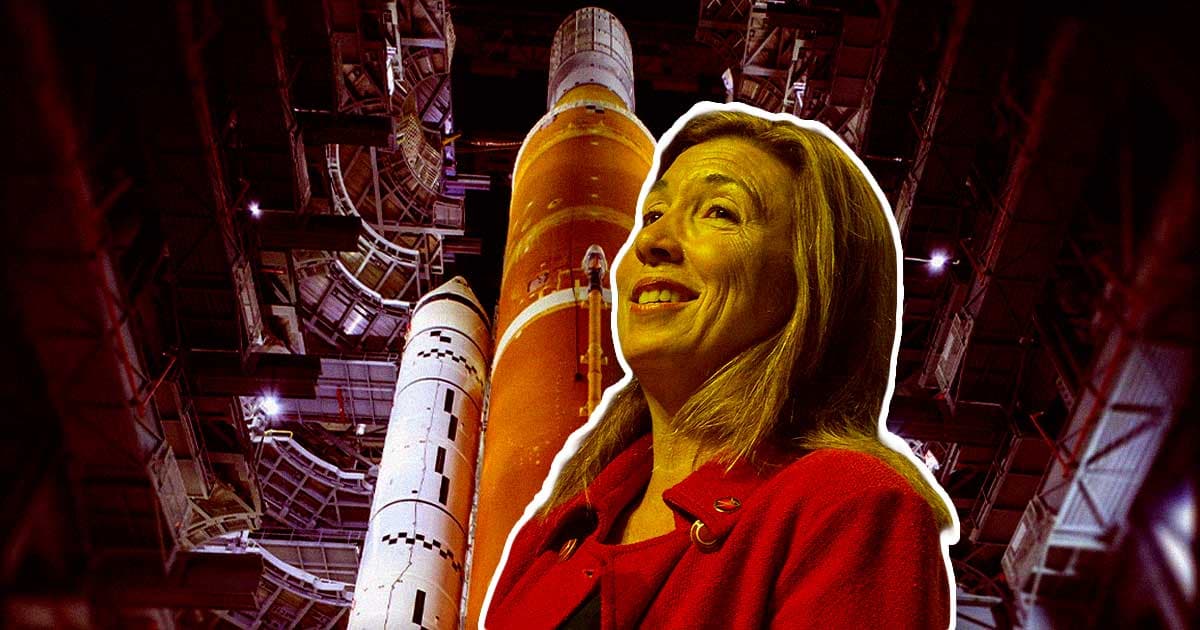 It may come as a shock now, but during the salad days of Barack Obama's first term, lots of people in the US government believed that we could get back to the Moon without the help of billionaires.

That's how we ended up with the Space Launch System, an enormous and staggeringly expensive rocket that's poised to return human beings to the Moon for the first time since the early 1970s as part of NASA's Artemis missions.

The project isn't without its critics, though, especially as SpaceX prepares to test its interplanetary Starship, a reusable rocket that outclasses the SLS in many respects. In her new book "Escaping Gravity," former NASA deputy administrator Lori Garver dishes on the controversial project — as well as the book's themes of sexism in the industry, her relationship with old coworkers, and much more.

Futurism: What do you think people often get wrong about NASA or about working at NASA?

Lori Garver: I think people presume that NASA has more of a change between administrations. This is a really common criticism, "oh, you're just off on one thing and the reason we haven't made progress is because a new president came in and changed it."

As I say in the book, new presidents come in. And of course, in a democracy, NASA's getting government funding. Some of the people within NASA do, surprisingly, not feel like they're part of the administration. They're used to lobbying those members of Congress who have traditionally supported their programs, though that's not actually an ethical thing for government employees to do.

Presidents, when they come in with their transitions, typically are just looking to see the status of everything. And programs that they uncover, that are doing well and are on track and on budget — they never were gonna change those.

So, the elephant in the room is NASA Administrator Bill Nelson, and you really pulled no punches —

That's not true, I pulled plenty of punches! [Laughs] There's nothing personal in there.

Have you gotten any backlash?

I have not. I was recently at a very broadly attended, I think there were 1500 of us, industry space NASA event. We go to a baseball game every year and get a block of tickets, and we call it space ball. So I went, knowing this is the first once since the book came out.

Senior NASA people were there, but Senator Nelson was not — he tested positive for COVID the day before. The number three NASA person was there, who I know. I talked to many NASA people. And the overwhelming reaction was very positive to the book. I got so many women saying "this is really meaningful to me," and many in the Space Force and the military side of space saying, "this is really important, because this is happening on our side, too."

It was unbelievable. I am well aware that there were lots of people there that didn't come up to me, who would have had something negative to say.

I was going into it just recognizing that this is controversial, but I think that's the point. These are policy discussions that we need to have. And the people who are still supporting the Space Launch System, the things that Senator Nelson put in place a dozen years ago — they're not bad people. They were just given programs that are not sustainable to work on. And I know they're proud of the progress and they want to see it launch successfully.

You mentioned the SLS here and in your book as something that's not sustainable. Candidly, do you think it presents a serious opportunity for space exploration, or is it just too expensive, and by the time it gets off the ground, it will be obsolete?

The opportunity it would have provided, if it had been, as advertised, launched by 2017 and for less than half the price it is now, would have been different. Again, I wasn't very confident that would happen. But even if you believe the people who were selling us that program did believe they could match it and have the recurring launch costs be $500 million — that is entirely different than than what we have today.

So even though I didn't want it to go forward, it had some potential. They added, what, seven years and over $10 billion dollars — $20 billion if you add Orion — just makes it so untenable that I don't think the public is going to find it to be something that is equal, much less beyond, what we did 50 years ago.

You said a number of times that it the SLS was "sold" to NASA. Can  you speak a little bit to that? Who was doing the selling and do you think they were aware it that was unrealistic?

At one point, Brewster Shaw, a Boeing executive and former astronaut, stood in my office — I don't name him in the book, but people have asked — and he told me that Boeing could do SLS for $6 billion in five years. And I laughed, and he did not think was funny.

He had a bad back at the time, so he was standing, and I was standing also, otherwise he'd be lording over me. And I said, "you cannot believe that. I don't think you believe that." And you have to know Brewster, he's a very serious, always serious person. And he just really wouldn't budge.

NASA looked at that $6 billion figure and said well, we think maybe $8 billion, let's give it a cushion. And then the Hill gave it a push and made it $10 billion. This thing is now, what, $22 billion or something?

So did Shaw know? That's a good question. Someone ought to ask him.

At the time I left NASA in 2013, I said "I think SLS is going to slip a year or two." NASA came back and said, "she's wrong, it's not slipping." And the head of SLS for Boeing said "it's ahead of schedule, across the board." They were still saying then that it would launch in 2017.

So were they lying? Did they think they could really do that?

Do you think that the future of spaceflight lies with private companies like SpaceX or Blue Origin, if not with SLS?

Well, spaceflight is a broad term. Space launch, that was what my focus was — because lowering the cost to orbit had been the goal for so long, and we had not accomplished this goal. I knew that the government's incentives, the way we were doing things, wasn't going to lower costs, innovate, or expand markets.

I try not to be too critical, even of the spaceflight industry, because they owe value to their shareholders, and they had these contracts, they wanted to keep them. But that's why it's the government's responsibility to step up and establish policies that do incentivize the right behavior.

So spaceflight per se, going to the Moon, going to Mars — I'm not sure about the broader market and when those costs will come down. NASA is obviously in a hybrid system now where they're contracting in some ways, in a fixed price situation, where I don't think this would be too successful if we didn't have the billionaires willing to invest some money, because they happen to have visions that align with these programs.

I think the rest of the industry is trying to figure out how they can make that system work in their world. And I'm frankly not sure how to exactly do that. But the spaceflight industry, and lots of what NASA does, is in my view not ripe for commercialization.

Switching gears, I want to ask something you may have been asked a bunch of times before: do you think NASA is a sexist institution?

No, I do not. I think historically, we have been, and I think we can do more to advance equity, diversity, and inclusion.

I think inherently there are now just so many more female leaders. I even believe government in general has done a much better job maybe than the private sector. Part of the reason is, you know, because we've had these laws, but you also have to have the intention.

We have to ask every space person this, but: do you believe in extraterrestrial life or have you seen evidence of it?

Personally, I think it's harder to imagine that we are the only life in the universe, so that certainly puts me in the category of believing there is extraterrestrial life. What that consists of, how far it has evolved, is certainly unknown to me.

NASA has programs more focused on things like finding microbial life or the conditions that could suit the kind of life we know about. I was always in favor of this Search for Extraterrestrial Intelligence program as a very small dollar amount. The search for extraterrestrial intelligent life is something that I think the public — who pays for NASA — has an interest in. These programs are not expensive, because we aren't physically, you know, sending humans to do that.

I think there are only a couple of things that can really take us the next step on this planet. You know, we went to space, and when we look back, a big theme of my book is that we learned we're in this together. The way to really hammer that home is to learn there are others, other life forms, out there that undoubtedly would not look like us. Sorry, Gene Roddenberry.

We do have more in common than we have differences, and I think we would do well to know that and to recognize that.

Read This Next
Putting Things In Perspective
Amazing Artemis Photo Shows Every Human, Alive or Dead, Plus the Moon
Fighting Words
Retired NASA Astronaut Scott Kelly Dishes on Ukraine, Russia, and Moon Mission
Psychological Warfare
Experts Excoriate NASA Report Claiming James Webb Wasn't Homophobic
Big Impact
Meteorite Hit Mars So Hard NASA Thought It Was a Quake
Overview Effect
William Shatner Says His Space Trip Left Him With a Feeling of Terrible Grief
More on Off World
International Sti...
3:44 PM on the byte
New Details Emerge About the "Peculiar Odor" on International Space Station
Wrong Rocket
Yesterday on the byte
Space Tourism Company's Website Accidentally Shows Photo of Rocket Exploding
SpaceX Spies
Yesterday on the byte
SpaceX Unveils Military Satellite Called Starshield
READ MORE STORIES ABOUT / Off World
Keep up.
Subscribe to our daily newsletter to keep in touch with the subjects shaping our future.
+Social+Newsletter
TopicsAbout UsContact Us
Copyright ©, Camden Media Inc All Rights Reserved. See our User Agreement, Privacy Policy and Data Use Policy. The material on this site may not be reproduced, distributed, transmitted, cached or otherwise used, except with prior written permission of Futurism. Articles may contain affiliate links which enable us to share in the revenue of any purchases made.
Fonts by Typekit and Monotype.