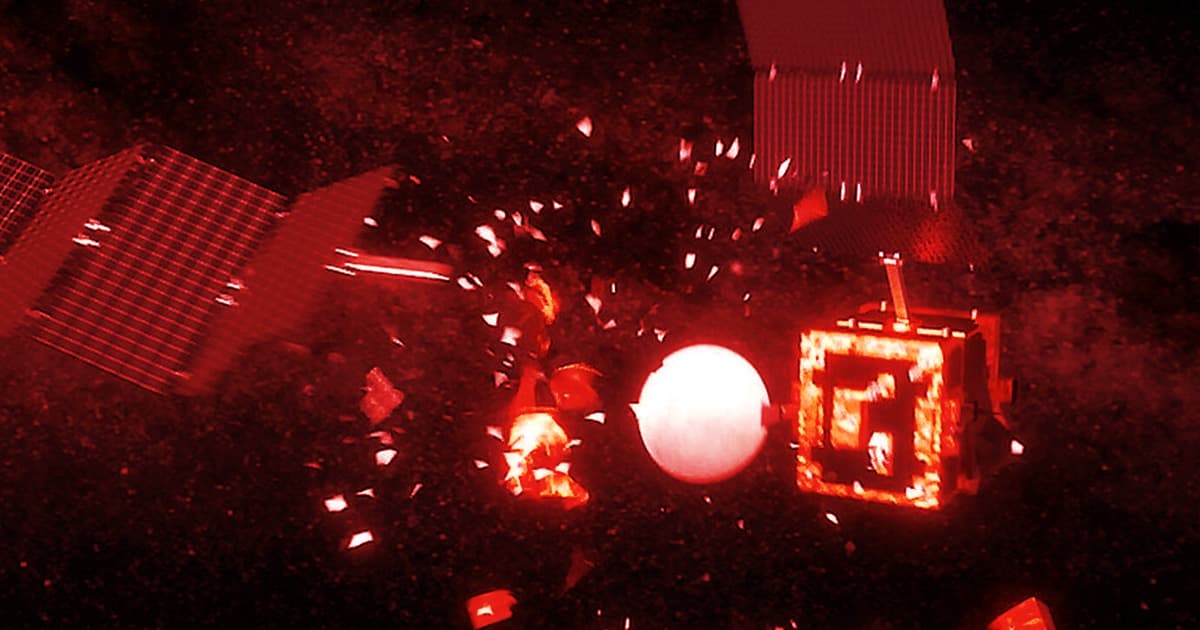 Is this the inevitable conclusion of our growing space junk problem?

Is this the inevitable conclusion of our growing space junk problem?

A Chinese military satellite appears to have gotten smashed by a disintegrating Russian rocket, Space.com reports, in what's likely the worst orbital collision since 2009.

The collision illustrates the growing danger of derelict spacecraft parts and other jetsam in Earth's orbit, where they can smash functional equipment — as well as the extraordinary difficulty in figuring out what's going on in Earth's orbit.

According to an investigation by Harvard astrophysicist and satellite tracker Jonathan McDowell, Chinese satellite Yunhai 1-02 likely crashed into a piece of space junk earlier this year.

The piece, according to McDowell, was part of a Zenit-2 rocket that launched a spy satellite back in 1996. According to a database entry located by McDowell, the rocket part was tagged with an unusual entry: "Collided with satellite."

"This is a new kind of comment entry — haven't seen such a comment for any other satellites before," McDowell wrote.

The evidence remains circumstantial, but McDowell found that the two objects had been in close proximity earlier this year.

Surprisingly, the Yunhai satellite seems to have survived the collision and is still transmitting radio signals, according to Space.com.

The more stuff we send into orbit, the more likely similar collisions become.

"Collisions are proportional to the square of the number of things in orbit," McDowell told Space.com. "That is to say, if you have 10 times as many satellites, you're going to get 100 times as many collisions. So, as the traffic density goes up, collisions are going to go from being a minor constituent of the space junk problem to being the major constituent. That's just math."

In the worst case scenario, one collision could trigger a knock-on effect causing an exponential series of collisions, a phenomenon known as "Kessler syndrome."

But for now, all we can do is hope that it will never come to that.

Duck and Roll
Russia Forced to Dodge Space Debris From When It Blew Up Satellite
Jun 17
Read More
Dodged
SpaceX's Spacecraft Just Had a Near Collision With an Unidentified Object
4. 23. 21
Read More
1-800 Space Junk
Space Debris Trackers Warn of "Explosions in Orbit"
10. 13. 20
Read More
+Social+Newsletter
TopicsAbout UsContact Us
Copyright ©, Camden Media Inc All Rights Reserved. See our User Agreement, Privacy Policy and Data Use Policy. The material on this site may not be reproduced, distributed, transmitted, cached or otherwise used, except with prior written permission of Futurism. Fonts by Typekit and Monotype.