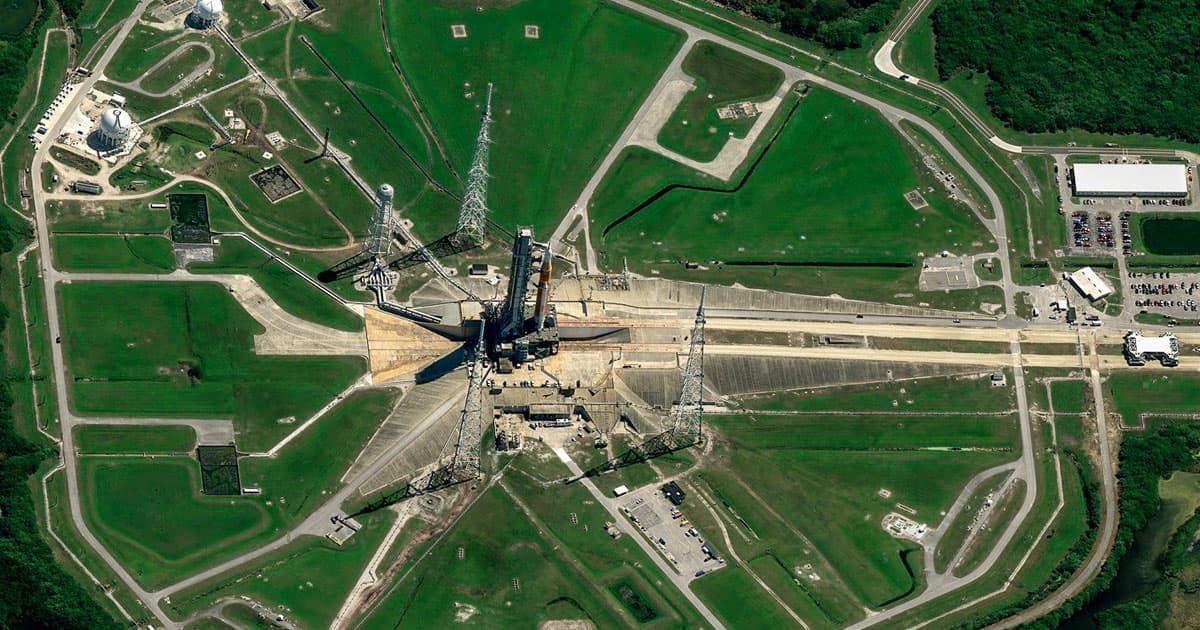 This is what the astronauts are going to ride back to the Moon.

This is what the astronauts are going to ride back to the Moon.

When you look into the void, the void looks back.

At least, that seems to be the case for NASA's Moon-bound Space Launch System (SLS) megarocket, as it moved to the launch pad at Kennedy Space Center last week to prepare for testing. As spotted by Space.com, a satellite snapped images of the SLS all the way from orbit, illustrating just how gargantuan it really is.

Airbus' Pléiades Neo satellite happened to get some shots of the SLS and the Orion spacecraft that tops it as NASA prepares to test for the forthcoming Artemis 1 lunar mission, and they are absolutely incredible. Airbus also had a hand in building the SLS, so the company is inspecting its own handiwork.

The #Artemis I launch is getting closer 😃
We just captured the SLS rocket 🚀 on its launch pad with our #PléiadesNeo 🛰 hi-res satellite.
We can't wait to see the Orion spacecraft propelled by European-built service module in space! pic.twitter.com/c6Zdo8gIJ0

Though NASA's first lunar mission since the early 1970's isn't expected to head to the Moon until May at earliest, the SLS and Orion capsule are already out on Kennedy's launch pad to test the uber-expensive megarocket.

In another post, Space.com pointed out that it took a whopping 11 hours to get the SLS from the Vehicle Assembly Building (VAB) to the launch pad via a 6.5 million pound "crawler" transporter, and the VAB itself was said to have the largest doors in existence so that the rocket, which measures 212 feet tall and more than 27 feet wide, could exit.

We have left the building! With the integrated SLS and Orion system atop it, the crawler-transporter has begun the approximately 4-mile journey from the VAB to the launch pad. Stay up to date on the roll through our @NASA #Artemis blog HERE >> https://t.co/f2x8yQ4ADq pic.twitter.com/wrGJLj60d6

Because the SLS is billions of dollars over budget and took a decade to build, seeing it not only finished but getting ready for launch is extremely exciting. It's still going to be wildly expensive to operate, but hey, at least it's finally finished!

More on the SLS: NASA Descends Into Chaos as Moon Program Revealed to Be Way Behind, Over Budget