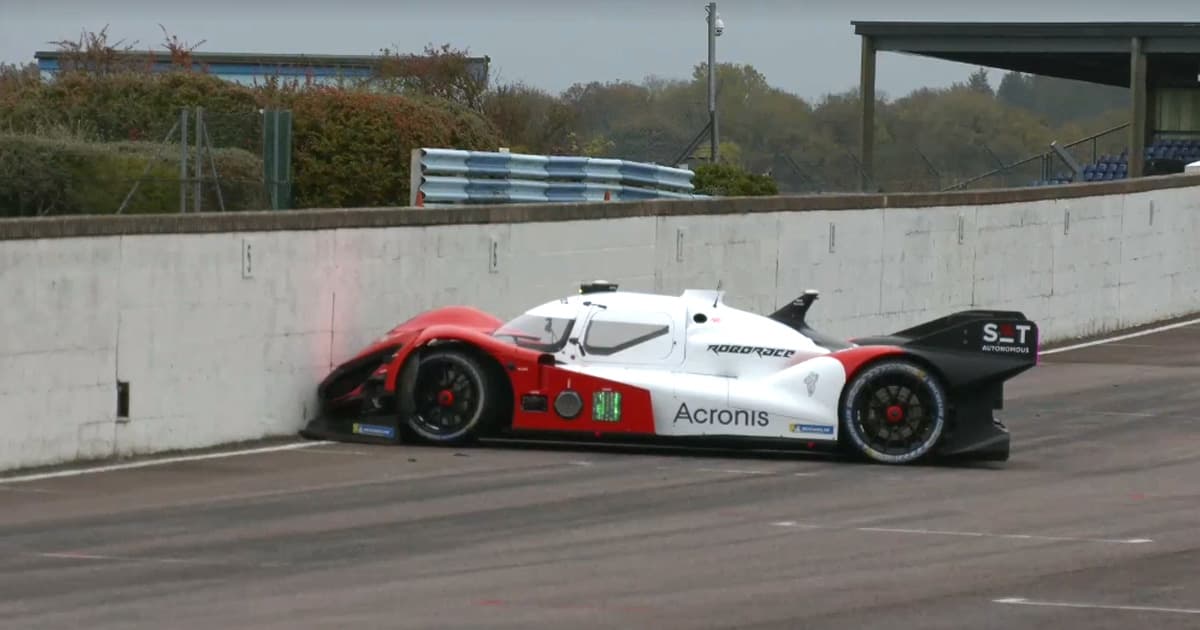 It didn't even get to the starting line.

It didn't even get to the starting line.

A self-driving racecar had a terrible start during the first-ever live broadcast of Roborace, a competition in which autonomous electric racecars go head to head As soon as it started its lap, it abruptly turned right and smashed headfirst into a concrete wall, Car and Driver reports.

The car, programmed by team Acronis SIT Autonomous from Switzerland, literally didn't even make it across the starting line.

"That is not the start we wanted to see, guys," one of the commentators could be heard saying. "I'm kind of speechless after that," his partner said.

The event that involved the more-than-unfortunate premature collision was what Roborace is calling Season Beta, involving six teams competing in a time-trial race. Each car is physically the same, but the software it runs will vary from team to team.

It's not just autonomous vehicles driving around an IRL course — Roborace has put mixed-reality obstacles on the race track that teams have to avoid or lose points.  The race even includes game-like virtual collectibles.

It is, however, up to the teams to decide whether to crash through virtual barriers to get a better time and soak up the penalty, or swerve around them and lose time.

Acronis SIT Autonomous' car took some costly damage to the front of the vehicle, but luckily nobody was hurt — beyond some bruised egos.

It's still unclear what the cause was for the SNAFU.

More on Roborace: Self-Driving Racecars Are Edging Up Toward Human Records [LOL]

Autonomous Donuts
Watch a Self-Driving Car Careen Around Corners Like a Racecar
3. 28. 19
Read More
Project Titan
Apple Lays Off 200 Workers From Secretive Self-Driving Car Project
1. 25. 19
Read More
Battle of the Bots
U.S. Grocer Kroger Has Begun Making Autonomous Deliveries
12. 18. 18
Read More
+Social+Newsletter
TopicsAbout UsContact Us
Copyright ©, Camden Media Inc All Rights Reserved. See our User Agreement, Privacy Policy and Data Use Policy. The material on this site may not be reproduced, distributed, transmitted, cached or otherwise used, except with prior written permission of Futurism. Fonts by Typekit and Monotype.