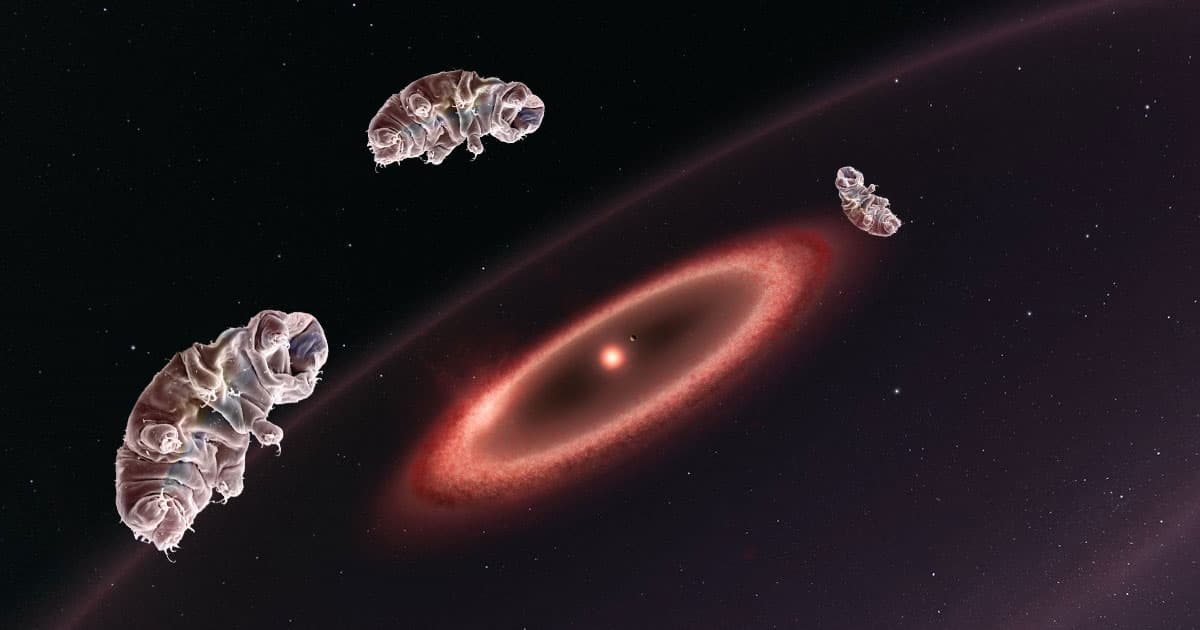 Is that really ethical?

Is that really ethical?

It's not really a surprise that smaller creatures are better able to survive the harsh conditions of space travel, but knowing the first interstellar travelers may be microscopic organisms sure does bring up a ton of ethical questions.

In a new university press release, UC Santa Barbara professors Philip Lubin and Joel Rothman said this week that it may be possible to send small roundworms or even tardigrades — affectionately known as "water bears" — to nearby star systems on small, wafer-sized spacecraft.

"I think it's our destiny to keep exploring," Rothman said. "Look at the history of the human species. We explore at smaller and smaller levels down to subatomic levels and we also explore at increasingly larger scales. Such drive toward ceaseless exploration lies at the core of who we are as a species."

Tardigrades in particular may make great candidates because of their near-indestructibility: the microscopic creatures can suspend metabolic function to survive extreme cold, the vacuum of space, and even being shot out of a gun in one memorable experiment.

There are a few problems with shipping water bears to the stars, though. First of all, even tardigrades aren't perfectly immortal. It's not even entirely clear how long they can survive in space — and in the decades or even centuries it would take to reach another planet, that's a very important question.

In addition, there's the ethical question of whether humans have the right to introduce life to new places, which the UC Santa Barbara researchers concede.

"There are the ethics," Lubin said in the release. "I think if you started talking about directed propagation of life, which is sometimes called panspermia — this idea that life came from elsewhere and ended up on the earth by comets and other debris, or even intentionally from another civilization — the idea that we would purposefully send out life does bring up big questions."

And that's without getting into the wellbeing of the tardigrades themselves. It may sound silly to worry over whether such a small animal can think or feel, but before we launch them into orbit it's at least worth wondering about.

So Long
Tragedy! NASA Says the Voyager Space Probes are Powering Down
6. 16. 22
Read More
Lunar Learning
Scientists Grow Living Plants in Moon Soil Captured by Astronauts
5. 12. 22
Read More
Making Mars
NASA's Chief Scientist Quits, Says He Has a Plan to Terraform Mars
1. 3. 22
Read More
+Social+Newsletter
TopicsAbout UsContact Us
Copyright ©, Camden Media Inc All Rights Reserved. See our User Agreement, Privacy Policy and Data Use Policy. The material on this site may not be reproduced, distributed, transmitted, cached or otherwise used, except with prior written permission of Futurism. Articles may contain affiliate links which enable us to share in the revenue of any purchases made.
Fonts by Typekit and Monotype.