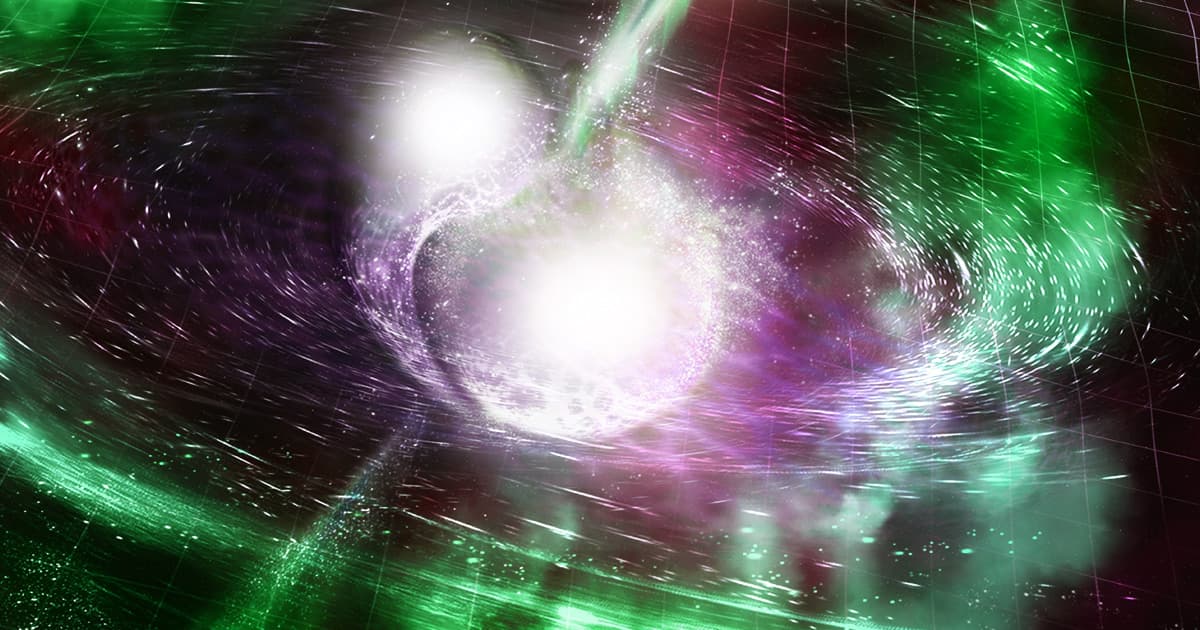 LIGO picked up gravitational waves from a brutal crash.

LIGO picked up gravitational waves from a brutal crash.

Astronomers at the LIGO observatory have — for the second time ever — detected the cosmic ripples given off by a brutal collision between two distant neutron stars.

LIGO scientists actually picked up the gravitational waves given off by the merger back in April, but weren't able to confirm their source until recently, according to a press release. The merger is unusual in that the mass of the two neutron stars is way higher than expected — potentially giving astronomers new clues in the mystery of how these stars form and change over time.

Based on LIGO's data, which has been submitted but not yet accepted in The Astrophysical Journal and presented at a meeting of the American Astronomical Society earlier this month, the distant binary neutron star system has a significantly higher mass than any pair found in our galaxy.

In order to make sense of it, researchers will likely need to come up with brand new models that explain the unusually-heavy pairing.

"From conventional observations with light, we already knew of 17 binary neutron star systems in our own galaxy and we have estimated the masses of these stars," LIGO and University of Oregon researcher Ben Farr said in the release. "What's surprising is that the combined mass of this binary is much higher than what was expected."

READ MORE: Gravitational Waves Surge Through the Fabric of Space and Time After Neutron Stars Violently Collide [LIGO via SciTechDaily]

More on neutron stars: Stare Into the Brutal Maw of This Barbarous Neutron Star

Space Lumps
Scientists Say We May Be Extremely Wrong About the Universe
Apr 28
Read More
Into Darkness
Inside NASA's Bold Proposal to Probe the Mysteries of Dark Matter
Mar 11
Read More
Ayy Lmao
Scientists Puzzled by "Spooky" Object Sending Radio Signals Every 18 Minutes From Deep Space
Jan 27
Read More
+Social+Newsletter
TopicsAbout UsContact Us
Copyright ©, Camden Media Inc All Rights Reserved. See our User Agreement, Privacy Policy and Data Use Policy. The material on this site may not be reproduced, distributed, transmitted, cached or otherwise used, except with prior written permission of Futurism. Articles may contain affiliate links which enable us to share in the revenue of any purchases made.
Fonts by Typekit and Monotype.