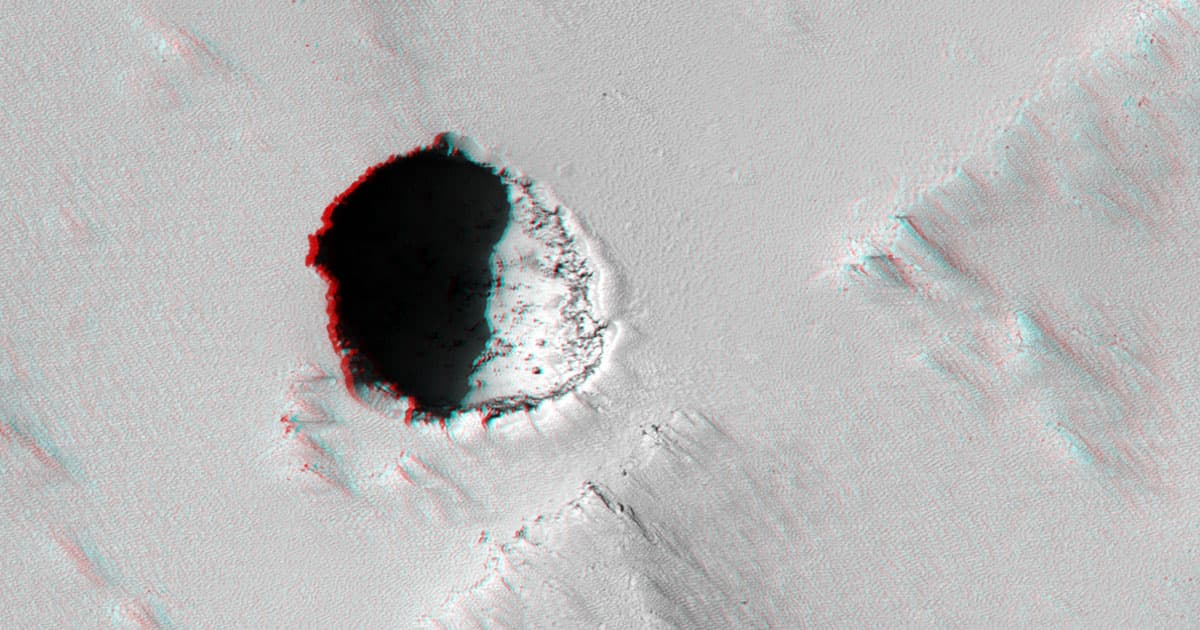 Scientists Searching Mars for Good Caves for Astronauts to Live In

These nine grottos are among some of the hottest Martian real estate.

These nine grottos are among some of the hottest Martian real estate.

In a presentation earlier this month, a team of researchers from The Geological Society of America (GSA)identified nine of what they believe to be the most livable caves on the surface of Mars — spaces large enough that they could give future explorers much-needed protection from the harsh environment of the planet's surface, The New York Times reports.

The Red Planet is a hostile place: temperatures can drop to below negative 148 degrees Fahrenheit, the atmosphere is incredibly thin, and there's no ozone layer, which means solar radiation is extreme as well. And that's not to mention the very real risk of getting hit by a massive meteorite.

In short, the best place to survive is very likely underground.

The researchers narrowed down their list of hot Martian real estate by starting with the Mars Global Cave Candidate Catalog, a massive collection of over 1,000 caves identified by NASA's Mars Odyssey and Mars Reconnaissance Orbiter, which could potentially house human astronauts.

They whittled the list down to the best options by finding those within 60 miles of a potential landing site, and below around 3,300 feet of elevation, which could give descent vehicles more time as they experience their "seven minutes of terror" during their journey down to the surface.

"Mars has just enough atmosphere that you can’t discount it, but not enough to actually give you a significant amount of aerobraking," Nicole Bardabelias, a geoscientist at the University of Arizona, who presented the researchers' findings, told the NYT, adding that you need "enough space between when you hit the top of the atmosphere and where you’re supposed to land."

The scientists ended up with 139 candidates that met their criteria, which they then analyzed to make sure they extended underground.

The largest of the nine leading candidates has an opening as big as an entire football field, a tantalizing prospect for future space travelers.

For now, NASA's rovers are unfortunately nowhere near any of these candidates, which means we won't be able to have a surface-level look for quite some time.

But that hasn't stopped us from wondering what future dwellings on the Red Planet could one day look like.

More on Mars: Researchers Say "Conan the Bacterium" Could Be Hidden Beneath Mars’ Surface