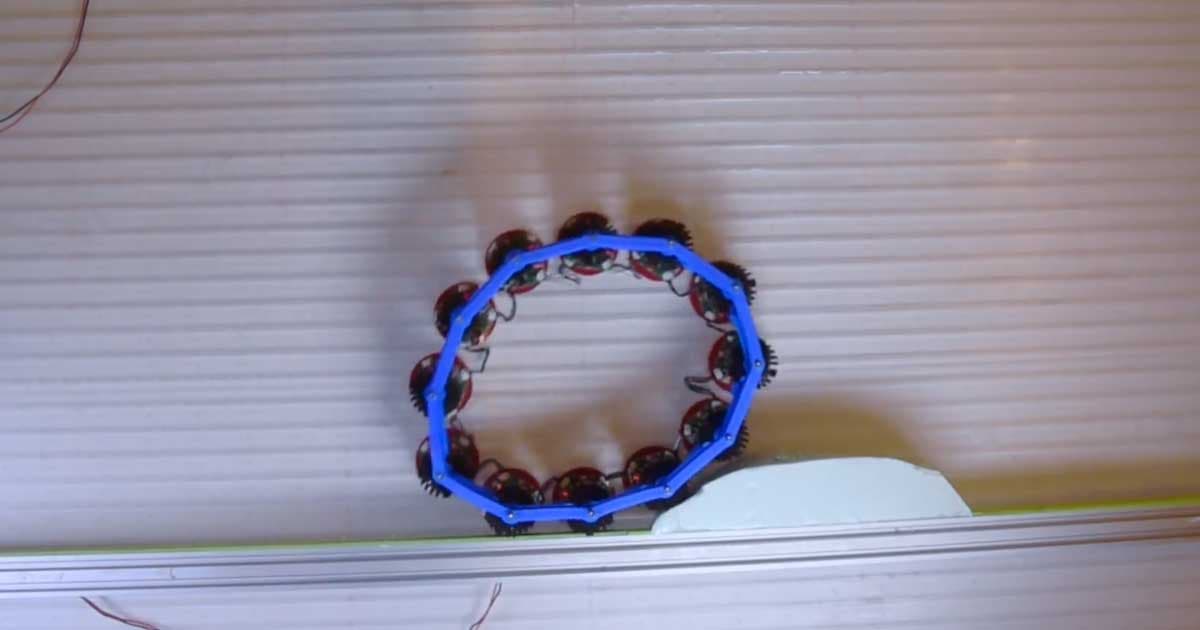 It's runnin' up that hill.

It's runnin' up that hill.

An international team of researchers have created a wriggly "odd wheel" robot that can spontaneously roll up an incline, a playful and seemingly gravity-defying take on biology-inspired mechanics.

The invention isn't, however, actually breaking any laws of physics. The fine-tuned oscillations of each of its individual segments allow it to push itself against the ground and even conquer obstacles as it makes its away up a hill, as detailed in a new preprint spotted by Quanta Magazine — so while admittedly very clever, it's not a perpetual motion machine.

The wheel's trick is counterintuitive. It's made up of individual motors that are linked together to form it's round structure, with each module connected to rubber band-loaded plastic arms that are arranged in such a way to generate opposite torque — an unstable "nonreciprocal" arrangement that normally wouldn't allow the wheel to move at all.

Yet the push and pull of the individual motors generate circular oscillations that cause the wheel to stretch and expand in a way that allows it to roll uphill. Physics: still undefeated!

It's not entirely unlike what happens in nature.

"Animals are lots of interconnected oscillatory components that have to work together," Nick Gravish, a roboticist at the University of California, San Diego, who was not involved in the research, told Quanta.

But it's still unclear if biology is actually already taking advantage of these kind of processes. It is, however, a potentially exciting new avenue to learn more about the natural environment, including the movement of leaderless swarms of animals.

While playful, the technology isn't exactly going to replace the wheel any time soon.

"If you tried to make a plane using beating wings, you would still be walking or swimming from Normandy to New York," Denis Bartolo, a physicist at the École Normale Supérieure in Lyon, also not involved in the research, told Quanta.

Force of Nature
"Biobots" Will Serve Alongside South Korean Soldiers by 2024
5. 13. 19
Read More
Watch These Animal-Inspired Robots Find Their Footing
5. 22. 18
Read More
Octopus-Inspired Robotic Grippers Receive Huge Funding Boost
12. 18. 15
Read More
+Social+Newsletter
TopicsAbout UsContact Us
Copyright ©, Camden Media Inc All Rights Reserved. See our User Agreement, Privacy Policy and Data Use Policy. The material on this site may not be reproduced, distributed, transmitted, cached or otherwise used, except with prior written permission of Futurism. Fonts by Typekit and Monotype.