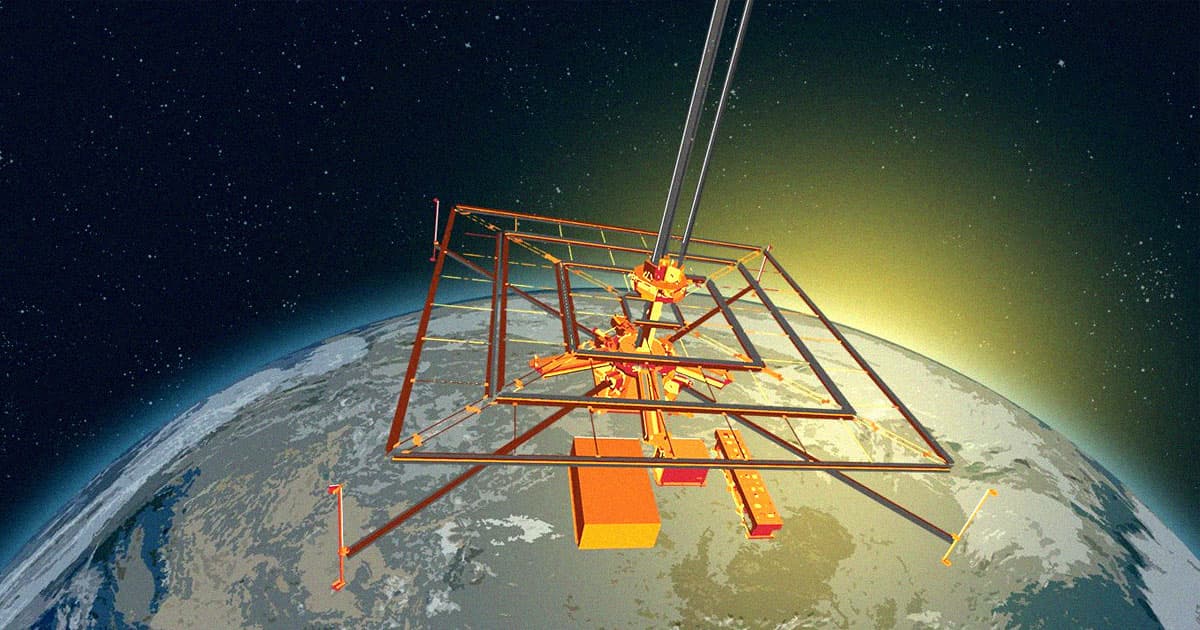 "No matter what happens, this prototype is a major step forward."

"No matter what happens, this prototype is a major step forward."

On Earth, solar power is at the mercy of clouds and nighttime. But in space, the thinking goes, you could have virtually unmitigated access to direct sunlight.

Of course, the cost and efficiency of getting that hardware into orbit remains an unknown, in addition to the nearly insurmountable feat of getting that energy down to Earth.

That's why it's so intriguing that researchers from the California Institute of Technology have actually sent a space-based solar power array into space aboard SpaceX's latest Falcon 9 launch, with the goal of testing the feasibility of the concept.

"No matter what happens, this prototype is a major step forward," said project codirector and Caltech professor of electrical and medical engineering Ali Hajimiri in a press release.

Dubbed the Space Solar Power Demonstrator (SSPD), the orbital solar array weighs a hefty 110 pounds as scientists have jam-packed it with experimental technology. As such, the SSPD comprises three distinct experiments.

First is the Deployable on-Orbit ultraLight Composite Experiment (DOLCE), a deployable six-feet-by-six-feet structure that's intended to be a small scale test of the architecture that would form a full-sized array.

Next is probably the most exciting part: the Microwave Array for Power-transfer Low-orbit Experiment (MAPLE). As the name suggests, this experiment addresses the challenge of using wireless power transmission to send power back to Earth by testing an array of microwave power transmitter that will beam energy at two target receivers in space.

And last up is ALBA. What it stands for is mysteriously undisclosed, but we do know it's a collection of 32 different types of photovoltaic cells, the devices that collect and convert energy from sunlight. Scientists will use the test to single out the cells that best withstand the environment of space.

DOLCE is first up, planned to be deployed as soon as scientists gain access to SSPD, according to the project's other co-director Sergio Pellegrino, a professor of aeronautics and civil engineering at Caltech and a senior research scientist at NASA's Jet Propulsion Laboratory.

"We should know right away if DOLCE works," he added in the release, due to the relatively simple nature of the test and a live camera feed that will immediately confirm the results.

But MAPLE and ALBA will require extensive testing before the technology can be properly evaluated — up to six months, in ALBA's case.

In any case, the test could be a milestone in determining whether space based solar power is just a pipe dream or something worth throwing money at. We'll be watching.

More on space-based solar power: US Military Tests Satellite for Beaming Power Down to Earth

Fusion Futility
Elon Musk Slams Fusion, Says Future of Energy Is Wind and Solar
9. 9. 22
Read More
Black Phase
Materials Breakthrough Could Lead to Cheaper, Better Solar Panels
1. 22. 21
Read More
Brands We Love
Are Solar Panels Worth It for Your Home? Here's a Free Way To Find Out.
1. 16. 21
Read More
+Social+Newsletter
TopicsAbout UsContact Us
Copyright ©, Camden Media Inc All Rights Reserved. See our User Agreement, Privacy Policy and Data Use Policy. The material on this site may not be reproduced, distributed, transmitted, cached or otherwise used, except with prior written permission of Futurism. Articles may contain affiliate links which enable us to share in the revenue of any purchases made.
Fonts by Typekit and Monotype.