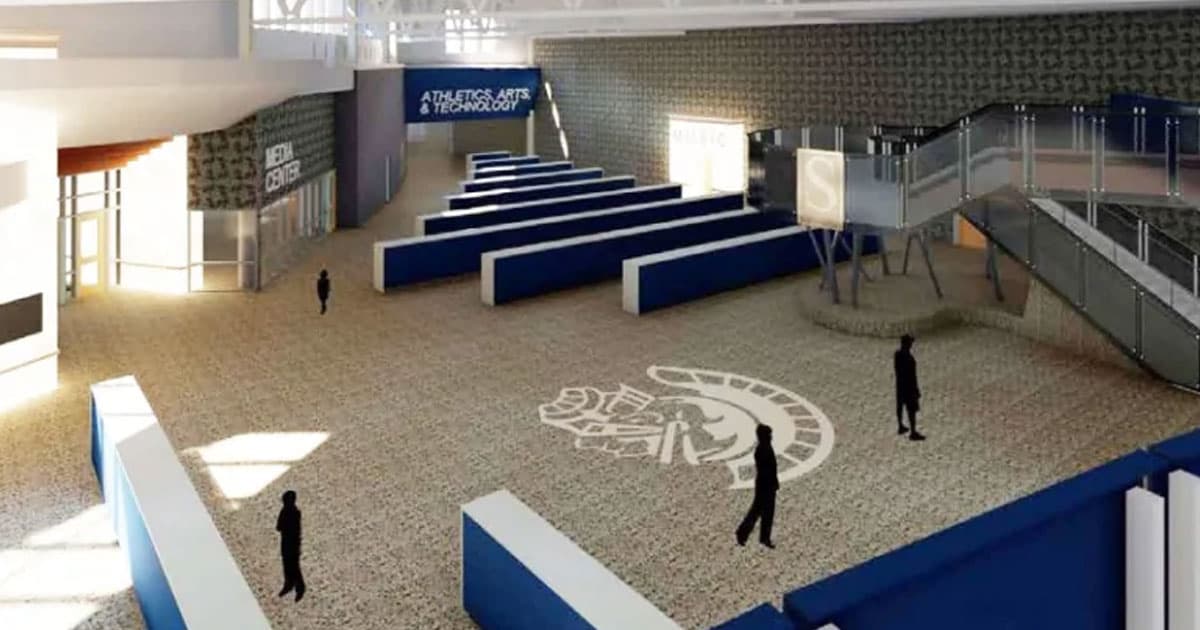 This $48M School Was Designed to Minimize Mass Shooting Deaths

It includes walls for students to hide behind and a special lockdown system.

It includes walls for students to hide behind and a special lockdown system.

A Michigan town is spending $48 million on construction updates for its high school. Typically, that might mean the addition of a state-of-the-art computer lab or perhaps a new practice field for the football team.

But this is 21st century America, so it shouldn't come as a surprise that the school is redesigning its campus not to improve students' lives, but to protect them in the event of a mass shooting.

The school's designers curved its hallways to shorten a shooter's line of sight and added seemingly countless wing walls to give students "shadow zones" where they can hide. Impact-resistant film covers the windows outside classrooms, while a special lockdown system allows officials to isolate threats with the push of a button.

In 2018, the U.S. was home to 24 death- or injury-causing school shootings — that's one nearly every two weeks — meaning it's almost a given that there will be dozens more before Fruitport even finishes its incredibly dystopian construction updates in 2021.

Of course, that could change if the U.S. takes action to prevent mass shootings — but with the lives of its children at stake, Fruitport clearly isn't waiting to find out if that's the case.

More on school shootings: Fearful Parents Are Buying Bulletproof Backpacks for Their Kids

Racial Stereotyping
Researchers: Blaming Violent Video Games for Shootings is Racist
9. 18. 19
Read More
Class Warfare
Fearful Parents Are Buying Bulletproof Backpacks for Their Kids
7. 30. 19
Read More
3D Printed Guns
A Court Just Sent a Man to Prison For 3D Printing a Gun
2. 14. 19
Read More
+Social+Newsletter
TopicsAbout UsContact Us
Copyright ©, Camden Media Inc All Rights Reserved. See our User Agreement, Privacy Policy and Data Use Policy. The material on this site may not be reproduced, distributed, transmitted, cached or otherwise used, except with prior written permission of Futurism. Articles may contain affiliate links which enable us to share in the revenue of any purchases made.
Fonts by Typekit and Monotype.