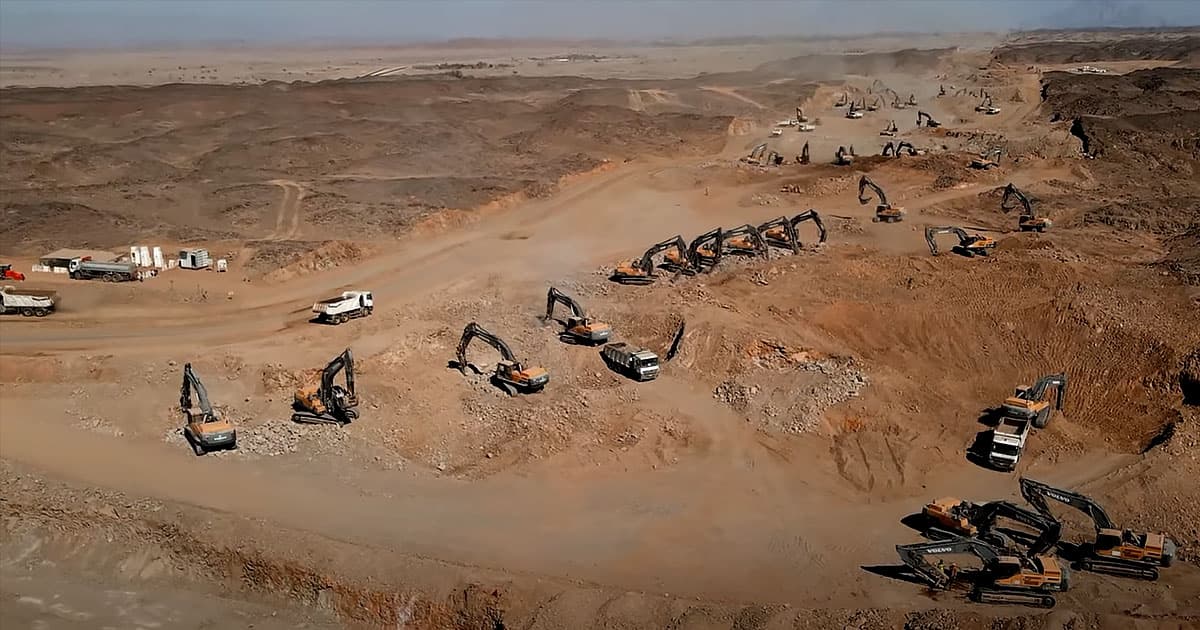 New drone footage shows that Saudi Arabia has begun excavating for its giant, 100-mile-long skyscraper development — an outlandish and highly controversial megacity in the middle of the desert.

As architecture magazine Dezeen reports, engineers broke ground on the development dubbed NEOM, which is slated to be built in a 105-mile-straight line — hence its moniker, "The Line" — and will, per the kingdom's statements at the time it was announced, be car-less and have zero emissions.

But there are far darker things going on behind the scenes, indicating that the project is already off to a rough start.

For instance, members of the Huwaitat tribe who refused to leave their homes to make way for the development have reportedly been sentenced to death by the state, human rights NGO Alqst revealed earlier this month.

According to the report, the Saudi government confirmed earlier in October that three members of the tribe were sentenced to be executed in the country's national terrorism court for refusing to leave their homes when developers came to seize their land for the megacity.

Though this sort of thing is far from new for Saudi Arabia, the fact that the country is committing human rights abuses on this level while also planning what Vice calls a "utopian fantasy" is particularly dissonant.

Beyond the glaring human rights issues at play, the project itself — which sounds a lot like a stationary version of the train from "Snowpiercer" — is, as Vice and many others have noted, pretty outlandish.

That's because, aside from being overly ambitious, the concept seems extremely strange logistically speaking, with a planned height taller than the Empire State Building, but a width of less than 700 feet.

In Saudi Arabia and in the rest of the world, progress at all costs is king — and those who are in the way of it are, it seems, expendable.

More speculative reality: Oakland Police Want to Arm Robots With Shotguns, Because We Live in a Dystopian Nightmare

Neom Thank You
Saudi Prince Plans City With Human Gene Editing, Artificial Rain
7. 26. 19
Read More
A Dangerous Cyberattack On A Petrochemical Plant Could Be The First Of Many
3. 21. 18
Read More
Saudi Arabia Just Unveiled a Futuristic "Mega City" 33 Times The Size of NYC
10. 26. 17
Read More
+Social+Newsletter
TopicsAbout UsContact Us
Copyright ©, Camden Media Inc All Rights Reserved. See our User Agreement, Privacy Policy and Data Use Policy. The material on this site may not be reproduced, distributed, transmitted, cached or otherwise used, except with prior written permission of Futurism. Articles may contain affiliate links which enable us to share in the revenue of any purchases made.
Fonts by Typekit and Monotype.