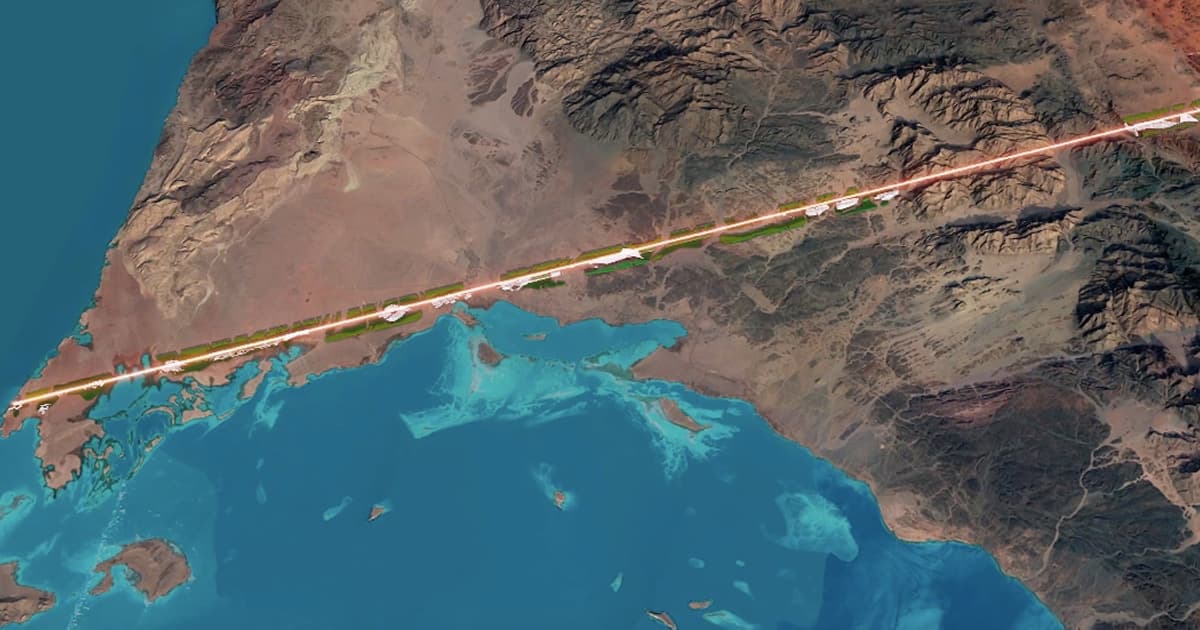 Saudi Arabia has unveiled its newest zero-carbon city project, called "The Line." As its eyebrow-raising name suggests, the unusual metropolis will be built in a straight line more than a hundred miles in length.

The unconventional city will feature "zero cars, zero streets, and zero carbon emissions," according to a statement by Saudi crown prince Mohammed bin Salman, and will be able to house one million inhabitants from around the world.

The proposed city will be the first development at NEOM, a half-trillion dollar green energy business zone in north-western Saudi Arabia that was created with the aim to end Saudi Arabia's economic reliance on oil exports, according to Reuters.

Saudi Arabia has plenty of futuristic ideas for the site as a whole, including an artificial moon, artificial rain, robot maids, as The Wall Street Journal reported in 2019 — not to mention plans for human gene-editing clinics,

Everything in The Line will be "within a five-minute walk of home," bin Salman says. It's still unclear how that's an option in a 100-mile long city, but bin Salman did note that getting from one end to the other would take just 20 minutes.

That's thanks to "The Spine," a high-tech mode of transport that connects individual city modules. This subsurface "Spine layer" takes care of "ultra high-speed transit" and "AI-enabled transport," according to official documentation.

"Throughout history, cities were built to protect their citizens," bin Salman said. "After the industrial revolution, cities prioritized machines, cars and factories over people."

Bin Salman also argued that in the world's most advanced cities, people "spend years of their lives commuting," noting that by 2050 that trend will only double. And with those harrowing commutes, more people will die of pollution.

Having everything within five minutes away will also limit deadly traffic accidents, the prince said.

The plans were met with plenty of skepticism online, with some calling it not much more than a vacuous attempt at attracting international investment.

"Everything about NEOM seems like it was dreamed up by a Saudi official who watched a sci-fi movie on [the Middle East Broadcasting Center] at like 4am and said 'that looks cool, let's throw $100bn at it,'" The Economist reporter Gregg Carlstrom wrote in a scathing tweet.

Despite the criticism, construction is set to begin in early 2021 and is expected to contribute $48 billion to the local economy as well as 38,000 jobs.

Read This Next
Butcher Shop
Neuralink Employees Admit Company Has Killed 1,500 Animals So Far
HIV Vaccine
Scientists Hopeful About Promising Results From HIV Vaccine
Health Revelation
Chris Hemsworth Reveals Grim Genetic Test Results, Will Take Break From Acting
PDA
Elon Musk Is Faving Posts on Twitter That Are Making Our Skin Crawl With Embarrassment
Baited
That "Research" About How Smartphones Are Causing Deformed Human Bodies Is SEO Spam, You Idiots
More on Sci-Fi Visions
Crypto Apocalypse
Yesterday on the byte
Crypto Investors Despondent After Losing Life Savings in FTX "Bloodbath"
LIfe Finds a Way
Dec 1 on the byte
Billionaire Private Astronaut Suggests Reviving Dinosaurs
Cybersecurity Dis...
Nov 13 on the byte
Insurance Company Refuses to Pay Ransom, So Hackers Start Releasing Health Records of Up To 10 Million People
READ MORE STORIES ABOUT / Sci-Fi Visions
Keep up.
Subscribe to our daily newsletter to keep in touch with the subjects shaping our future.
+Social+Newsletter
TopicsAbout UsContact Us
Copyright ©, Camden Media Inc All Rights Reserved. See our User Agreement, Privacy Policy and Data Use Policy. The material on this site may not be reproduced, distributed, transmitted, cached or otherwise used, except with prior written permission of Futurism. Articles may contain affiliate links which enable us to share in the revenue of any purchases made.
Fonts by Typekit and Monotype.