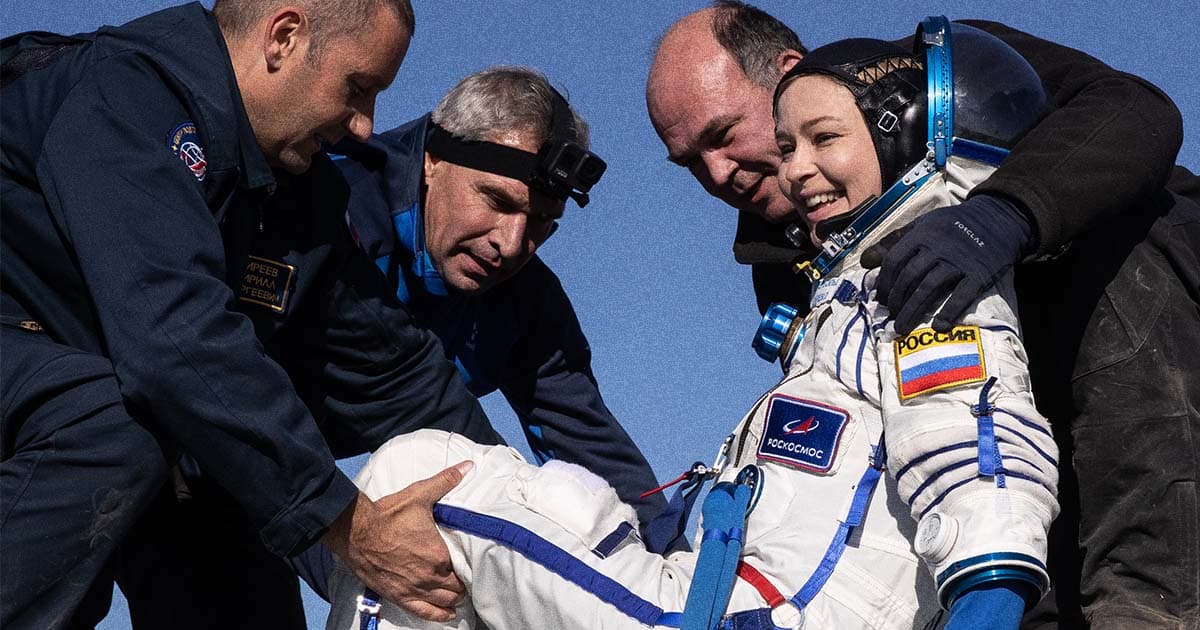 "Please, do not do any filming on your smartphones... because right now, this is actually the future end of the movie."

"Please, do not do any filming on your smartphones... because right now, this is actually the future end of the movie."

After 12 days of filming aboard the International Space Station (ISS), the first ever feature-length movie shot in space has finally wrapped filming in orbit — and its crew has safely landed back on Earth, as they kept filming during and after the journey home.

The crew consisted of actress Yulia Peresild and director Klim Shipenko, according to The New York Times. Russian cosmonaut Oleg Novitsky, who has been aboard the orbital outpost since April, also played a role in the film as an ailing astronaut. All three returned to Earth aboard the Soyuz MS-18 craft on Saturday, landing at 10:35am local time in Kazakhstan’s Karaganda Region.

The film, dubbed "The Challenge," wasn’t quite finished even after the crew left the ISS.

In fact, filming continued even as they boarded the return capsule and after they landed in Kazakhstan, where they were greeted with an entire film crew as well as an astronaut recovery team.

"Guys, please, let us do some shooting," a producer shouted to the crowd in a live video stream seen by the NYT. "Please, do not do any filming on your smartphones. Do not take any videos, because right now, this is actually the future end of the movie."

The crew reportedly filmed at least four takes of a scene in which an actor greeted Novitsky and Peresild — making this perhaps the strangest spectacle to take place after astronauts returned to Earth. The film’s ISS crew is now expected to go through a 10-day transition period in which they’ll recover from living in a microgravity environment.

Despite the much ballyhooed production of "The Challenge," the filming aboard the ISS was strangely quiet. While Peresild and Shipenko gave some nice quotes when they initially arrived, little else was heard over the 12 days of filming.

That isn’t to say that production was completely without excitement. For one, the crew’s capsule was delayed due to software issues. The same capsule also ended up spinning the ISS yet again after Novitsky was allegedly attempting to test its engines.

Of course, many film productions are secretive about plots and storylines. Plus, the Russian government isn’t exactly known to share information about… well, anything. But with the fanfare surrounding the film and the coincidental "accident" involving another Russian module spinning the ISS out of control, we’re beginning to suspect there might be more dastardly motives afoot.

Finger Pointing
Russia Warns That Nuclear Plant It Captured May Leak Waste Over Europe
Aug 18
Read More
Sobering News
Ukrainian Hackers Allegedly Cut Off Russian Soldiers' Beloved Vodka Supply
May 7
Read More
Hell on Earth
Internet Aghast at AI Facial Recognition Used to Identify Dead Russian Soldiers
Apr 16
Read More
+Social+Newsletter
TopicsAbout UsContact Us
Copyright ©, Camden Media Inc All Rights Reserved. See our User Agreement, Privacy Policy and Data Use Policy. The material on this site may not be reproduced, distributed, transmitted, cached or otherwise used, except with prior written permission of Futurism. Articles may contain affiliate links which enable us to share in the revenue of any purchases made.
Fonts by Typekit and Monotype.