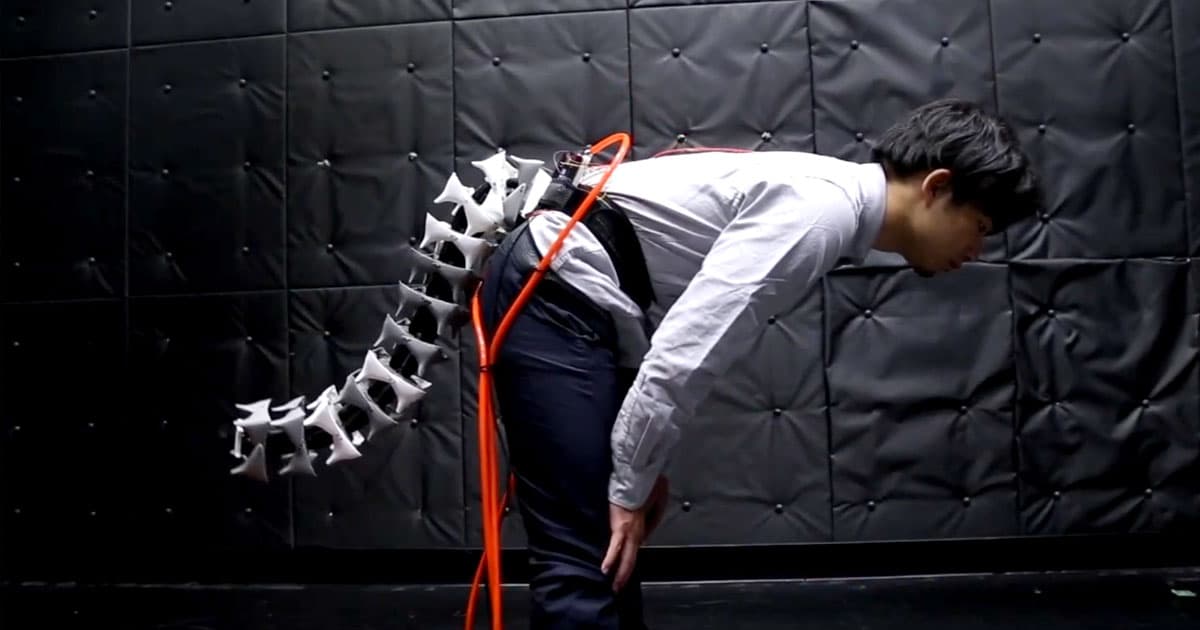 A prototype robot tail, inspired by that of a seahorse, can help users balance or maybe make VR gaming more immersive.

The Keio University scientists who built the tail call it Arque, according to Fast Company. With built-in artificial muscles and vertebrae, the tail uses a pneumatic system to bend and move along with the wearer, acting as a smart counterbalance as they lean over or sway. While the robot tail is still fairly limited in functionality, it’s an unusual glimpse into the future of human-augmenting technology.

It’s too soon to pick up a new robot tail to use as a robotic cane, like the one Columbia University engineers developed last month. While the Keio University team behind Arque say their creation could someday be used to help people balance or carry heavy loads, the prototype system isn’t mobile yet. It needs to be anchored down to a massive air pump that powers its muscles.

Still, if a more functional version of Arque ever comes through the pipeline, it could give us Doctor Octopus-style enhancements. Or at the very least, per Fast Company, the tail could knock its wearer around and throw them off balance to make virtual reality games a lot more immersive and interesting.

Hand That Feeds
A Wearable Robot Arm Makes You Work for Thanksgiving Leftovers
11. 23. 18
Read More
Exoskeletons are About to Walk Ford’s Factory Floors
8. 8. 18
Read More
Pacific Rim’s Robots Are Less Advanced Than Some of Today’s Real Robots
3. 28. 18
Read More
+Social+Newsletter
TopicsAbout UsContact Us
Copyright ©, Camden Media Inc All Rights Reserved. See our User Agreement, Privacy Policy and Data Use Policy. The material on this site may not be reproduced, distributed, transmitted, cached or otherwise used, except with prior written permission of Futurism. Fonts by Typekit and Monotype.