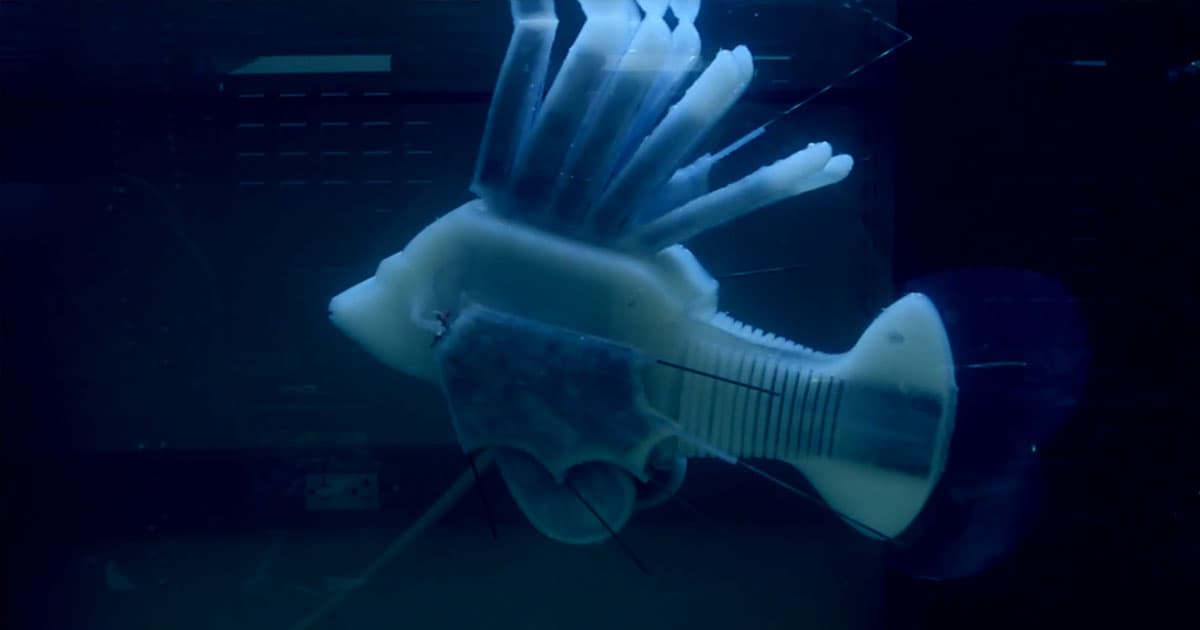 Robot Fish Can Swim For 37 Hours With Blood-Powered Batteries

And it looks creepy as hell.

And it looks creepy as hell.

Do We Not Bleed?

A new robotic lionfish can swim around thanks to a synthetic circulatory system, which pumps artificial blood made of battery fluid, around to its various components and motors.

The synthetic blood allows the robot to store 325 percent more energy than if it was carrying a separate battery pack, according to Nature News, enough juice to lazily paddle through the water for an impressive 37 hours. While the fish can't swim very fast or far, its life-giving bloodstream is an impressive example of how mimicking biological organisms could help a new generation of robots become more autonomous and efficient than ever before.

The robotic blood not only stores energy but also replaces the hydraulic fluid that would normally move the bot's fins. That helps the robot reach a dizzying top speed of 0.1 inches per second, New Scientist reports.

"1.5 body lengths per minute — that’s very slow," Robert Shepherd, the Cornell University engineer behind the fish, told New Scientist, "kind of like a loiter for a fish."

Doing away with battery packs and hydraulic fluids could give robots the energy efficiency needed to become more autonomous and operate for longer periods of time without supervision.

This particular fish won't be the first to go far — even at its calculated, untested lifespan of 37 hours, it would barely make it out of the tank.

More on animal-inspired robots: Scientists Built a Robot Sloth to Study Other Sloths