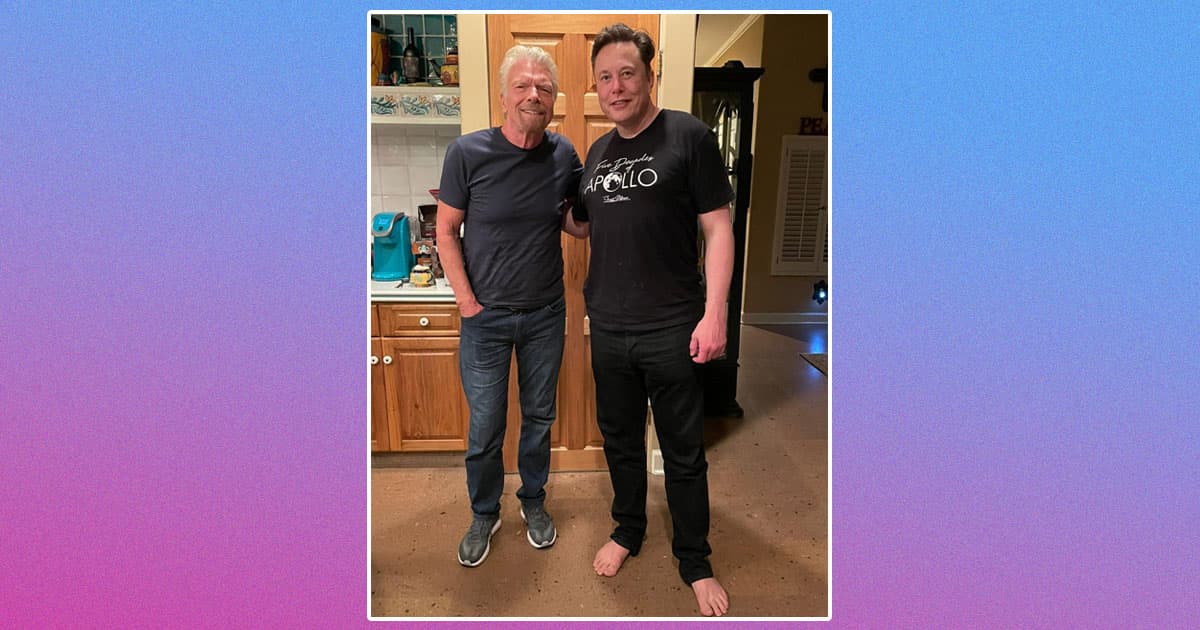 "We made a pot of tea and sat outside under the stars and caught up."

"We made a pot of tea and sat outside under the stars and caught up."

POV: you're so hyped up for your first flight to space that you wake up around 2am, roughly two hours earlier than you're supposed to get up. You go downstairs for a cup of water, and to your surprise, you find... a barefoot Elon Musk standing in your kitchen, infant son in his arms.

"I think it was about 2:30 am," Richard Branson, the British billionaire who founded Virgin Airlines, told The Sunday Times, recounting the wee morning hours of his July 11, 2021 trip to Almost Space with Virgin Galactic, his spinoff space tourism venture. "I woke up two hours earlier than I was meant to and jumped out of bed."

"Elon had decided to surprise us," Branson continued, clarifying that a staff member had let a barefoot Musk — a wild detail seemingly confirmed by a photo tweeted by Branson — into the airline entrepreneur's New Mexico home. "He was there with his baby." (The baby in question was X Æ A-12 Musk, the SpaceX founder's child with ex-girlfriend Claire "Grimes" Boucher.)

If you're thinking "huh, I don't usually take my baby to hang out barefoot in my friends' kitchens at 2am," we would have to concur. But hey, maybe billionaire fun is just different than that of us normies. And Musk, as Branson notes, is a notorious night owl.

"Basically, he's a night animal. He doesn't really sleep at night and gets his sleep in the daytime," Branson explained, referring to Musk elsewhere as "tremendously smart and even more driven," as well as "the Henry Ford of his generation."

"We made a pot of tea," the blondish billionaire reminisced, "and sat outside under the stars and caught up."

To be fair, Branson was about to Almost But Definitely Not Travel to Space for the first time, which, billions aside, is probably a big deal for just about anyone.

And honestly? Catching up with a pal, tea in hand and shoes optional, does sound like a solid way to start one of the biggest, or at least riskiest, days of your life. Here's to supporting friends — no matter the hour, and no matter the choice (or lack thereof) of footwear.

Updated to correct a mistaken reference to Richard Branson's nationality.