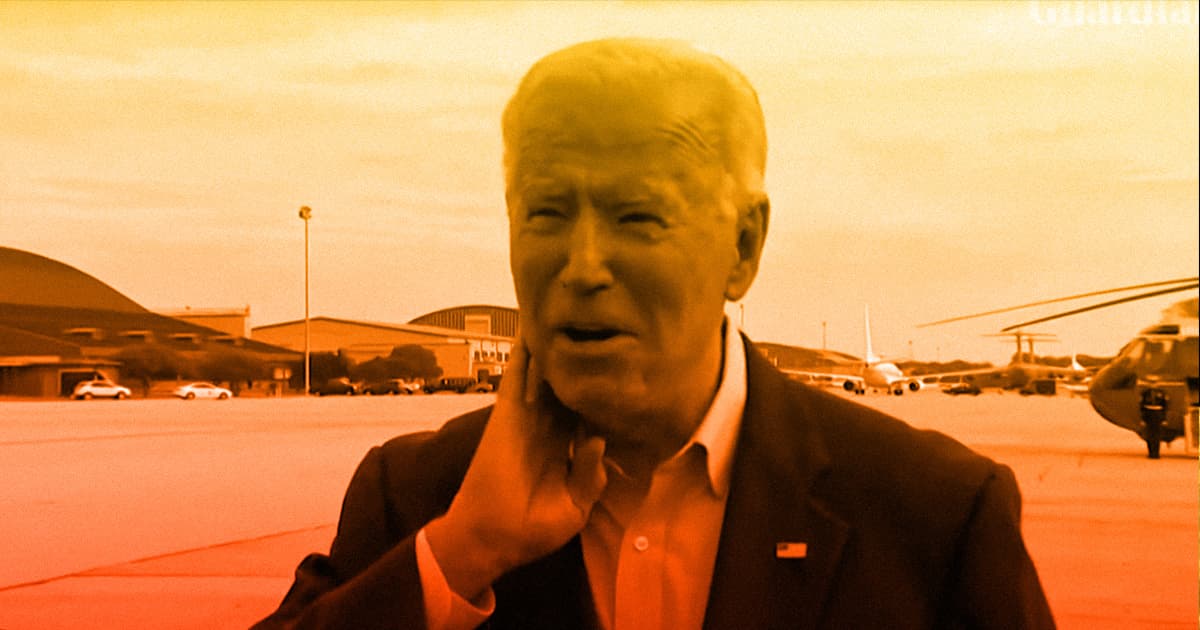 Watch President Biden Get Attacked by a Brood X Cicada

On Tuesday, a White House press plane was grounded by a swarm of Brood X cicadas that had recently emerged from their 17 year slumber. The tiny critters managed to get into the engine, preventing the plane from leaving ahead of Biden on his first trip overseas as president, The Wrap reports.

In fact, the attack got so bad, one particularly adventurous cicada appears to have managed to get hold of POTUS. As seen in CNN footage, Biden attempted to swat it away from his neck.

These cicadas have no limits. pic.twitter.com/bLmE5igdPL

Moments later, Biden warned a nearby crowd of reporters "watch out for the cicadas. I just got one. It got me."

Estimated trillions of Brood X cicadas emerged last month, crawling out of the soil all over North America. They're practically everywhere, but luckily, predators including copperhead snakes, birds, squirrels, wasps, and spiders are waiting for the biggest snack of their lives, as The Guardian reports.

One lucky cicada, though, seems to have gotten through the defenses.

"Where was the Secret Service?!?!" writer Charlotte Clymer chimed in.

It's unlikely federal investigators will attempt to seek out the cicada responsible for the attack.

As for the White House's grounded plane, the swarm offensive didn't come as a shock.

"I’m not surprised," CNN’s Manu Raju said on air Wednesday morning. "The first thing I thought of was, 'It happened to me. It’s going to happen to you, too.'"

"And it clearly did here with this press plane because those beasts are everywhere in Washington, D.C. Outside my house I’m stepping on dead cicadas everywhere," he added.

Biden will have to watch his back.

"It happened once and it certainly can happen again," Raju warned.

READ MORE: Watch President Biden Do Battle With a Cicada: ‘It Got Me’ (Video) [The Wrap]

More on cicadas: Cicadas Are Crazy Good At Math.. Here’s Why

What's a Space Force?
Progressive Groups Call For Elimination of Space Force
11. 18. 20
Read More
Joe Biden Just Chose a Side in the Universal Basic Income Debate
9. 19. 17
Read More
A National Cybersecurity Council Just Lost 8 of Its 28 Members
8. 28. 17
Read More
+Social+Newsletter
TopicsAbout UsContact Us
Copyright ©, Camden Media Inc All Rights Reserved. See our User Agreement, Privacy Policy and Data Use Policy. The material on this site may not be reproduced, distributed, transmitted, cached or otherwise used, except with prior written permission of Futurism. Articles may contain affiliate links which enable us to share in the revenue of any purchases made.
Fonts by Typekit and Monotype.