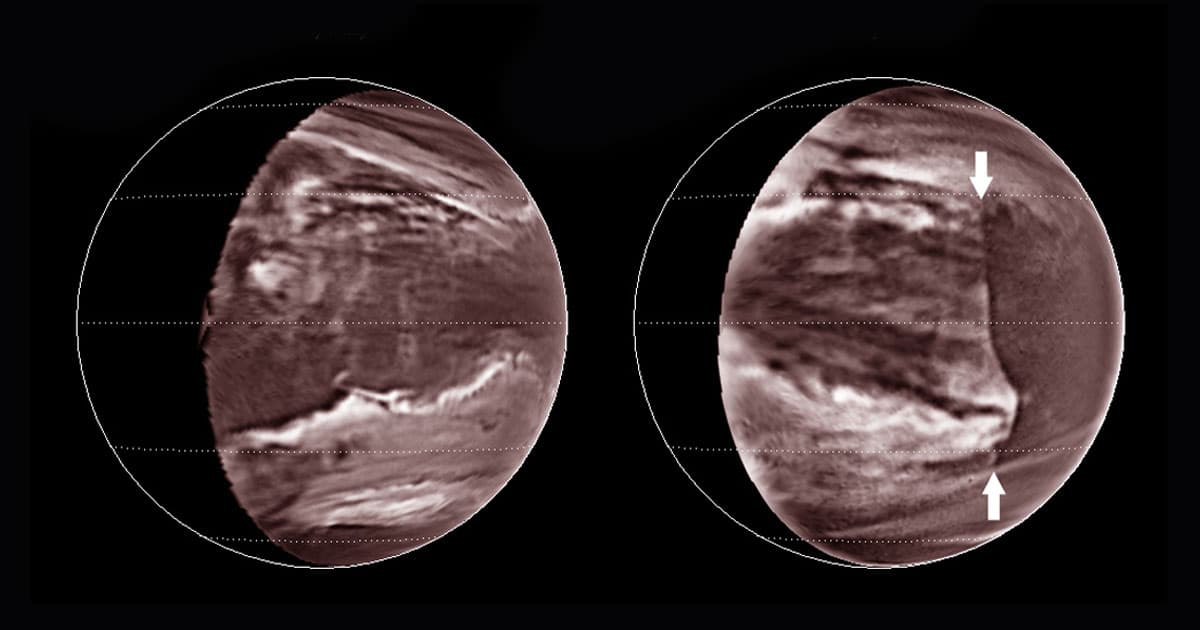 A Poisonous Tsunami Is Screaming Across the Surface of Venus

It's been going for at least 35 years — and we're not exactly sure why.

It's been going for at least 35 years — and we're not exactly sure why.

Astronomers have discovered that a gigantic wall of poisonous clouds is sweeping across the surface of Venus every few days — and has been doing so for decades, ScienceAlert reports. It's so massive, in fact, it reaches far beyond the planet's equator to both the north and south mid latitudes at altitudes of around 50 kilometers.

"If this happened on Earth, this would be a frontal surface at the scale of the planet," said astrophysicist Pedro Machado at the Institute of Astrophysics and Space Sciences in Portugal, co-author of a paper about the research published in the journal Geophysical Research Letters in May, in a statement. "And that’s incredible."

The study, led by the Japanese space agency JAXA, suggests this wave has been traveling around Venus since at least 1983 at about 328 kilometers per hour.

Venus is kept at a blistering 465 degrees Celsius near the region where these cloud patterns were observed thanks to an extreme greenhouse effect. Most of Venus's atmosphere is made up of carbon dioxide with sulfuric acid raining down from the skies.

Yet many other aspects of Venus's atmosphere remain a mystery — and the observation of this massive wave could could help build a fuller understanding in the future.

"We would have finally found a wave transporting momentum and energy from the deep atmosphere and dissipating before arriving at the top of the clouds," explained Javier Peralta, an astrophysicist at JAXA and lead author of the study, in the statement.

"It would therefore be depositing momentum precisely at the level where we observe the fastest winds of the so-called atmospheric super-rotation of Venus, whose mechanisms have been a long-time mystery," he added.

The exact mechanisms of this tidal wave are still not entirely understood. It's an entirely new meteorological phenomenon, according to the researchers, that has never been seen on any other planet.

READ MORE: An Epic, Planet-Scale Wave Has Been Hiding in The Toxic Clouds of Venus For Decades [ScienceAlert]