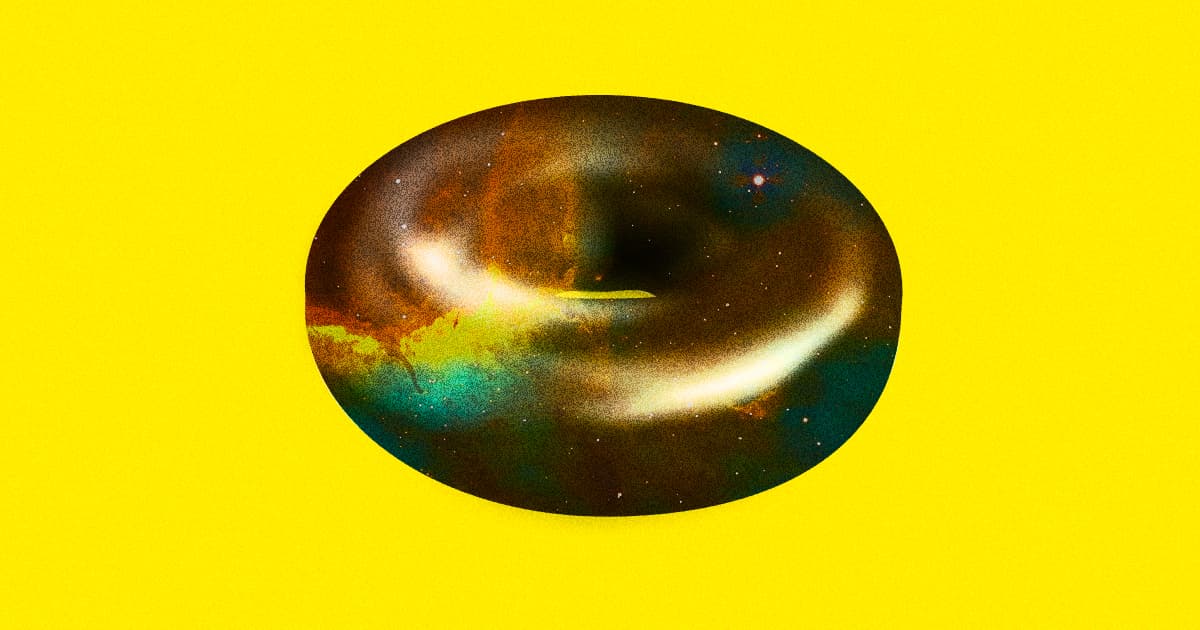 Physicists Say the Universe Wraps Around Itself Like a Giant Donut

"We could say: Now we know the size of the universe."

"We could say: Now we know the size of the universe."

According to new astrophysics research, our universe may not be expanding outward in all directions. Instead, it may be rolled around itself like a gigantic cosmic donut.

A team of European scientists argue in preliminary research that the folded universe — the edges of which connected in multiple places to form a closed loop — may make more sense than the endless expanse that we typically imagine, they told Live Science. And while the idea hasn't been definitively proven, it does present some interesting implications for the structure, behavior, and ultimate fate of our universe.

If the donut-universe hypothesis ends up being true, then that would mean a couple of important things. One is that a multiply-connected universe means that the cosmos are finite and smaller than expected — just three to four times larger than the observable limits — even if it's still imperceptibly massive from our point of view.

"We could say: Now we know the size of the universe," study coauthor and University of Lyon astrophysicist Thomas Buchert told Live Science.

It would also mean that our universe is doomed to collapse in on itself rather than expanding infinitely outward, Live Science notes.

Though the question is far from settled, there is good evidence for the donut hypothesis, Live Science reports. In order to determine the universe's topology, the astrophysicists measured perturbations in the cosmic microwave background (CMB), which is sort of like the ambient noise of the cosmos that was given off when the universe began. What they found is that there seems to be a cap on how big those perturbations can get. Unless the researchers made an error, that's an indication that the universe closes in on itself, as an infinitely-open universe would be able to fit CMB perturbations of any size.

The elephant in the room, of course, is the question of what happens when an object reaches the "edge" and loops back around. Unfortunately, Live Science notes, that's not actually possible. No matter its shape, the universe is still expanding faster than the speed of light, so no one and nothing could ever travel far enough to test it out.

READ MORE: Our universe might be a giant three-dimensional donut, really. [Live Science]

More on the universe: Scientists Claim the Universe Is Actually Flat