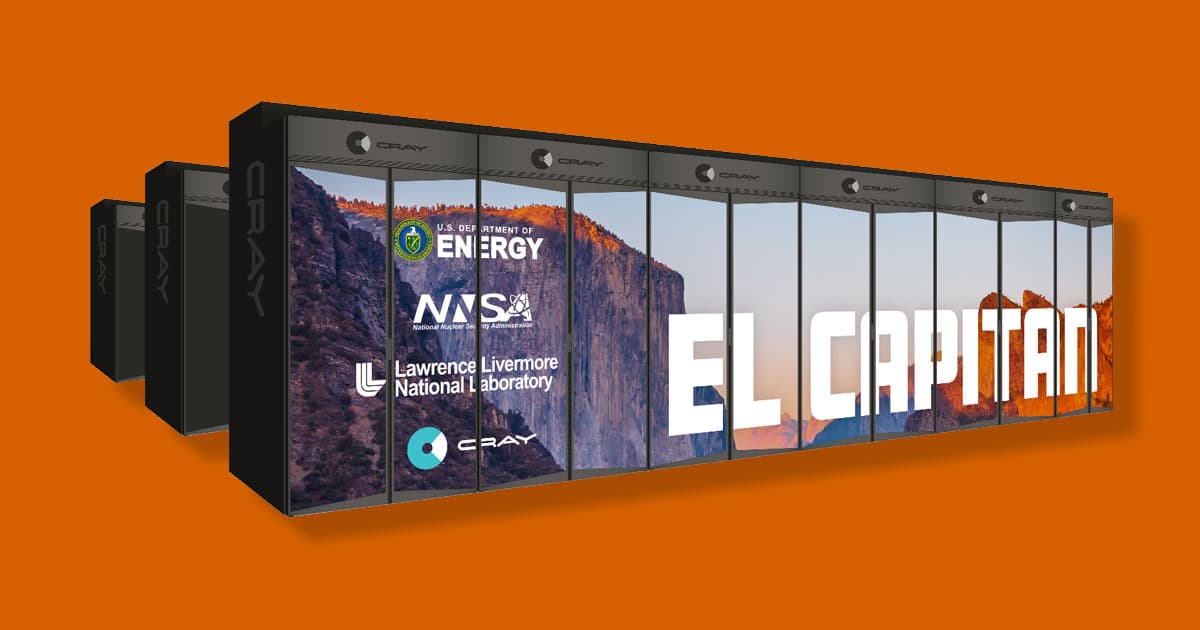 This $600 Million Supercomputer Will Manage the US’s Nukes

In 2000, Congress created the National Nuclear Security Administration (NNSA) to manage the United States' nuclear stockpile — and starting in 2023, the agency will do so with the help of El Capitan, an incredibly powerful supercomputer.

“NNSA is modernizing the Nuclear Security Enterprise to face 21st- century threats," NNSA administrator Lisa E. Gordon-Hagerty said in a statement. "El Capitan will allow us to be more responsive, innovative, and forward-thinking when it comes to maintaining a nuclear deterrent that is second to none in a rapidly-evolving threat environment."

Supercomputer manufacturer Cray announced on Tuesday that it had signed a contract to create the $600 million supercomputer, which the U.S. government will use for such purposes as simulating how nuclear weapons age and assessing threats to national security.

El Capitan will be the NNSA's first exascale supercomputer, a class reserved for computers capable of a quintillion calculations per second. With a peak performance of 1.5 exaflops, it'll be more powerful than today's top 100 supercomputers combined.

"El Capitan will allow our scientists and engineers to get answers to critical questions about the nuclear stockpile faster and more accurately than ever before," LLNL lab director Bill Goldstein said in the statement, "improving our efficiency and productivity, and enhancing our ability to reach our mission and national security goals."

READ MORE: Cray is building a supercomputer to manage the US' nuclear stockpile [Engadget]

Bomber Drones
New Russian Submarine Can Launch Nuke-Carrying Drones
3. 14. 19
Read More
America Now Has The Fastest Supercomputer In The World. Here’s Why That Actually Matters
6. 11. 18
Read More
How the United States Plans to Reclaim Its Supercomputer Dominance
2. 8. 18
Read More
+Social+Newsletter
TopicsAbout UsContact Us
Copyright ©, Camden Media Inc All Rights Reserved. See our User Agreement, Privacy Policy and Data Use Policy. The material on this site may not be reproduced, distributed, transmitted, cached or otherwise used, except with prior written permission of Futurism. Articles may contain affiliate links which enable us to share in the revenue of any purchases made.
Fonts by Typekit and Monotype.