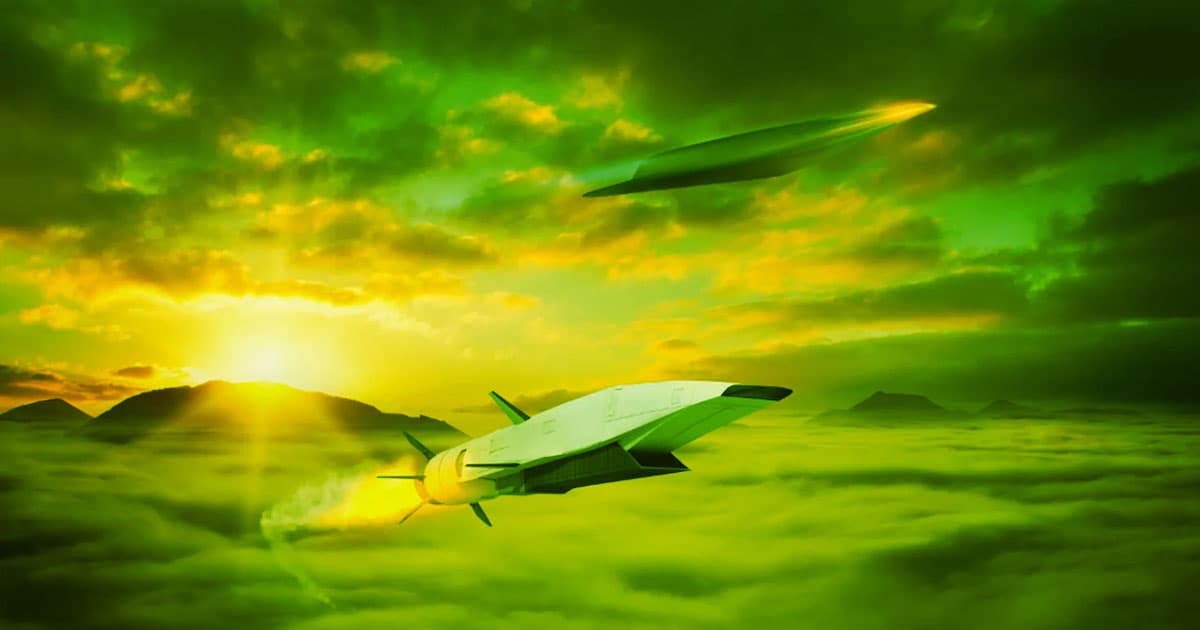 The missile comes from a new partnership between Raytheon and Northrop Grumman.

The missile comes from a new partnership between Raytheon and Northrop Grumman.

Weapons developers Raytheon and Northrop Grumman are ready to start flight tests for their new hypersonic missile, which is capable of firing a nuclear warhead at five times the speed of sound.

The two companies announced that they'd partnered up at Tuesday's Paris Air Show, according to Defense News. The missile is the companies' bid for a hypersonic weaponry contract with the government, which would herald in a terrifying new age of warfare where powerful missiles travel too quickly to be intercepted.

DARPA, the U.S. military's dedicated research division, has put out a call for developers to build what it calls an "air-breathing" hypersonic weapon, per Defense News, that should be able to take in and compress air as it flies, then combusting it to further propel and accelerate the weapon.

The weapon, according to Reuters, will be able to carry nuclear warheads as well as conventional payloads.

Based on the presentation given by Tom Bussing, vice president of Raytheon's advanced missile division, it sounds like the new missile — built by Raytheon and housing a 3d-printed Northrop engine — is about ready.

"We have a flight test planned for the near future where we will begin flying this particular class of weapon system," he told the crowd at Paris.

zombie star
Scientists Puzzled by Star That Exploded in Supernova But Somehow Survived
6. 28. 22
Read More
Cocktail Sauce
DARPA Wants to Use Noisy Shrimp to Detect Enemy Subs
3. 25. 19
Read More
DARPA Wants to Use Genetic Modification to Turn Plants into Spy Tech
11. 25. 17
Read More
+Social+Newsletter
TopicsAbout UsContact Us
Copyright ©, Camden Media Inc All Rights Reserved. See our User Agreement, Privacy Policy and Data Use Policy. The material on this site may not be reproduced, distributed, transmitted, cached or otherwise used, except with prior written permission of Futurism. Articles may contain affiliate links which enable us to share in the revenue of any purchases made.
Fonts by Typekit and Monotype.