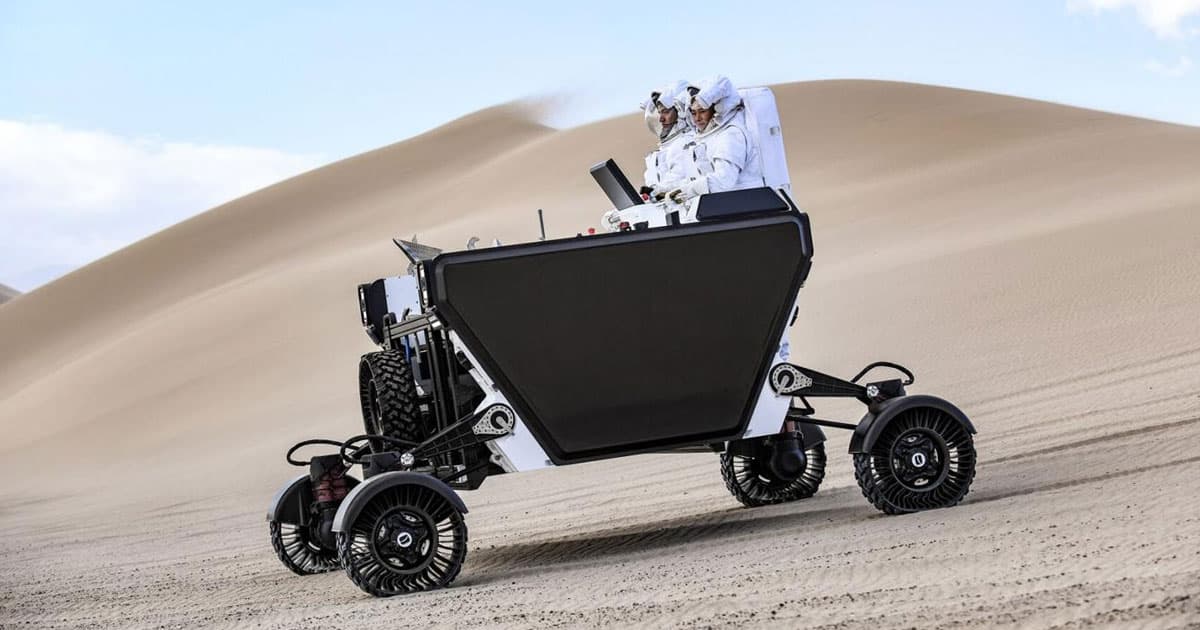 "We want to be the UPS, FedEx, and the Uber of the Moon."

"We want to be the UPS, FedEx, and the Uber of the Moon."

Aerospace startup Venturi Astrolab has shown off a futuristic new lunar rover meant to ferry astronauts across the surface of the Moon and even Mars — and we can't shake the feeling that it looks an awful lot like a giant baby stroller.

While it's unclear if the Flexible Logistics and Exploration (FLEX) will make it to the Moon in time for NASA's upcoming crewed mission there, it's an inspiring look at what interplanetary transportation could one day look like. It's undeniably a far cry from the rather spartan-looking lunar buggies driven by astronauts during the Apollo days.

The FLEX rover is meant to move payloads around the surface, but can also be adapted to carry crews of astronauts around.

The company showed off a full-scale prototype, testing it out near Death Valley, deep in the California desert. Canadian astronaut legend Chris Hadfield took the rover for a stroll as well, advising the company on the vehicle's design.

While the prototype had to be built far more robustly to make up for Earth's gravity, the company is aiming to slim the final design down to just 1,100 pounds.

"We want the hardware to be super robust so that they can essentially drive it like they stole it and not have to worry about it," Astrolab CEO Jaret Matthews told The Verge.

The company has some great ambitions for it, as well.

"We want to be the UPS, FedEx, and the Uber of the Moon," he proclaimed.

Astrolab is seeing interplanetary transportation as a big opportunity and wants to get in on the ground floor.

"For humanity to truly live and operate in a sustained way off Earth, there needs to exist an efficient and economical transportation network all the way from the launch pad to the ultimate outpost," Matthews said in a press release.

"Currently, there is a gap in the last mile and Astrolab exists to fill it," he added.

More on lunar roving: China Says Rover Discovered Glass Spheres on the Dark Side of the Moon

Moon Unit
Chinese Rover Exploring What Appears to Be Cube-Shaped Object on Moon
12. 4. 21
Read More
Baby, would you ride with me
General Motors Is Working on a Self-Driving Electric Car for Moon Astronauts
5. 26. 21
Read More
Touchdown
China Just Landed a Rover on the Far Side of the Moon
1. 3. 19
Read More
+Social+Newsletter
TopicsAbout UsContact Us
Copyright ©, Camden Media Inc All Rights Reserved. See our User Agreement, Privacy Policy and Data Use Policy. The material on this site may not be reproduced, distributed, transmitted, cached or otherwise used, except with prior written permission of Futurism. Fonts by Typekit and Monotype.