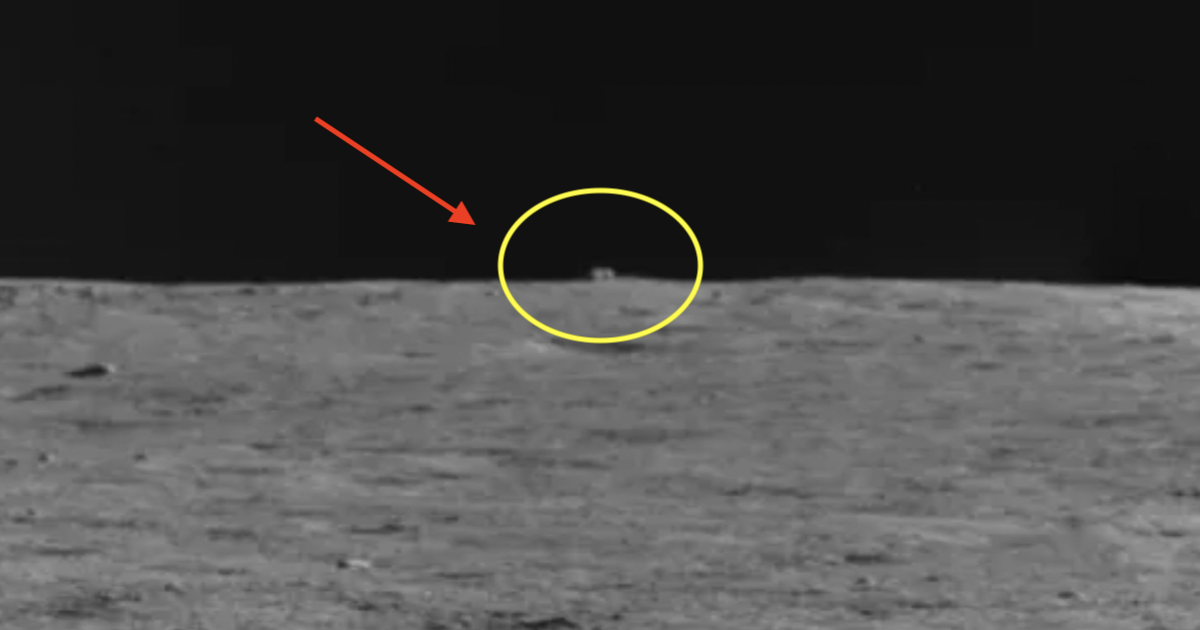 There's a Moon cube now! At least, it looks that way based on some intriguing photos from the Chinese lunar rover Yutu-2, released by the country's space agency this week.

The photos show a distant object that looks like a perfect cube, and China say the rover is headed to check it out.

It's worth worth noting a few caveats about the photo, spotted yesterday by space journalist Andrew Jones, who described the formation as a "cubic shape." For one thing, the object is just a few pixels in the photo, meaning it could easily be some sort of optical illusion that'll be a disappointment up close.

And China has struggled with lunar science communication in the past. In 2019, Yutu-2 "discovered" a "gel-like substance" on the lunar surface, but upon closer inspection it turned out to be, well, rocks. It also trumpeted the discover of a "shard" on the Moon earlier this year, but that turned out to just be another interesting rock. Did we mention that there's not a lot other than rocks on the Moon?

Jones, for his part, is managing expectations.

"So yeah, it's not an obelisk or aliens, but certainly something to check out," Jones tweeted in followup.

The idea of alien artifacts on the Moon runs deep in popular culture — remember that one scene in "2001: A Space Odyssey"? — but, needless to say, none have been found in reality.

The apparent cube sits in the Von Kármán crater, and China's space program has been dubbed it, evocatively, the "mystery house."

Yutu-2 will spend two or three lunar days traveling to investigate the cube, each of which is about 29 Earth days long.

Jones speculated that the object could be a boulder carved out by an asteroid impact, and posted a photo of a similarly sharply defined boulder found previously on the Moon's surface.

CNET's coverage of the most recent discovery agrees with Jones' analysis, saying the most likely explanation is that the Moon cube is a boulder.

That's not to say Yutu-2 hasn't ever found anything cool. In 2019, CNET reported the rover discovered that the Moon's surface was made of different materials than we previously thought, a discovery that could better predict how Earth's internal layers might change over time.

We're not saying there isn't weird stuff on the Moon. After all, we just recently found enough buried oxygen under its surface to sustain billions of people. But suffice it to say we aren't holding our breath over Moon cube, and if it turns out to be anything other than a rock we'll be really impressed.

Updated to correctly state the length of a lunar day.

Read This Next
So Long
Tragedy! NASA Says the Voyager Space Probes are Powering Down
Expect Delays
Scathing Report Admits NASA Is Years Behind Moon Landing Schedule
Astronaut Drip
We Just Got the First Peek at NASA's Artemis Moon Landing Suits
Moonwalk Drip
NASA Inks Deals for Moonwalking Suits for Artemis Landings
Ice Ice Baby
Check Out This Moon-Shaped Ice Crystal on the Space Station's Window
More on Off World
TMNT
Friday on the byte
Chunky Turtle Spotted Near NASA's Mega Moon Rocket
Cloud Spotting
Thursday on the byte
NASA Needs Your Help Spotting Clouds On Mars
Rolling Coal
Wednesday on futurism
Space Travel Will Absolutely Gut the Environment, Scientists Warn
READ MORE STORIES ABOUT / Off World
Keep up.
Subscribe to our daily newsletter to keep in touch with the subjects shaping our future.
+Social+Newsletter
TopicsAbout UsContact Us
Copyright ©, Camden Media Inc All Rights Reserved. See our User Agreement, Privacy Policy and Data Use Policy. The material on this site may not be reproduced, distributed, transmitted, cached or otherwise used, except with prior written permission of Futurism. Fonts by Typekit and Monotype.