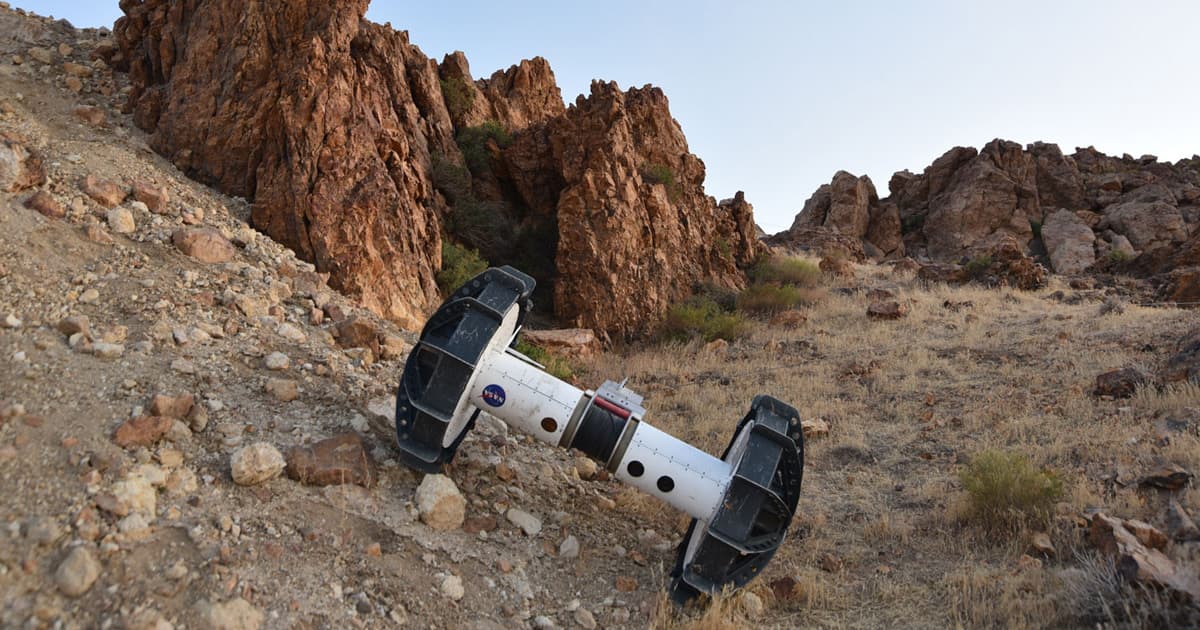 Watch it split in half — and continue the mission.

Watch it split in half — and continue the mission.

NASA just showed off a four-wheeled rover, dubbed DuAxel, that can split into two separate two-wheeled rovers. The spunky bot is designed to one day explore some of the toughest terrains on the Moon, Mars, and beyond.

The design offers some crucial advantages over its bulky, six-wheeled cousins. By planting half of itself into the ground, a second single axle can detach itself and rappel itself down steep slopes via an attached wire, as shown in this NASA video.

NASA's Jet Propulsion Lab already tested such a scenario during a field experiment in the Mojave Desert where it "performed extremely well," according to JPL robotics technologist Issa Nesnas. "Axel then autonomously maneuvered down steep and rocky slopes, deploying its instruments without the necessity of a robotic arm," he said.

The rover's four-wheel configuration could cover long distances, while the two-wheeled versions could explore geographic features never traveled before.

"DuAxel opens up access to more extreme terrain on planetary bodies such as the Moon, Mars, Mercury, and possibly some icy worlds, like Jupiter's moon Europa," Nesnas said.

On two wheels, it's basically impossible to immobilize it.

"This is why I find the Axel rover to be quite delightful," JPL planetary geologist Laura Kerber mused. "Instead of always trying to safeguard itself against dangers such as falling or flipping over, it is designed to withstand them."

We've already spotted some cool features DuAxel could explore. For instance, satellite imagery shows dark features on the surface of Mars that suggest the existence of crater walls that are too steep for conventional rovers to conquer.

More on Mars robots: This Wiggly Mars Rover Is the Silliest Thing We've Ever Seen