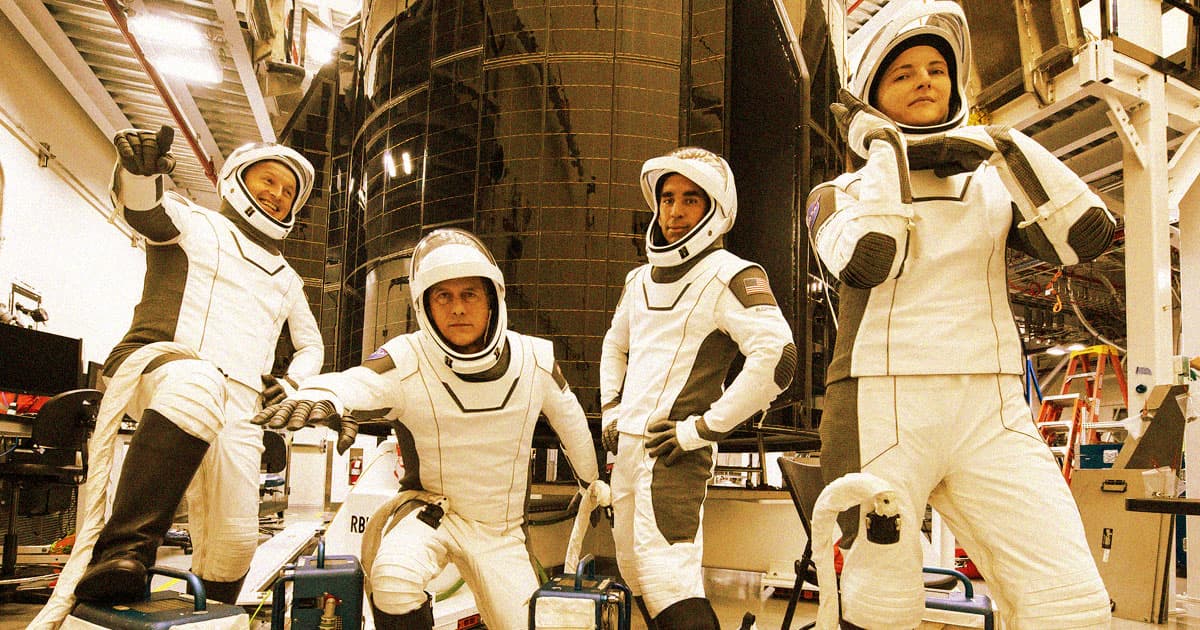 NASA: SpaceX Toilet Still Broken, Astronauts Will Have to Pee Themselves

Astronauts will have to rely on their "undergarments."

Astronauts will have to rely on their "undergarments."

Despite their best efforts, engineers at SpaceX won't be able to fix the leaky toilet on board the company's Crew Dragon spacecraft in time for the NASA astronauts set to launch on it imminently.

Their solution for this week's Crew-3 launch headed to the International Space Station: astronauts will have to resort to peeing their spacesuits, which essentially amount to diapers.

NASA's Commercial Crew Program manager Steve Stich told reporters on Friday that astronauts will have to rely on their "undergarments," CNN reports — a throwback to how astronauts used to have to do their business in the Apollo days, and still do during prolonged space walks.

The admission serves as yet another reminder that even after decades of spaceflight, space toilets remain an extraordinary engineering challenge.

While inspecting a different Crew Dragon spacecraft — ironically dubbed Resilience — last month, SpaceX engineers made a horrifying discovery. The toilet had sprayed human urine into a compartment underneath the capsule's floor while four unsuspecting space tourists made their joyride around the Earth over three days.

The Inspiration4 crew also had their own issues with the lavatory during the jorney, struggling with a misfunctioning vent fan.

The same issue showed up in the other Crew Dragon capsule, dubbed Endurance, which was meant to carry a crew of four to the ISS on Sunday. The launch had to be delayed yesterday for the second time due to a seemingly unrelated "minor medical issue." It's now scheduled to launch no earlier than this coming Saturday night.

Fortunately, the urine didn't cause any permanent damage to either of the two spacecraft — but that won't provide much relief for astronauts stuck inside the capsule for as long as 24 hours while traveling to the orbital outpost — or even longer, in the case of Inspiration4.

Last week, SpaceX officials announced they had found a solution to the spraying space toilet. But given Stich's comments on Friday, it sounds as though the fix has yet to be implemented.

Let's hope this week's crew will have the "Endurance" it takes to travel all the way to the ISS with diapers. Space travel just isn't always as glamorous as one might hope.