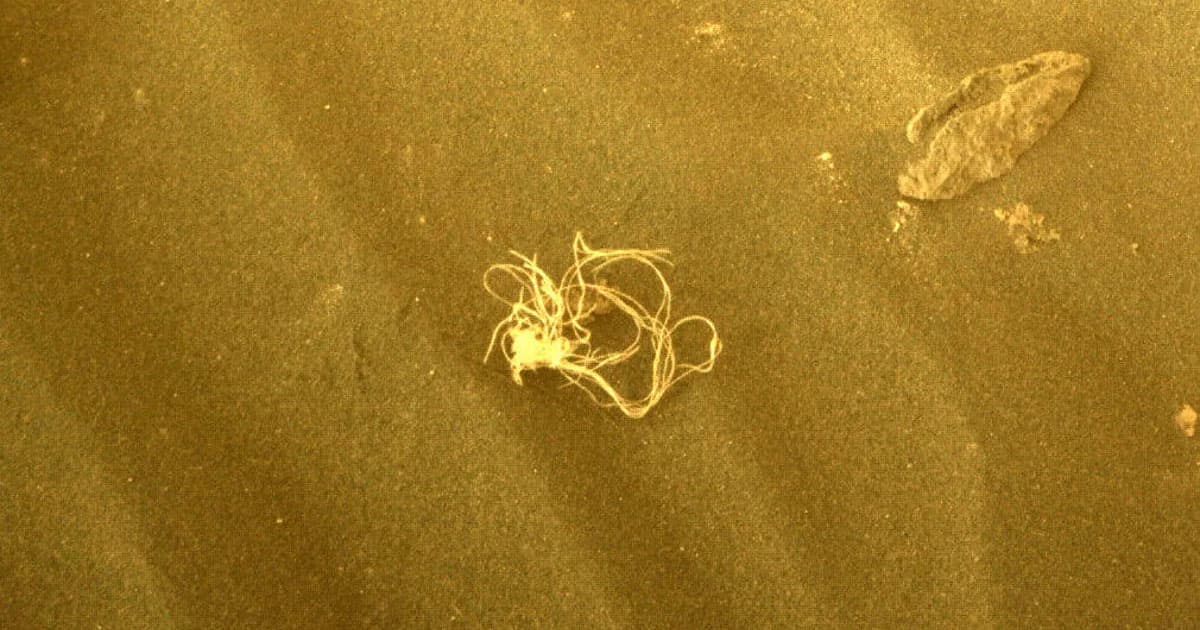 It's definitely not edible.

It's definitely not edible.

Appearing to be some sort of messy bundle of string, the object was first captured by the Mars rover’s camera on July 12 before mysteriously vanishing just four days later.

NASA was adamant that the stringy object was terrestrial in origin and not some Martian’s spilt ramen, speculating that it’s likely "a piece of cord from the parachute or from the landing system that lowers the [Perseverance] rover to the ground."

And now, as it turns out, the space agency wasn’t that far off. In a statement on Monday, NASA declared that the unknown object is nothing but a piece of Dacron netting, putting this Mars mystery to bed.

Dacron is a polyester fiber used as netting in thermal blankets, and while it may look unrecognizable now, that’s because it "appears to have undergone significant unraveling/shredding, suggesting that it was subjected to strong forces," according to NASA.

When the Perseverance rover landed on Mars in February of last year, its entry, descent, and landing (EDL) hardware flew off to crash a safe distance away. The EDL's impact scattered debris across the Martian surface, and that’s where the Dacron netting came from.

Considering that it crashed some 1.4 miles away from the rover, the material has traveled impressively far, likely due to wind, NASA said.

For the most part, a bundle of polyester string blowing around Mars is pretty harmless and amusing, but NASA isn’t messing around: team members are investigating photos of the material as it "may pose as a potential contamination source for the sample tubes" in the area where it was found, the space agency said — but fortunately, there aren’t any "immediate concerns."

There’s also a risk of the shredded material becoming entangled with the Perseverance rover itself, but NASA engineers deemed the risk to be "low."

In short, NASA doesn't see the Martian spaghetti as too much of a threat. After all, space debris being discarded on the Martian surface is quickly becoming a pretty common occurrence.