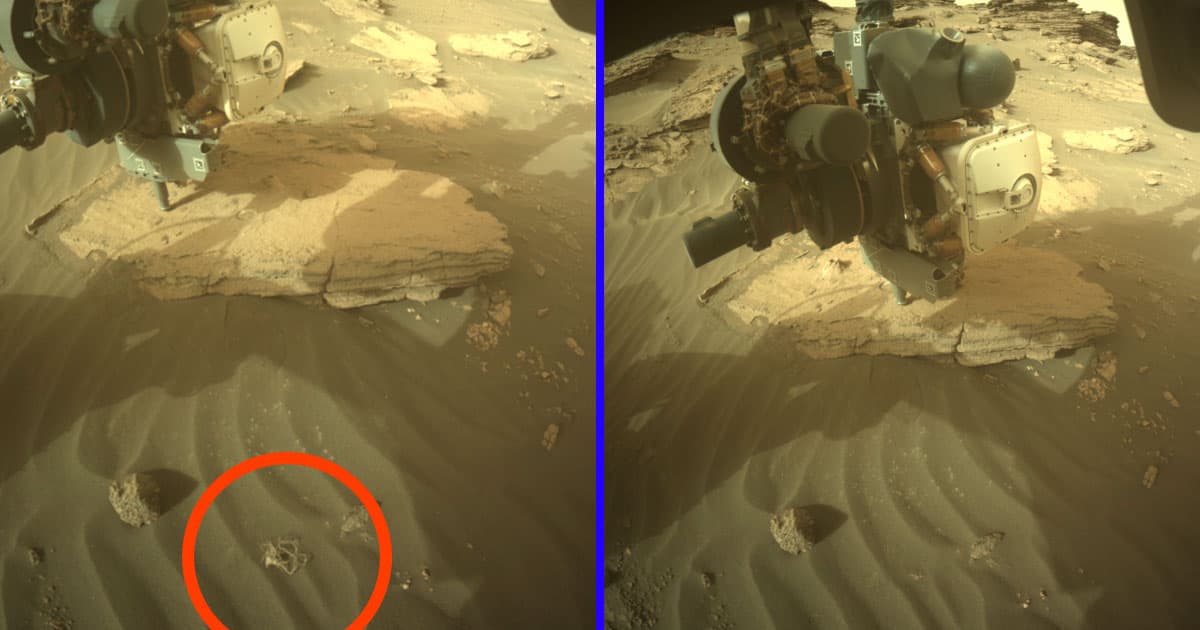 Where Did It Go?

Noodle-Like Object on Mars Has Disappeared, According to NASA Photos

An object that looks like a bundle of string, or possibly a noodle, that showed up in images taken by NASA's Mars Perseverance Rover earlier this month has suddenly disappeared, CNN reports.

The object can clearly be seen in July 12 images taken by the rover's Right Hazard Avoidance Camera (Hazcam). Just four days later, the object was gone.

To be clear, the object is likely Earthly in origin. While NASA has yet to confirm, a spokesperson for the mission at NASA’s Jet Propulsion Laboratory (JPL) told Agence France-Presse that "we have been discussing where it's from, but there's been speculation that it's a piece of cord from the parachute or from the landing system that lowers the rover to the ground."

"Note that we don't have confirmation that it's one or the other," the spokesperson added.

The location where the string showed up is some ways off from Perseverance's landing spot in the Jezero Crater, an ancient delta that experts believe was once covered in water.

Intriguingly, a JPL spokesperson — it's unclear if it was the same one — told CNN that it may have been blown there by the Martian wind.

It's likely we'll see more of NASA's trash left behind on the Martian surface. In April, for instance, Perseverance spotted its own parachute in the Martian desert after returning to the vicinity of its original landing spot.

Then, in June, the rover tweeted that "my team has spotted something unexpected," which turned out to be a "piece of a thermal blanket that they think may have come from my descent stage."

In short, space trash isn't just polluting Earth's orbit — you can now even find discarded debris on the surface of other planets.

More on the story: NASA Intrigued by Noodle-Like Object Found on Mars