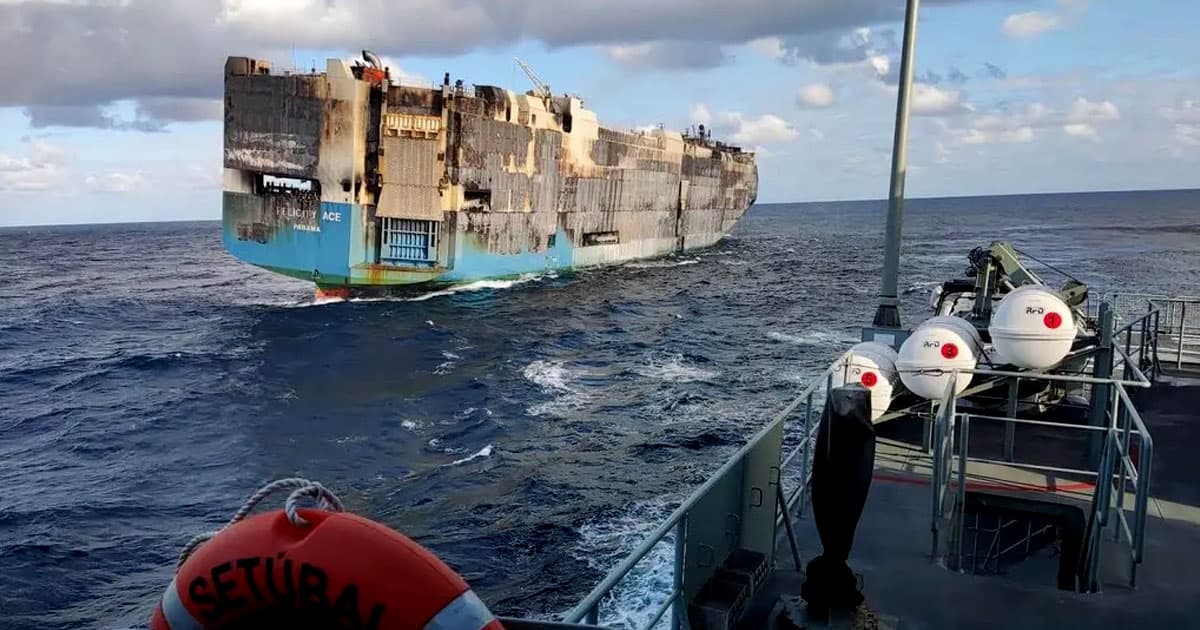 A huge cargo ship full of Bentleys and Porches that’s been burning in the Atlantic has finally succumbed to the depths.

As The New York Times reports, the cargo ship named Felicity Ace, which was carrying about 4,000 luxury cars made by Volkswagen Group destined for Rhode Island when it began to burn in the North Atlantic in mid-February, has finally sank after just under two weeks of being on fire.

With the sinking of these high-end vehicles, which the Russell Group risk analysis firm estimated at being worth about $400 million in total, comes concerns for the environment of the Azores, the archipelago off the coast of Portugal about 250 miles from where the ship sank. The area is covered in coral reefs, and is home to multiple species of whales as well as dolphins and sharks, all of which could be at risk from the sudden dump of harmful pollutants.

Not only does the ship itself hold millions of liters of heavy oil that burned for weeks, as the environmentalist group Oceana told the Times, but the lithium-ion batteries inside the electric vehicles on board also likely made the blaze much worse.

Known for being highly flammable, it remains unclear how much of a role the batteries played in the fire, though in an interview with Reuters after it began, the captain of the port on the Azorean island of Faial said the batteries were “keeping the fire alive.” The flames from infernos as hot as those resulting from ignited lithium-ion often can’t be put out with regular water, which was part of why efforts to extinguish the blaze took so long.

The Portuguese Navy confirmed in a statement that the Felicity Ace sank after attempts to tow it ashore. Previous reporting indicated that the ship’s crew had been safely evacuated, so there do not appear to have been any human casualties.

It will take a lengthy forensic investigation to determine what caused the fire, how much money the companies and consumers involved lost and, perhaps more importantly, how harmful this blaze will be for the nearby environment.

Piercing The Hype
If Graphene Batteries Do Everything Scientists Say, They Could Be a Gamechanger
11. 16. 20
Read More
Brands We Love
Cut Plastic Waste With a LastSwab Reusable Swab
8. 2. 20
Read More
End of the Road
Volkswagen Will Launch Its Last Gas-Powered Cars in 2026
12. 5. 18
Read More
+Social+Newsletter
TopicsAbout UsContact Us
Copyright ©, Camden Media Inc All Rights Reserved. See our User Agreement, Privacy Policy and Data Use Policy. The material on this site may not be reproduced, distributed, transmitted, cached or otherwise used, except with prior written permission of Futurism. Fonts by Typekit and Monotype.