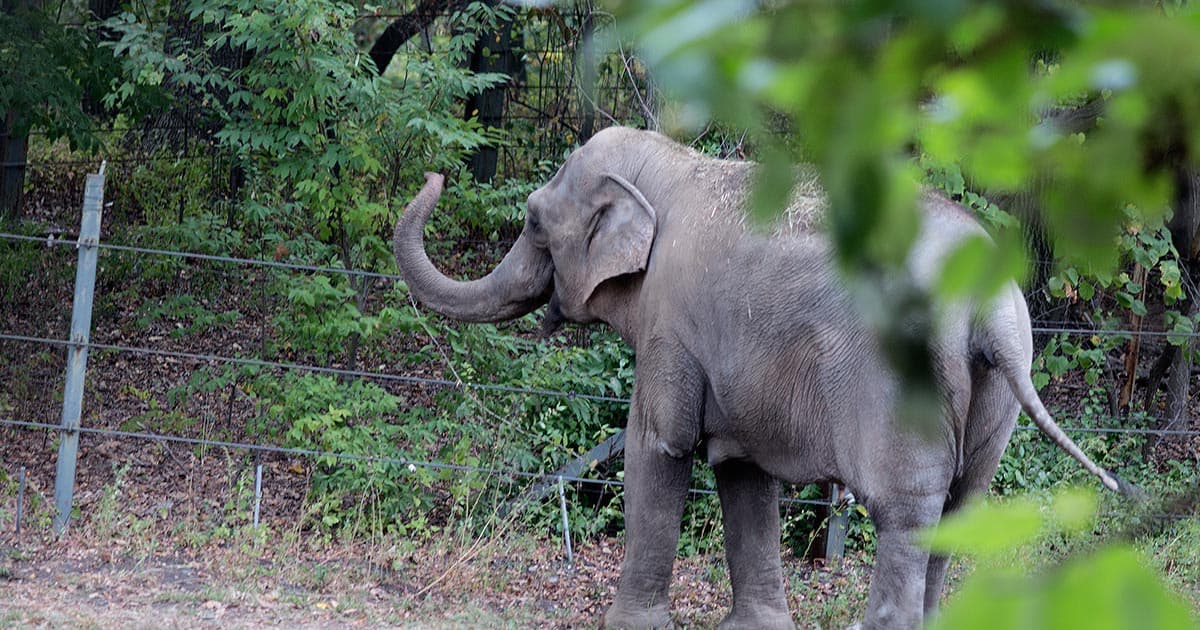 “For more than 40 years she has been kept as a prisoner.”

“For more than 40 years she has been kept as a prisoner.”

A New York elephant named Happy is getting her day in court, after activists filed to establish her as a legal person in the eyes of the law.

As the Wall Street Journal reports, lawyers from the Nonhuman Rights Project have filed a writ of habeas corpus on behalf of Happy to establish her legal personhood — and thusly free her from captivity at the Bronx Zoo, where she's lived and been on display since 1977, where she was taken when she was just six years old.

"The elephant is being imprisoned against her will," Steve​n Wise, Happy's lawyer from the NRP, told the WSJ.  "For more than 40 years she has been kept as a prisoner."

As the NRP notes on its website, Happy became the first elephant to "pass" the mirror recognition test, which purportedly indicates an animals' self-awareness, in 2005. That same year, the site notes, her enclosure-mate Sammie was euthanized following kidney failure, and because she doesn't get along with any of the zoo's other elephants, she's been virtually alone since.

Following Sammie's euthanization, the zoo said it would end its elephant captivity once another of their elephants died, though they haven't done so yet. But because Happy has remained in good health despite now being older than 50 years old, she has become "The World's Loneliest Elephant," and is, as the New York Post noted in 2012, often kept in cages that are only about double the length of her body.

Happy's case, which will be seen before New York's state Supreme Court, is one of many that the NRP and other organizations are undertaking to establish more rights for non-humans. And given that "corporate personhood" is a thing, there is, at least, legal precedent for such cases.

READ MORE: Happy the Elephant Has Lawyers Arguing to Free Her From the Zoo [The Wall Street Journal]

The Humanity!
Chimpanzee Star of "Buddy" Found Alive After His Owner Allegedly Faked His Death
6. 6. 22
Read More
Elephant Graveyard
Hundreds of Elephants Suddenly Dropped Dead Because of Neurotoxin, Experts Say
9. 24. 20
Read More
Elon Tusk
Poaching Is Forcing Elephants to Evolve Away From Having Tusks
11. 9. 18
Read More
+Social+Newsletter
TopicsAbout UsContact Us
Copyright ©, Camden Media Inc All Rights Reserved. See our User Agreement, Privacy Policy and Data Use Policy. The material on this site may not be reproduced, distributed, transmitted, cached or otherwise used, except with prior written permission of Futurism. Articles may contain affiliate links which enable us to share in the revenue of any purchases made.
Fonts by Typekit and Monotype.