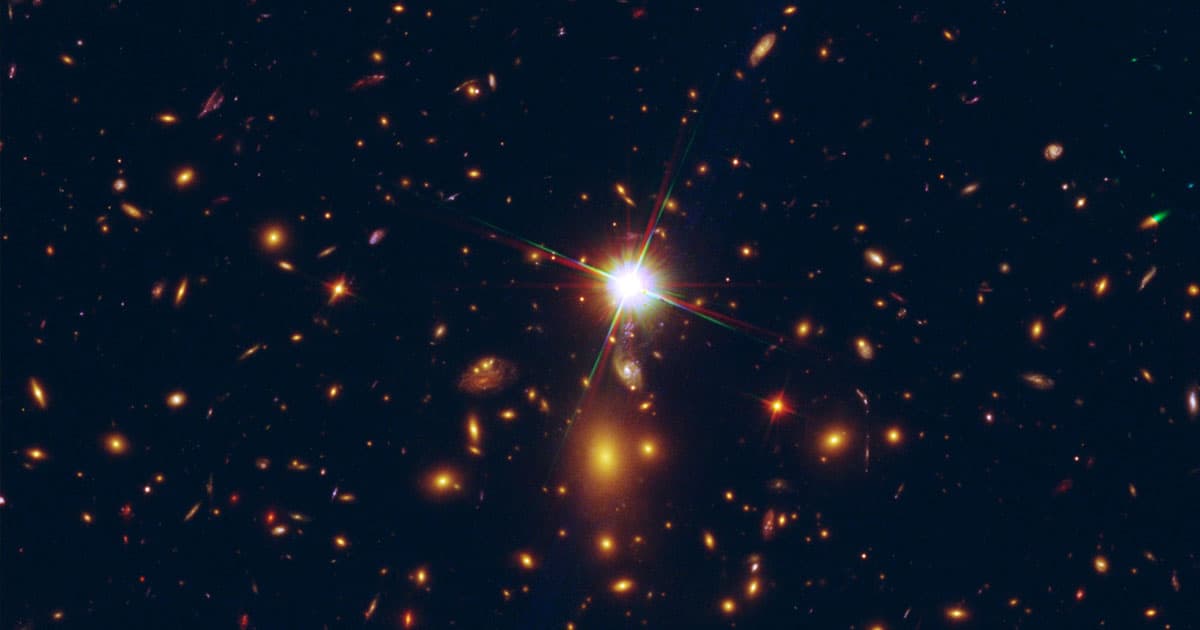 "Nobody’s ever seen a star this highly magnified, not to mention a galaxy."

"Nobody’s ever seen a star this highly magnified, not to mention a galaxy."

NASA's James Webb Space Telescope has snapped a photo of the most distant star in the known Universe some 12.9 billion light-years away — and even as a tiny dot, it's a sight to behold.

A group of astronomers, who go by the name Cosmic Spring JWST, posted the new image of the star named Earendel — which was named after a character in JRR Tolkien's novel "The Silmarillion" — to Twitter on Tuesday, pointing out that it's "the most distant star known."

You can see Earendel as it's lensed by the cluster, WHL0137-08, in the center of the image! Here is a zoom-in on the star itself! Stay tuned for an update from the science team! pic.twitter.com/3mfYZ0WTNg

The image, which was taken by the James Webb telescope over the weekend, isn't technically the first time we've gotten a glimpse of the star.

Earendel was first spotted by the telescope's predecessor, the Hubble Space Telescope, back in March. As NASA noted in a statement at the time, the star existed within the first billion years after the Big Bang.

The star is located within the Cetus constellation, which, in turn, is located in the Sunrise Arc galaxy, a galaxy named after its crescent shape.

The James Webb Space Telescope was able to spot the distant star thanks to gravitational lensing, taking advantage of massive galaxy clusters bending the light from objects behind them.

In fact, Earendel perfectly aligned with the cluster in front of it. "That’s a really lucky alignment," Dan Coe at the Space Telescope Science Institute in Maryland, and team member of the new discovery, told New Scientist. "Nobody’s ever seen a star this highly magnified, not to mention a galaxy."

It's an astonishing new record. In fact, the star is more than ten billion light-years more distant than the next-furthest star we've ever seen, according to New Scientist — and the James Webb space telescope is only getting started.

Psychological Warfare
Experts Excoriate NASA Report Claiming James Webb Wasn't Homophobic
11. 19. 22
Read More
Outing Life
Swiss Government Scientist Says We May Be on the Brink of Discovering Alien Life
9. 13. 22
Read More
Nightmare Fuel
This Horror Story About the Webb Telescope Will Chill Your Bones
7. 11. 22
Read More
+Social+Newsletter
TopicsAbout UsContact Us
Copyright ©, Camden Media Inc All Rights Reserved. See our User Agreement, Privacy Policy and Data Use Policy. The material on this site may not be reproduced, distributed, transmitted, cached or otherwise used, except with prior written permission of Futurism. Articles may contain affiliate links which enable us to share in the revenue of any purchases made.
Fonts by Typekit and Monotype.