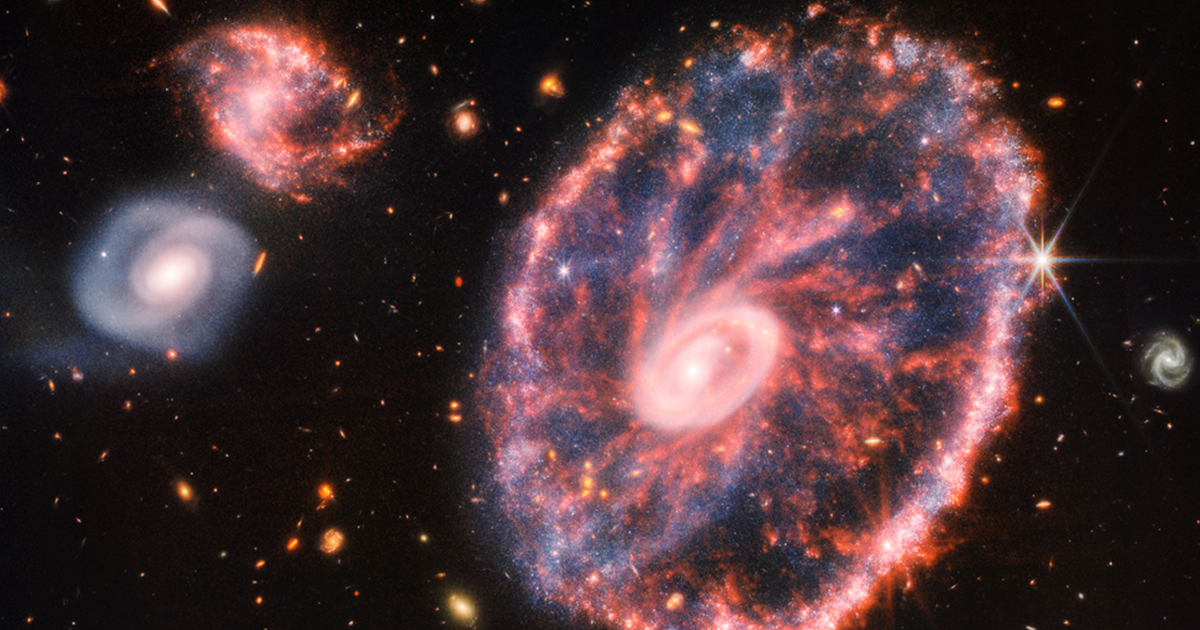 NASA's revolutionary James Webb Space Telescope just dropped an amazing new image of the "Cartwheel Galaxy" in greater detail than ever seen before.

In a statement, NASA described how the telescope "peered into the chaos of the Cartwheel Galaxy," which has an active black hole at its center — and happens to closely resemble a wagon wheel as well.

As the European Space Agency notes in its post about the same image, this gorgeous capture is not only a feast for the eyes, but it will also help astronomers better understand how stars are formed.

This detailed new image taken by #Webb peers into the chaos of the Cartwheel Galaxy 🛞 The image unveils secrets about star formation ✨ & the galaxy’s central black hole, providing new insights into a galaxy in the midst of a slow transformation 👇 pic.twitter.com/SDTSfrdTdE

Located 500 million light-years away in the Sculptor constellation, the Cartwheel Galaxy was formed as "the result of an intense event — a high-speed collision between a large spiral galaxy and a smaller galaxy," according to NASA, the latter of which was not captured in the image.

As NASA notes, the galaxy, which was "presumably a normal galaxy like the Milky Way before its collision," is very much in flux and will continue to transform.

In a Twitter post announcing the incredible find, NASA's Webb Telescope account joked that it was "time to reinvent the wheel" — a pithy quip that could very much be applied to the telescope itself, as it continues to revolutionize not only our understanding of star formation, but also of the universe at large.

More on the JWST: Glitch Made NASA Scientists Think The James Webb Might Be Dead

Psychological Warfare
Experts Excoriate NASA Report Claiming James Webb Wasn't Homophobic
11. 19. 22
Read More
Outing Life
Swiss Government Scientist Says We May Be on the Brink of Discovering Alien Life
9. 13. 22
Read More
Nightmare Fuel
This Horror Story About the Webb Telescope Will Chill Your Bones
7. 11. 22
Read More
+Social+Newsletter
TopicsAbout UsContact Us
Copyright ©, Camden Media Inc All Rights Reserved. See our User Agreement, Privacy Policy and Data Use Policy. The material on this site may not be reproduced, distributed, transmitted, cached or otherwise used, except with prior written permission of Futurism. Articles may contain affiliate links which enable us to share in the revenue of any purchases made.
Fonts by Typekit and Monotype.