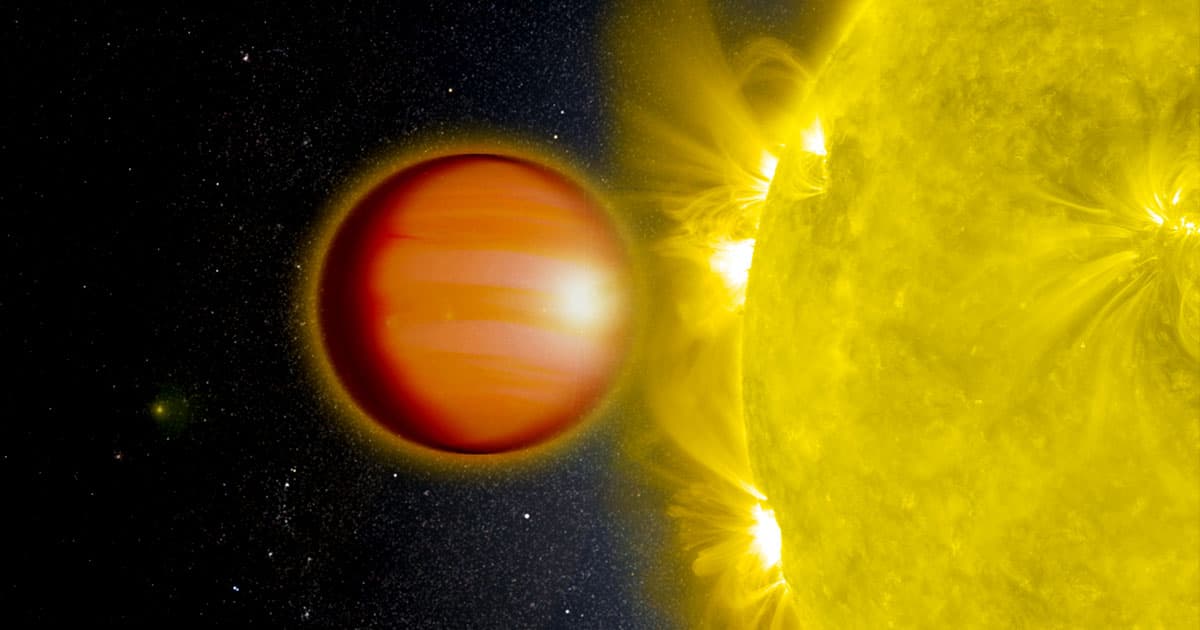 Yet another spectacular discovery.

Yet another spectacular discovery.

NASA's James Webb Space Telescope has made the first "clear detection" of carbon dioxide in the atmosphere of a planet beyond our solar system, according to NASA.

Unfortunately, this particular exoplanet isn't likely to harbor life as we know it. The gas was discovered in the atmosphere of WASP-39 b, a hot gas giant, which is a blistering 1,600 degrees Fahrenheit.

But it is a potentially significant discovery that could give us invaluable insight into the evolution of exoplanets, and possibly spot signs of the gas in other rocky Earth-like planets as well. And, at the end of the day, it's just another cool finding from the James Webb.

The exoplanet has a diameter roughly 1.3 times greater than Jupiter, according to NASA, and orbits its star extremely closely every four Earth-days, some 700 light-years away.

While scientists have been able to confirm the presence of other substances including water vapor and sodium in other planets' atmospheres, the incredible sensitivity of Webb's instruments has allowed astronomers to add carbon dioxide to the list.

The space observatory made the discovery by measuring the exoplanet's brightness across a wide spectrum of wavelengths using the observatory's Near-Infrared Spectrograph (NIRSpec).

"As soon as the data appeared on my screen, the whopping carbon dioxide feature grabbed me," said Zafar Rustamkulov, Johns Hopkins University graduate student and James Webb scientist, in a statement.

The discovery could lead to even more exciting discoveries like it.

"Detecting such a clear signal of carbon dioxide on WASP-39 b bodes well for the detection of atmospheres on smaller, terrestrial-sized planets," said Natalie Batalha, team lead and researcher at the University of California at Santa Cruz.

Astronomers can now use the data to learn how exoplanets like WASP-39 b evolved over time.

"By measuring this carbon dioxide feature, we can determine how much solid versus how much gaseous material was used to form this gas giant planet," said team member Mike Line from Arizona State University, in the statement.

In only a short period of time, in other words, NASA's revolutionary space observatory is already turning the world of astronomy on its head.

"In the coming decade, JWST will make this measurement for a variety of planets, providing insight into the details of how planets form and the uniqueness of our own solar system," Line added.

More on exoplanets: Researchers Want to Use the Sun As a Giant Telescope to Look for Aliens

Lonely Planet
Scientists Find Nearby Planet the Same Size of Earth, Plan to Search It for Life
Feb 5
Read More
Shoo
Scientists Warn Giant Asteroid Is Actually Swarm, Nearly Impossible to Destroy
Jan 24
Read More
A Sip of Opal
NASA Discovers Precious Gemstones on Mars
Jan 9
Read More
+Social+Newsletter
TopicsAbout UsContact Us
Copyright ©, Camden Media Inc All Rights Reserved. See our User Agreement, Privacy Policy and Data Use Policy. The material on this site may not be reproduced, distributed, transmitted, cached or otherwise used, except with prior written permission of Futurism. Articles may contain affiliate links which enable us to share in the revenue of any purchases made.
Fonts by Typekit and Monotype.