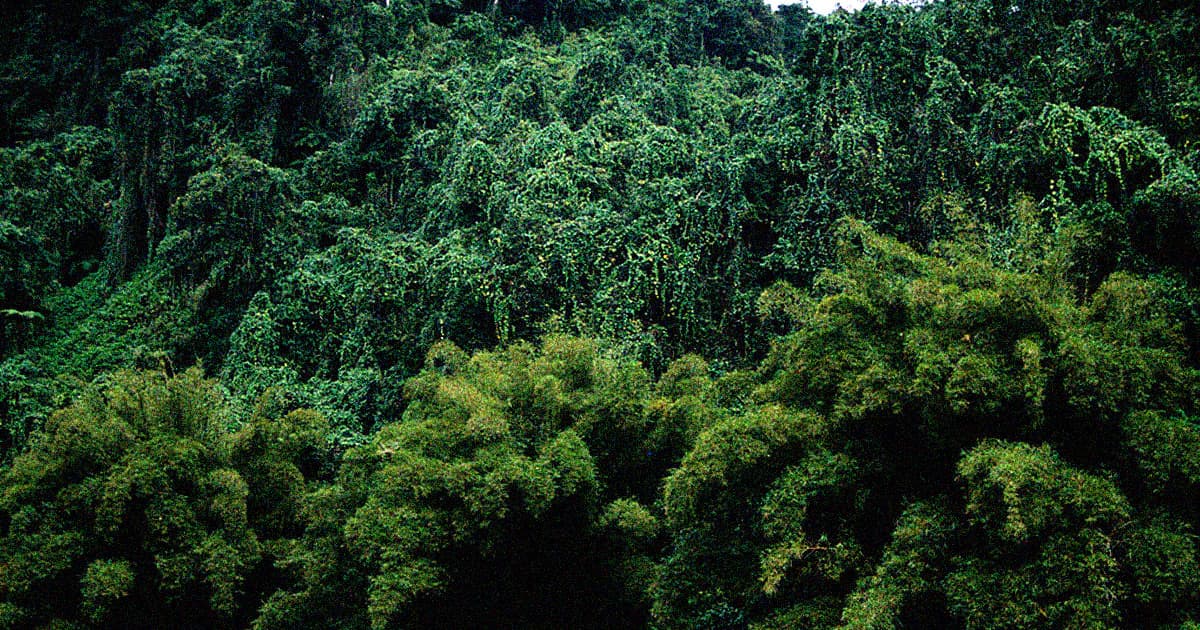 Fiji's second largest island, Vanua Levu, is being absolutely overrun by vines, The Guardian reports, in a dramatic display of the sheer power of nature.

Culprits abound. An invasive species introduced by US troops during WW2 is largely to blame, exacerbated by other challenging species and fierce natural disasters that are choking out competing flora.

Experts have long predicted that climate change would cause storms such as tropical cyclones to become more intense. Indeed, since the 1980s, scientists have observed an increase in the intensity and number of storms that can't be chalked up due to natural variation over time, suggesting climate change is likely to blame. Here, they believe, we're seeing yet another an effect of that planetary imbalance: nature going haywire, as evidenced by the Guardian's extraordinary photography of the phenomenon.

Species including kudzu, a vine from the morning glory family, are literally engulfing entire tree canopies over several miles. (Seriously: we beg you to check out the Guardian's photography.)

Other species such as Merremia peltata, while present in the Pacific region for hundreds of years, only became invasive over the last couple of years since tropical cyclones have grown in intensity, according to the paper's reporting.

Local residents are struggling to keep paths clear of the vines. Cultivating other plants is also becoming increasingly difficult.

But there's a silver lining to the trend as well. Villagers have figured out a way to use one of the vine species as string, allowing them to bundle taro roots together at the market.

It's a dramatic demonstration of the unexpected consequences of climate change — a pertinent reminder that rising tides are far from the only threat facing humanity.

READ MORE: The Fijian island being strangled by vines [The Guardian]

Charlotte's Web
Experts Say That Those Giant Spiders Falling From the Sky Are Good, Actually
3. 10. 22
Read More
Death From Above
Autonomous Drones Are Dropping Rat Poison Bombs on This Island
1. 24. 19
Read More
Asian Ticks on New Jersey Sheep? Invasive Species Are a Reality of Our Future
2. 28. 18
Read More
+Social+Newsletter
TopicsAbout UsContact Us
Copyright ©, Camden Media Inc All Rights Reserved. See our User Agreement, Privacy Policy and Data Use Policy. The material on this site may not be reproduced, distributed, transmitted, cached or otherwise used, except with prior written permission of Futurism. Articles may contain affiliate links which enable us to share in the revenue of any purchases made.
Fonts by Typekit and Monotype.