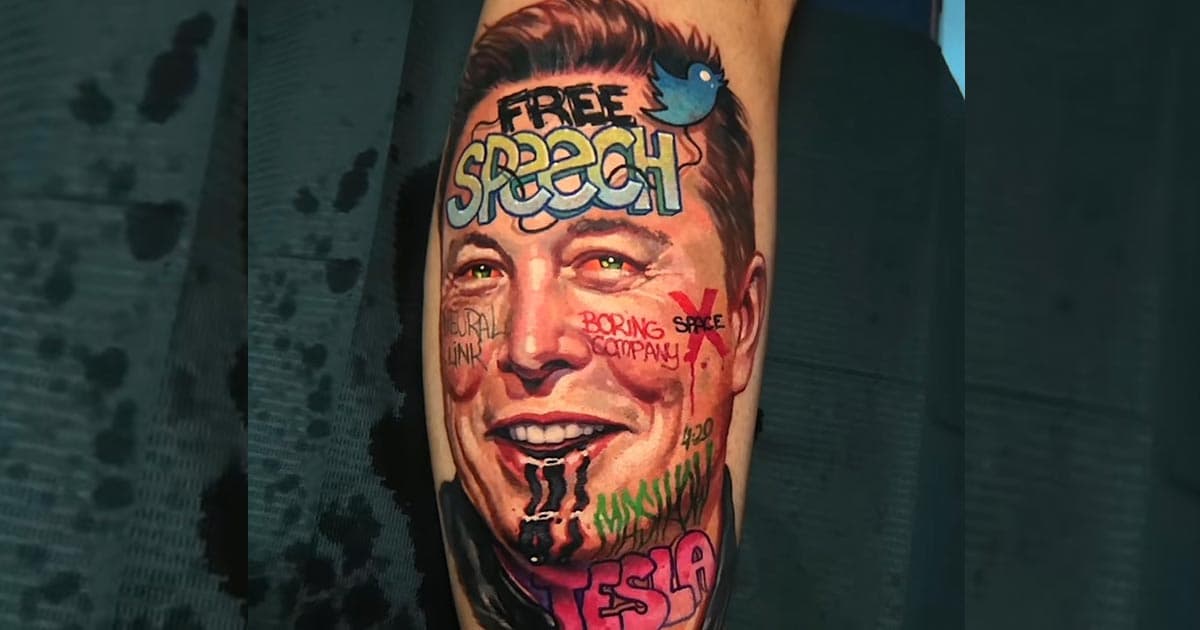 We Are in Awe of This Absolutely Horrifying Elon Musk Tattoo

"I genuinely don’t know if this is ironic or a fanboy."

"I genuinely don’t know if this is ironic or a fanboy."

A New York-based tattoo artist who goes by the moniker Mashkow has really outdone themselves with one of the most grotesquely fascinating Elon Musk tattoos we've ever seen.

An image circulating online shows the billionaire CEO's face imprinted in full color on the forearm of the artist's client, throwing the Twitterverse into a fit of rage and confusion.

The depiction is truly a sight to behold. The tattoo shows Musk awkwardly smirking with red tinted eyes. The names of his companies, including "Boring Company" and "Tesla," alongside what appear to be "X Space" and "Neural Link," are scrawled in messy letters across his cheeks and neck. Oh, and "Free Speech" is emblazoned on Musk's forehead in graffiti-style font, next to the Twitter bird, in a reference to the CEO's obsession with turning the site into an "arena for free speech. And just for good measure, something appears to be drizzling from the entrepreneur's lower lip.

Naysayers were quick to point out some issues with the ink.

It's a tattoo so hideous that it makes us question the true intention behind it. Is it meant to be a commentary on society's current obsession with the entrepreneur? Or was it simply a case of astronomically bad taste?

Given the artist's previous and extensive work, which can be viewed on their Instagram account, it's likely the former — or, perhaps, a little bit of both.

"I genuinely don’t know if this is ironic or a fanboy," one Twitter user wrote in response to the image.

It's not a stretch to assume the artwork was meant to evoke this kind of visceral reaction. Besides, art is in the, well, bloodshot eyes of the beholder.

But given the fact that there's simply no way this tattoo will age gracefully, we wouldn't be shocked if the client will eventually have a moment of regret.