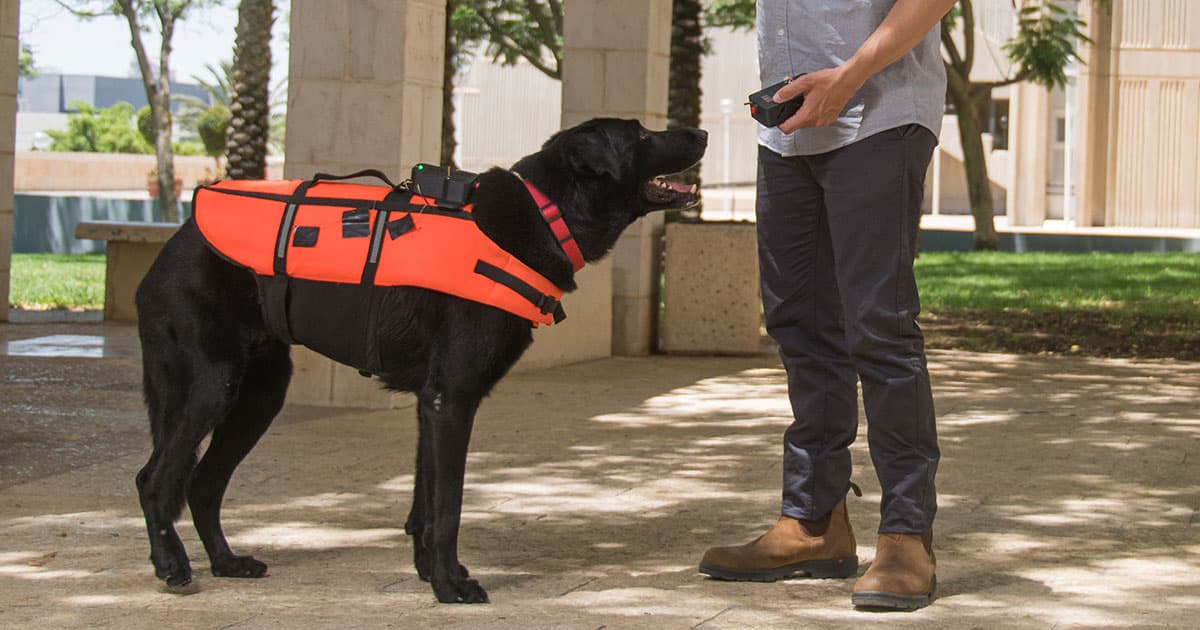 Dogs were trained to respond to vibrations sent from a remote control.

7. 10. 19
Jonathan Atari/Ben-Gurion University of the Negev

Dogs were trained to respond to vibrations sent from a remote control.

A new vibrating vest could help extremely good working dogs perform their jobs better than before.

The vest, basically an off-the-shelf dog harness equipped with communication gear and four vibrating motors, can give dogs tactile feedback or be used to issue commands from a distance. The ultimate goal is to give a high-tech upgrade to dogs working jobs that humans and robots can't do.

Dogs can generally traverse rough or shaky terrains better than robots. With the new vest, people would be able to steer the rescue dogs like a robot without worrying that they will trip, fall, and break.

"Our research results showed that dogs responded to these vibrotactile cues as well or even better than vocal commands," Amir Shapiro, robotics director at Israel's Ben-Gurion University of the Negev, said in a press release sent to Futurism.

Shapiro and his team have only tested their device on one dog, according to a yet-unpublished research paper reviewed by Futurism that will be presented at Tokyo's World Haptics Conference on Friday.

The dog in question is a six-year-old Labrador retriever and German shepherd mix. He learned a variety of commands like walking in certain directions, returning to his handler, or interacting with nearby objects, but one dog does not a robust study make. Shapiro's team plans to test more breeds while adding more capabilities to the vest.

More on dogs with jobs: Scientists Are Calling For More Dogs in Space

FROM THE DEPT. OF THINGS TO BUY
The Best Smart Glasses for 2022
Oct 18
Read More
It Puts the Wearable on the Skin
This Wearable Uses Your Body Heat as an Energy Source
2. 23. 21
Read More
Main Screen Turn On
FCC Clears Google To Pursue "Minority Report"-Like Gesture System
1. 2. 19
Read More
+Social+Newsletter
TopicsAbout UsContact Us
Copyright ©, Camden Media Inc All Rights Reserved. See our User Agreement, Privacy Policy and Data Use Policy. The material on this site may not be reproduced, distributed, transmitted, cached or otherwise used, except with prior written permission of Futurism. Articles may contain affiliate links which enable us to share in the revenue of any purchases made.
Fonts by Typekit and Monotype.