This Wearable Uses Your Body Heat as an Energy Source

"In the future, we want to be able to power your wearable electronics without having to include a battery." 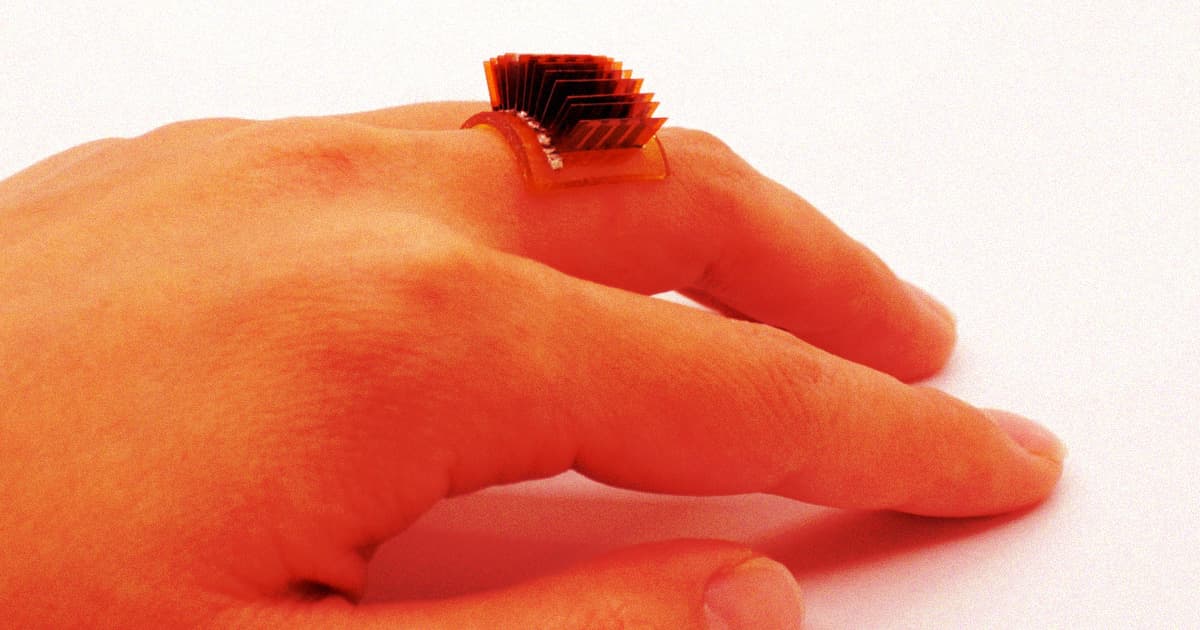 A team of researchers at the University of Colorado at Boulder have developed a wearable that can tap into its wearer's natural body heat to virtually turn the human body into a battery, no lithium-ion battery required.

The bendy device can shape itself to be in contact with the contours of the skin and can be worn like a ring or bracelet.

"In the future, we want to be able to power your wearable electronics without having to include a battery," Jianliang Xiao, UC Boulder associate professor and senior author of the paper published in the journal Science Advances this month, said in a statement.

So far, the small device can generate a single volt of energy. While that doesn't sound like a lot, it's already enough to power small-scale electronics including watches or fitness trackers.

Xiao argues the new device is far more environmentally friendly as a result of being fully recyclable. It can even heal itself, like a kind of electronic skin.

"Whenever you use a battery, you’re depleting that battery and will, eventually, need to replace it," he said. "The nice thing about our thermoelectric device is that you can wear it, and it provides you with constant power."

The device works thanks to a series of thin thermoelectric chips being inserted into a base made out of a stretchy composite called polyimine. Liquid metal wires connect these chips to allow for a current to flow.

The concept is simple. As the skin heats up, the thermal energy radiates outwards. The device takes advantage of this flow rather than letting the radiated heat go to waste.

The wearable can easily be scaled up, the researchers say.

"What I can do is combine these smaller units to get a bigger unit," Xiao said. "It’s like putting together a bunch of small Lego pieces to make a large structure. It gives you a lot of options for customization."

But we're still at least five to ten years out before the technology makes its way into the wearables of the future, according to the researcher.

Read This Next
Skin Deep
Scientists Invent Artificial Skin That Can Feel Pain
Main Screen Turn On
FCC Clears Google To Pursue "Minority Report"-Like Gesture System
Futurism
New Electronic Skin Allows You to Manipulate Virtual Objects
Futurism
Alexa Is Coming to Wearables Thanks to Amazon's New Developer Kit
Futurism
The World's Most Advanced Wireless Earphones May Finally Be Here
More on Robots & Machines
FROM THE DEPT. OF...
Thursday on futurism
Best Charging Stations in 2022
FROM THE DEPT. OF...
Wednesday on futurism
Best Vintage Turntables in 2022
FROM THE DEPT. OF...
Wednesday on futurism
Best Gaming Chairs Under $100
READ MORE STORIES ABOUT / Robots & Machines
Keep up.
Subscribe to our daily newsletter to keep in touch with the subjects shaping our future.
+Social+Newsletter
TopicsAbout UsContact Us
Copyright ©, Camden Media Inc All Rights Reserved. See our User Agreement, Privacy Policy and Data Use Policy. The material on this site may not be reproduced, distributed, transmitted, cached or otherwise used, except with prior written permission of Futurism. Fonts by Typekit and Monotype.