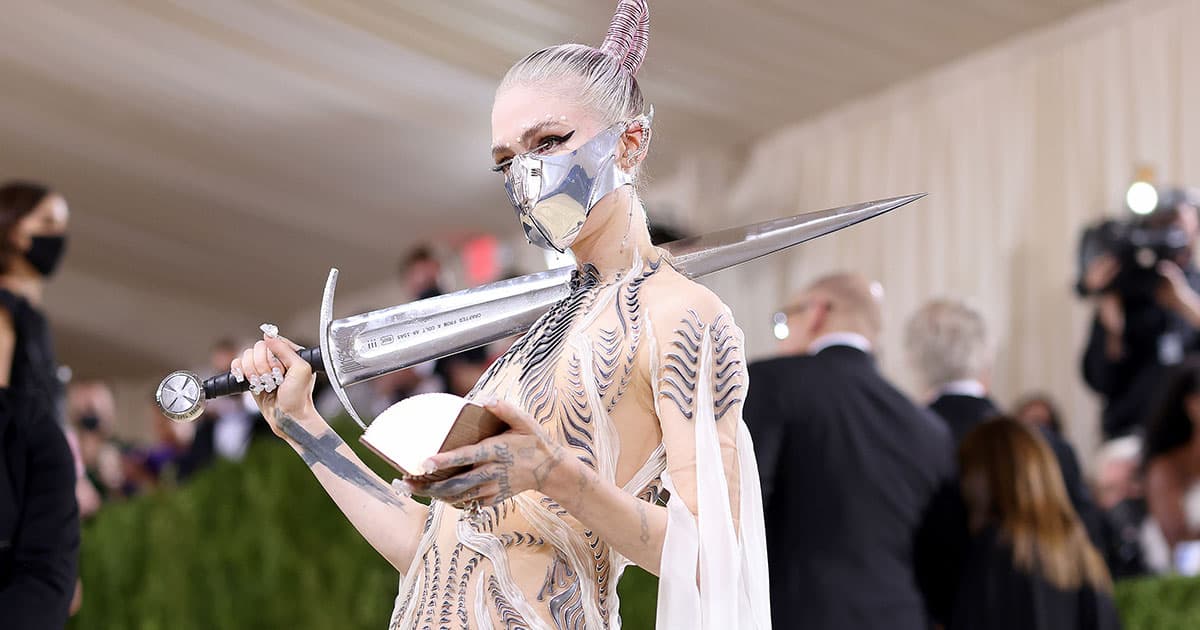 It helped complete her "Dune"-inspired ensemble.

It helped complete her "Dune"-inspired ensemble.

Pop star and noted AI communist Claire "Grimes" Boucher showed up at the Met Gala dressed to kill — and we mean that literally, as she brought a sword made out of an AR-15 semi-automatic rifle to the swanky event Monday night.

This year, the event was themed after its new exhibit "In America: A Lexicon of Fashion," according to Vogue. Celebrities typically enjoy stretching the limits of the night's theme to dress up in wild outfits, and Grimes was no exception.

"It’s not a prop sword," Grimes told Vogue. "I tried to pick it up and this is not really a one-handed situation."

She went on to describe the weapon in detail, saying that it was "based on a western European sword from the end of the Middle Ages around 1400." She later added that it was "cast from a Colt AR-15A3."

Doubling down on the apocalyptic vibe, the "Oblivion" singer's outfit for the night was inspired by Frank Herbert’s "Dune," which is being adapted later this month as a major motion picture directed by Denis Villeneuve.

"We were working with the 'Dune' movie people," Grimes told Vogue, adding that they wanted to work with her as a "professional fan, or like, an influencer or something."

Though the folks behind the "Dune" movie didn’t end up hiring Grimes in any official capacity, she decided to embrace the film and novel's pastiche with an outfit that was "'Dune'-esque," according to the magazine.

The outfit reportedly took 900 hours to create and included a shining silver mask, platform boots, and an illuminated book to go with her sword.

READ MORE: The Making of Grimes’s "Dune-esque" 2021 Met Gala Look—Plus, the Meaning Behind Her Sword [Vogue]

All Tomorrow's Hackers
Grimes Says She Got Hackers to Shut Down a Blog She Didn't Like
3. 26. 22
Read More
New Baby Just Dropped
Elon Musk's New Baby's Weird Name, Explained
3. 10. 22
Read More
Rube Goldbergian
The Dune NFT Project Is Back With an Inscrutable New Scheme
3. 9. 22
Read More
+Social+Newsletter
TopicsAbout UsContact Us
Copyright ©, Camden Media Inc All Rights Reserved. See our User Agreement, Privacy Policy and Data Use Policy. The material on this site may not be reproduced, distributed, transmitted, cached or otherwise used, except with prior written permission of Futurism. Articles may contain affiliate links which enable us to share in the revenue of any purchases made.
Fonts by Typekit and Monotype.